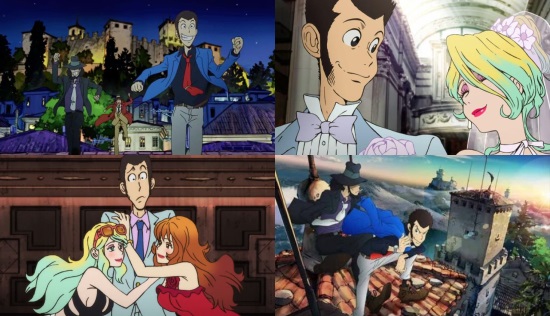 He’s one of anime’s most enduring, recognisable and popular characters. He’s worked with many big names in the industry including Hayao Miyazaki in his critically acclaimed feature debut. He is of course the dashing, the daring, the devious Lupin the 3rd and now his first TV series since 1985 (not counting the spin-off show A Woman Called Fujiko Mine) and his first series ever to reach the UK legally as far as we can tell (again barring the aforementioned spin-off) is finally coming to us via Crunchyroll who’ve picked the show up mid-season -a delay one suspects was caused by the weird exclusivity deal with Italy. So with introductions out of the way let’s see if Lupin can steal the hearts of the UK!

Our story picks up in San Marino, with Lupin in a tux next to a beautiful woman in a white dress. No, Fujiko hasn’t finally submitted to his charms. Rather Lupin is about to marry the actress, model designer and millionaire Rebecca Rossolini. However Zenigata and Lupin’s friends are all less than thrilled by this happy day and all of them believe that Lupin has a bigger goal in mind than settling down from his life of crime.... from then on it’s a never-ending stream of adventures as Lupin and the whole gang take Italy by storm, dealing with everything from ghosts to protection rackets and the Mona Lisa, not to mention the constant need to evade Inspector Zenigata’s clutches.

Lupin the 3rd is a spectacularly good series and chief amongst its assets have always been its characters. By this point the gang are all so timeless and well-known that they can be (and are) put into any situation imaginable and have the audience both accept it and be utterly on board for the fun they know is set to come. Who can blame them when you have not only the charming leading man himself but also the likes of Goemon, Jigen and of course Mine Fujiko herself – arguably one of, if not the, sexiest, strongest and most iconic female characters anime has ever produced! To go with them are a whole variety of one-off and recurring characters who are great within the confines of their episodes. There is of course Lupin’s blushing bride Rebecca too, who proves to be a fantastic foil to both Lupin and Fujiko and is so much fun that you can’t help but hope that the creative team decide to bring her in as a permanent member of the gang in future adventures. This is all helped along of course by fantastic writing, which blends comedy and action together incredibly consistently over these first 14 episodes in a way most Western equivalents can only dream of.

Special mention has to be made to the series opening and ending sequences which are frankly two of the best such sequences you’ll ever see. Thankfully both of them ditch the horrendous Italian versions meaning that we get ‘Theme from Lupin III 2015’ by You & The Explosion Band, a brilliant Jazzy number set to a series of visuals that are utterly gorgeous and look like the glorious love child of a classic Bond film opener and the intro to Top Gear. Closing the series out is ‘Say it, or I won’t give you my love’ by Sayuri Ishikawa which contrasts the opening sequence with an ultra-classy number set to visuals which bring to mind the arthouse Italian films of the 70’s. It’s not just the credits sequences either. The soundtrack is great throughout and the series' stylised visuals are never less than brilliant. Admittedly it is somewhat of a disappointment that the style and more adult tone of A Woman Called Fujiko Mine has been jettisoned but when the series is of such good quality it’s easy to let that slide.

Lupin the 3rd Part 4 is unquestionably one of the best shows currently airing. It looks and sounds great, the stories play out brilliantly and pretty much every gag hits its mark. Admittedly catching up with the show after Crunchyroll’s put up fourteen episodes all at once might seem a bit daunting but frankly that time will fly by and you’ll be preparing a water pistol, a mask, a hot air balloon, an exploding hamster and all the other gear needed to steal away the remaining episodes from whatever vault they’re being held in.

You can currently watch Lupin the 3rd Part 4 in streaming form on Crunchyroll.

10
A spectacularly good series that will leave you plotting to steal the remaining episodes for yourself.
COMMENT AND DISCUSS
blog comments powered by Disqus