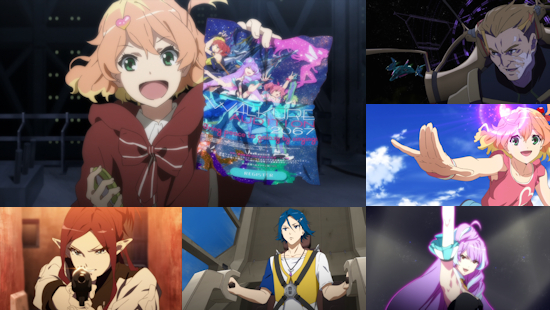 It's the year AD 2067, marking fifty years since humankind left their little planet to emigrate out into the universe. As anyone who has partaken in any previous iterations of this franchise will know however, the big wide universe can be a dangerous place, and Macross Delta introduces us to a very specific problem - Vàr Syndrome, a strange virus which incites violence in those affected by it, causing them to go on what are often highly destructive rampages. Fear not however, for there is a way to reduce or even remove the effects of this virus - the power of song. Enter Walküre, a so-called "Tactical Sound Unit" and an idol group who sing to across the galaxy in the face of danger, backed up by the capable pilots of the Delta Platoon.

From an introduction which explains the lofty and noble careers of Walküre and the Delta Platoon, we're brought down to earth with a bump by two young folks who are not having the best of days. First up we have Hayate Immelmann, a free spirit who is about to lose yet another job on account of his preference for lounging in the sun over actually doing any work. Then there's Freyja Wion, who has stowed away from her home planet of Windermere in the hope of becoming the latest member of Walküre - except she's stowed away to the wrong planet.

However, the chance meeting of Hayate and Frejya leads to an equally unexpected chance meeting with Walküre themselves, as an outbreak of Vàr Syndrome occurs and the group attend to save the day - something they only succeed in doing successfully with an impromptu helping hand from our lead male and female. Having impressed the powers that be (and Walküre's members, as it happens), both individuals are about to undertake the journey of a lifetime, as Frejya gets to try her hand at achieving her dream of becoming Walküre's latest idol while Hayate's abilities piloting machinery offer him a new opportunity on the group's temporary home of Ragna.

As first episodes go, Macross Delta ticks all of the right boxes - three times over if we're being picky, as this Japanese Blu-ray release contains the "Mission 0.89" pre-air of the first episode which was broadcast several months before the show's TV run began, the standard "Mission 01" as episode one's TV broadcast version, and "Mission 01+" which amalgamates all of the footage from the two. Anyhow, technicalities aside, this opener is a great way to sell anyone on the series - it boasts some great music, some fantastic spectacle via its action-packed battle-cum-concert, and some hugely likeable characters that are instantly endearing while managing to avoid most of the pitfalls that leads from previous Macross series have fallen into.

Things have to slow down a little after that breathless first episode of course, but episodes two and three are equally engaging in their own way, allowing us to spend some more time with Hayate and Frejya and watch their surprising naturally organic relationship in the early stages of development while also getting to know some of its wider cast before things get too hectic. Macross Delta won't be winning any awards for its writing, but these first three episodes certainly deliver a solid story bolstered by some decent characters.

Ultimately though, it's that episode upon which we pin all of our hopes and dreams for the series - its combination of idols, planes and combats is executed upon superbly, and although the show's soundtrack can't hope to match Yoko Kanno's efforts on previous iteration Macross Frontier, that doesn't mean that the music on show here is any slouch and there are several terrific tracks contained within these early episodes. On that note (with every pun intended), the series has also learned some important lessons from another successful Satelight franchise in Symphogear, specifically pertaining to its use of diegetic music - although it isn't leaned upon quite as frequently, the fact that characters are singing in the midst of a chaotic battle occasionally causes their voices to be interrupted or otherwise less than perfect as they move and react to circumstances. It's a small thing to focus on, but it does add an extra layer to the show's immersion when it's employed - mix it with our other positive comments, and this is a series that'll leave you wanting more after these early episodes.

As you might expect, the visual presentation of this first volume of Macross Delta is glorious - sporting a decidedly pretty art box for its first three volumes (of nine!), a slip cover with art from Hidetaka Tenjin, and an all-Japanese booklet alongside its Blu-ray Digipak with lots of character design and other artwork for you to marvel over even without being able to read the text. Pop in the disc itself, and you'll find an excellent English subtitle track for all of the main episodes of the series which really can't be faulted but for one or two incredibly minor errors, and a menu screen which also provides English text when you highlight each option in its main menu. Sadly, bonus content isn't subtitled, but chances are you'll still be able to glean some entertainment from the provided comedy shorts (which are genuinely funny), while the audio commentary track, "Making of" feature and karaoke version of Ikenai Borderline will be less useful.

Is it worth £70 for three episode of anime though? Possibly not, but if you're a hardcore Macross fan and living in the knowledge that this series never will - and never can - see an official western release in the foreseeable future, this is going to be your only way to own the series legitimately. If you are tempted, then rest assured that the subtitles on this release won't disappoint, and the overall presentation will be able to sit proudly on your shelf. Oh, and the series itself is shaping up to be a decidedly good one, most importantly of all.

8
Its rip-roaring first episode will hook you, while the instalments that follow also do plenty to draw you in. Welcome to Walküre world, even if the admission fee will be too off-putting for many.
COMMENT AND DISCUSS
blog comments powered by Disqus