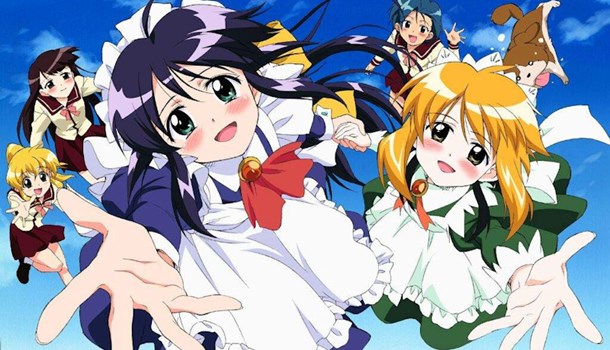 I am in two minds about this second volume of Something More Beautiful. One of my minds contains dread and the other contains happiness, glee and just a little smidgen of something that I cannot quite identify. The dread is because I know that the series is quickly running out and that infernal timer keeps ticking down to the unfortunate inevitable; the other something... well, you will see.

The first volume ended with the Misato residence celebrating Christmas, so it seems fitting that in true chronological fashion this volume begins with the traditional Japanese New Year celebrations, with the usual wishes for the new year, and the semi-violent rivalry between the Whack-a-maid Mahoro and Saori "Mammary Monster" Shikijo, which ends in the usual mutual defeat as Saori’s advances towards Sugaru are swiftly ended by the ever-protective Mahoro. It’s nice to have a semi-predictable domestic environment!

Unfortunately this lovely little domestic scene seems destined not to last, as it becomes evident that the final battle for planet Earth is imminent and there are powers behind the scenes who want to end the happy life which the retired military android Mahoro has made for herself. The epic battle is coming... and it will of course be covered in the final volume.

Without giving too much away about what is revealed at the end of this volume and at the start of the next I will state that the frolics and fun, which have pervaded every single episode to date alongside the rivalries, the innuendo and the dialogue, end. At the climax of this volume, the story completely changes tack. It stops being as fun and becomes serious as Mahoro has to fight for those who she loves. Its tear jerking and its frankly cruel, but I shall save all this for my review of volume three.

The series retains its light and airy feel in terms of animation which is smooth and colourful, even within those moments of emotional onslaught, and the Japanese actors have done an excellent job of breathing plenty of life into this series, making sure that every character is unique and emotive which further enhances my sorrow that it has to end in such a way.

The first four episodes of this volume retain the comical telling of the adventures of the Misato residence and if you have enjoyed the previous four volumes of Mahoromatic, then these are simply un-missable. However, the fifth episode begins the final arc which leads to that inevitable event which has been foreseen since the first episode of the first season. The advice from me and others within the community is that if you want Mahoromatic to retain its funny, perverse and lovable memories, then stop at episode ten of the second series and do not proceed forth. Do not give into the temptation of the cliff-hanger at the end of the episode as it will bring nothing but unhappiness and sadness. For those completists like me who simply have to see how it ends, no matter the cost, then it’s time to dive into the final episodes of Mahoromatic.

Actually, I think I’ll go and buy the manga instead; it'll save me a lot of impending heartache...