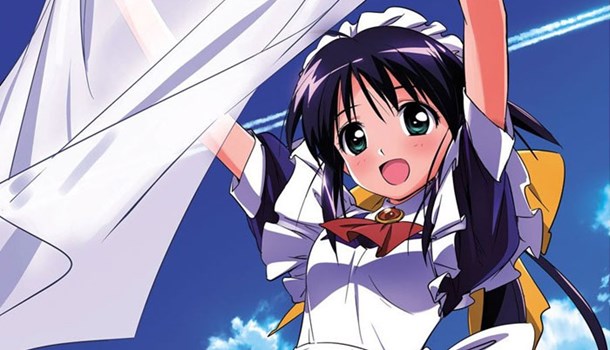 The final disc of Mahoromatic has something of a reputation amongst fans - It's not necessarily a good reputation either and the advice given by most, including myself, is not to watch it if you want the series to stay light and fluffy. Well, until now, I hadn’t actually seen it for myself. I know how it finishes, but the anime is clearly very different from the manga in the way it ends.  Thus, I intend on contradicting my earlier recommendation by detailing why I have enjoyed this final disc of Mahoromatic so much and why you need to see it.

To start off, the end is not as bleak as expected. Yes, Mahoro's death is inevitable. But that is not exactly news to her, as she has known all about her lifespan and mortality. However, what is new to her is that she is vulnerable to the weapons the Management throw at her and she finally realises that the last thing she wants is to die and leave her perfect little life. So, I smiled at this. But things begin to change...

It is at this point that someone decides to throw the aircraft carrier, the USS Enterprise(!!) at the Saint spaceship orbiting the moon. Now, i don’t know about you, but this is perhaps the world’s best example of a declaration of war. Without spoiling too much, it all hits the fan and people die.

The ending itself is a surprise and is rather beautiful in its own little way; it's actually happy, except for the mental anguish which troubles Sugaru now that his beloved Mahoro is gone. However, as the real final episode details, all is not lost and even though the Mahoro he knew is dead, he still gets to be with her in the end in some form or another. (How vague is that!) See?  A happy ending for all!  In my opinion the only thing this ending lacks is complete closure. There are many questions which are frankly answered in the manga but not in the anime which I feel deserve to be detailed. At the very least they should have detailed how Minawa gets on now that she finally gets herself sorted out. Ah well...

Oh, and did I mention that Sugaru becomes a kick-ass space samurai who carves up androids for fun? Yeah. I thought that was cool too.

So this is where it ends.  Twenty-six episodes and one truly special final instalment. A happy beginning combined with a happy end and more naked breasts than an Amsterdam high street. Mahoromatic is going to stay up there as one of my more thoroughly enjoyed series.

However, it does not completely end there; there is more!  MVM have been kind enough to include the legendary Summer Episode on the disc after the final episode of the series. The summer episode is positioned between series one and two and sits almost entirely outside of the main storyline. It is the story of three certain high school boys, surrounded by a harem of six girls and their efforts to keep their pornographic books. It frankly brings a tear to my eye to witness the cunning of these true gentlemen in keeping their dodgy little books hidden from those female eyes. I could stand to learn a thing or two from these guys, true professionals.

Mahoromatic might not be the pinnacle of story telling. It may be one of the more innocently ecchi series out there. But when it comes to putting a smile on your face after a truly awful month of work, nothing can beat it, except perhaps some expert attention from some lovely ladies in a massage parlour. Yes, i went there. Enjoy!

9
I don’t know what all the fuss is about; I loved the ending!