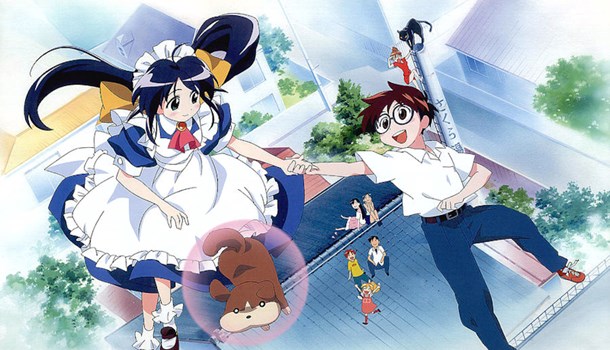 Five years is a very long time to wait for a conclusion to a series which is generally regarded both personally and communally as one of those “must see” shows. In my review of the first series, back in 2005, I primarily focussed on a single aspect of the series, an aspect which will remain anonymous for now. So, five years later, returning to the original series and now the second half of the series have my opinions changed? Find out.

Well, for starters, the series certainly starts with the kind of bang you can expect from an eroge averse android with self-image issues and a perverse male companion, and without even a single recap of the ending of the past series, which is probably for the best. As was the case at the end of the last series, there remains a cold war between the human overlords, the Management and the invading aliens, Saint, with Vesper remaining nice and neutral trying to keep the peace in a Switzerland-esque kind of way. Its all peaceful, with the occasional altercation between the various sides, a few claws here, a few fists there and insults being passed out like early morning editions of the Metro. This pretty much continues until a random young android girl literally falls out of the sky and into the lives of Mahoro and Suguru. When this cute little android turns out to be clumsy, slightly thick and working for the enemy (read: human overlords) who want to capture the android Minawa at all costs, then a single phrase sums up what happens next...

As super weapons go, this destructive pair are a doozy. Almost titillating in their chosen form of destruction, and extremely effective, though an armoured brassiere does strike me as perhaps not the most efficient form of launching a nuclear warhead.

The reason why I was so originally enamoured with this series wasn’t just because of the continuous references to the female anatomy - It is honestly very funny. There are some situations which could only come from a truly twisted and perverse mind. Mahoro’s rampaging breast expansion pump that attacks people at random being the first that comes to mind. I mean, seriously, who saw that coming? Then there is just the actual dialogue which is very well written and I imagine must have been an absolute hoot to dub into English, especially the scenes involving the young-boy obsessed teacher.

Most importantly, the series just does not take itself seriously; even with a semi-serious story, it takes time off to just have fun. The fourth episode for instance consists of Vespar reacting to a serious bomb threat at Suguru’s school which somehow turns from a semi-serious situation into a Harry Hill style chase involving a hidden time capsule containing incriminating evidence. Beautiful.

The only issue with Mahoromatic, and this isn’t an issue this early in series two, is that it ends. Each and every episode finishes with that infernal timer. The time until Mahoro turns off. Every episode is a reminder of the fact that every good thing comes to an end, and Mahoromatic is not an exception to this rule. Don’t let that spoil it for you though.

Additionally, and most importantly of all, a generous five episodes are provided on the first disc, making it the perfect cure for a truly bloody awful day at work, if you ever have these of course.