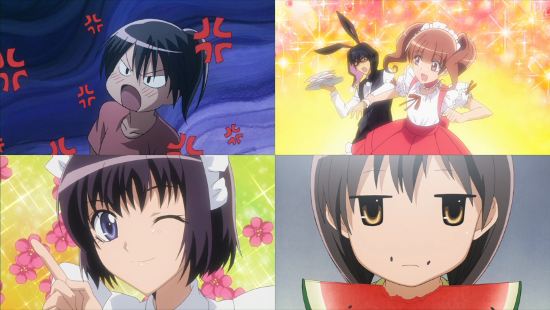 Student Council president and part-time Maid Cafe server Misaki continues to wrestle with everyday life. Frequent tormentor Takumi Usui continues to alternate between getting in her face and saving her hide, being frustrating all the time in both cases. With everyone around her already assuming they are a couple, can Misaki get her head and her heart calm for long enough to sort out their antagonistic relationship?

This set of Maid-Sama continues and even manages to amplify a lot of the sins from the first set, which I previously reviewed here. You can carry a lot of my complaints from that review into this one, honestly. The show continues to ineffectually bumble around grasping at common Romance Misunderstanding storylines and tropes trying to string a story together and string you along at the same time. The more the series tries to lean into these as a source of serious tension the more it tends to unravel as the main couple are utterly unlikable. Not just Misaki, but now the primary male romance lead Usui is utterly intolerable - he goes from jokingly referring to himself as a stalker to actually being one, constantly interfering and being unhealthily possessive to the point of being outright abusive. The show feels downright gross and tone deaf at these points, undermining all attempts at romance or even having interesting main characters. The pair dance around each other acting like obstinate self-destructive blockheads, which has at this point gone so far beyond the pale in both frequency and magnitude that it is painful.

Watching the pair constantly undermine themselves and each other is exhausting, and this is escalated further when the series tries to tack a plot on to proceedings. One two episode storyline (a rarity!) involved a very poorly explained attempt to buy the maid cafe by a recurring villain, which then spirals into a set of challenges with various other, better, characters popping up to meddle. The whole thing ends with a wet fart of a resolution and a possibly cute moment undermined by the main would-be couple in five seconds flat. This set even goes to the step of introducing a rival boy a few episodes in, which it tries so hard for you to see as a valid horse in the race, but the character is so comical and shoe-horned in that even the show itself silently drops him from the running near the end having barely had a chance to mount a challenge. Thus he has to join the boys from the first episode in “goony comedy character” hell. These attempts at gag humour remain, and are as flat and dull as they were in the previous half of the show. The only time that the series feels engaging is when the secondary cast take the stage for some lighter shenanigans, and these provide some of the best moments the series has to offer which much more interesting character interactions and humour.

The show does manage to craft an ending, even if it has to cram the resolution in alongside another resurfacing plotline in a really cack-handed way that dilutes the effect. This is your reward for watching the show, your pot of gold at the end of the rainbow - around 15 minutes of actual cute romance shenanigans which still has to handwave some extraneous plot features to function. But at least there is some small degree of resolution!

The soundtrack from the first half of the series makes an unwelcome return, and if anything is all the more grating due to how obvious it becomes that it only has a few rote tracks at its disposal. Another grating element that outstays its welcome is the series habit of having characters voice SFX and onomatopoeia that appears visually on the screen. This is often done at the same volume of actual speech and obscures it in a frustrating manner - it existed in the first set of Maid-Sama but is even more prevalent and grating in this batch of episodes.

Maid-Sama is not worth your time. It is that simple - the main pair are insufferable, the writing is poor, the presentation is ditchwater dull and the redeeming moments are buried deep under the proceeding spoiling elements. If you were hoping this second set would improve upon the first set, then I’m afraid you will be disappointed.

3
One of the most lacklustre romance tales ever maid.
LATEST REVIEWS