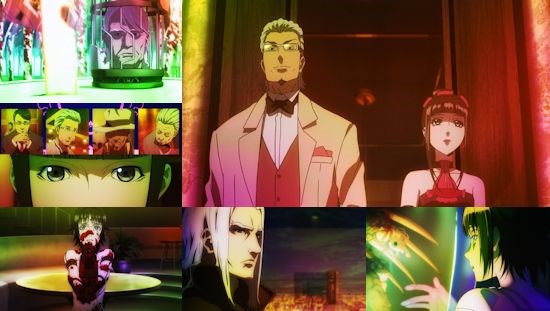 As an anime fan, I've grown used to TV series and movies closing instalments with particularly galling cliff-hangers, which leave you groaning with a mixture of anticipation and frustration at having been left (as their name suggests) hanging. Surely few cliff-hangers have had quite such an audible reaction as the end of the first film in the Mardock Scramble trilogy however, such is the precipice at which it leaves us dangling. Indeed, so great was the cliff-hanger that even upon watching the first two films back-to-back at Scotland Loves Anime in 2011, the end of the film still brought audible groans from the audience even though its resolution was just fifteen minutes away!

Of course, if you've been following the Mardock Scramble trilogy via physical releases you've had to wait far longer for the events at the end of the first film to be resolved, and you'll be pleased to hear that Rune Balot and Boiled's shoot-out which brought us the superb climax to that movie is brought to an end in short order as The Second Combustion begins. With Balot only just escaping with her life and her mouse-cum-weapon partner Oeufcoque in bad shape, Doctor Easter takes his charges to "Paradise" - the home of the technology which created Oeufcoque (and indeed Boiled), and a location with an odd blend of the tranquil and the malicious under one roof.

Aside from its place as the origin of much of both the good and evil at the heart of its world (cue lots of Biblical references alongside the usual slew of egg-based nods), Paradise also proves to be the perfect place to heal both Balot and Oeufcoque's wounds, while the former is also faced with the opportunity to step up her pursuit of Shell and to further prove the usefulness of her powers. Of course, it doesn't take long for any digging into Shell's dealings to come to his attention, and thus Boiled is despatched to Paradise to deal with this irritation.

From here, the second half of the film sees Balot and Doctor Easter devising a plan to procure the vital information that they need for their investigation - the downloaded contents of Shell's memories before they were wiped from his brain. Gaining access to this data means a high-stakes trip to a casino owned by Shell as they try to gamble their way to success, using Balot and Oeufcoque's abilities without attracting the attention of the establishment's security forces.

It's this intense focus within the casino that might prove the biggest turn-off for those who enjoyed the first movie - compared to the largely action-packed, set piece-driven focus of The First Compression, the second half of The Second Combustion is far slower, more deliberate and dialogue heavy in its pacing. In fairness, the film depicts all of these scenes with such visual panache and verve that it does the best job it can at conveying the required information and lending some tension to proceedings via split-screens and flashy imagery, but it still won't be enough to make it compelling for some.

If the prospect of watching someone play Roulette for quarter of an hour isn't too off-putting to you however, then The Second Combustion is a fine movie indeed - some of its concepts stretch its credibility even further than the first film, yet somehow it never quite jumps the shark (if only because they all fly instead) and the whole thing is animated in a stylish, engaging and gorgeous fashion that even our DVD review copy looks the part (although of course the High Definition Blu-Ray release is really the best way to enjoy the film). Aside from its gambling bent, there are still some brief but decent slices of action, and plenty of development surrounding Boiled's character and the relationship between Balot and Oeufcoque to leave everything set up nicely for the third and final film (for which there is a trailer included on this disc to whet your appetite).

While Mardock Scramble is still best served with its original Japanese audio track (thanks almost solely to Megumi Hayashibara's turn as Rune Balot), the English dub is passable for the most part - the lead cast all do their jobs well, and it's only some of the incidental characters that prove to be a little grating or just outright let the side down. The film's subtitles also seem to be without issue from what we saw on our DVD copy.

How much enjoyment you derive from The Second Combustion really depends largely upon what you enjoyed about the first film - if it's the shows core concepts and setting that impressed you then there's plenty more to enjoy here, and similarly if it's the first film's characters that drew you in then you'll be pleased to see them evolved and fleshed out during the second movie. If you're thirsty for action however, this film's far slower and sedate pacing, and its preoccupation with the mechanics of gambling, might make this a far tougher film to sit through than the first.

Personally though, all I can really say is that I'm champing at the bit to lay my eyes on the third and final film in the trilogy.

English and Japanese Dolby Digital 5.1 with English subtitles.  Extras consist of a trailer for the final film in the trilogy, The Third Exhaust, promotional video and "On the way to movie theatres" making of documentary.

This release also contains both the theatrical and director's cut releases of the film, both with English and Japanese audio options available.

7
It doesn't grab the viewer by the collar in the same way as the first film, but The Second Combustion is still an engaging and frequently fascinating middle chapter of this trilogy.
LATEST REVIEWS