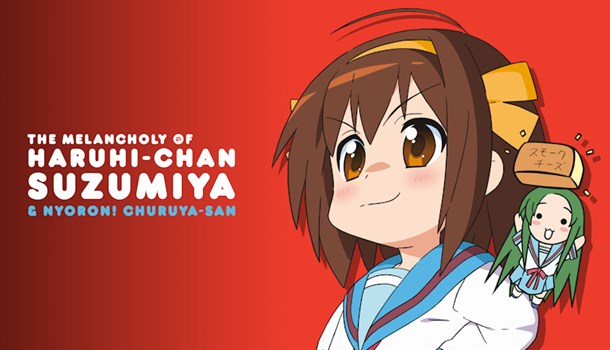 Bundled in with the Season 2 release of The Melancholy of Haruhi Suzumiya is a rather special 4th DVD, one that we thought would be worthy of having its own separated review. Bundled on this disc is part one of “The Melancholy of Suzumiya Haruhi-chan” and “Nyoron! Churuya-san”, a pair of ONA (Original 'Net Animation) series made up of very short episodes. Both originally come from a manga, and we have previously reviewed the first volume of this in the case of “Haruhi-Chan” and found it enjoyable. So how does this double helping of bonus material shape up?

Well, first of all, this is something that is only for superfans of the Haruhi franchise. Both mini-series assume a close familiarity with the source material that they are parodies of and make no attempt to enlighten viewers as to the setting or the cast - so don’t go lending it to friends who have no idea what this whole “Haruhi” lark is!

The first surprise on booting up this DVD is that both mini-series come with an accompanying dub, something that I presumed mere bonus material would not have. The English dub turns out (having double checked with ANN to make sure) to have been recorded by the principle cast from the main Haruhi series.  While a nice thought, the dub cast sounded disconnected and uninterested and so it comes off feeling like a sub-par performance overall. This is doubly so in the Churuya-san mini-series, which relies on careful dead-pan delivery for the majority of its punchlines. Thankfully, there is always the Japanese audio track and subtitles - while mono only like the main Haruhi series this DVD was thankfully free of the audio issues I mentioned in that review.

The shorter of the two features, “Nyoron! Churuya-san” stars a super-deformed version of Tsuruya who has a particular penchant for smoked cheese. The rest of the normal “Haruhi” cast exist as foils to her short, bizarre adventures as she tries to acquire smoked cheese or just goof around. Each episode weighs in at only 2 minutes long but crams a lot of quick-fire absurdity into every one, taking no breaks as it barrels from one gag to the next. This is somewhat of a blessing, as the majority of the jokes rely on the exact same pun and often end up falling flat with an almost audible splat. The art is also somewhat off-putting - the 3D renders look fine when the scene is static but movement is awkward and does the series no favours. Still, the series clocks in at around 10 minutes long all told, and I feel I laughed more than enough during that time to justify the price of admission.

“The Melancholy of Suzumiya Haruhi-chan” also maintains a gleefully swift pace, although it allows itself the luxury of having its episodes stretch to 5 minutes long. The series is a straight adaption of the source manga, keeping the same jokes and outlandish versions of the principal Haruhi cast, all of whom have been turned up to eleven on the wackiness scale. The series riffs on existing events in the main Haruhi storyline, as well as making up additional, increasingly absurd situations as the series continues. One particular favorite aspect of mine is the return of Ryoko Asakura as a tiny super-deformed version of herself who is kept prisoner by Yuki. These jokes in particular are greatly enhanced by the move to animation as they generally involve a lot of swift reactions and physical gags. In transferring the rapid-fire gag series to animation it is clear a lot of care has been taken to maintain the original’s blistering pace and add in extra details only where beneficial, making this series great fun to watch. The Japanese audio track adds a lot to the comedy - the voice actors genuinely sound like they are having fun with the absurd jokes, especially good old Aya Hirano as Haruhi. After a slightly ropey first episode the series quickly finds its legs in the art department and uses its budget well, pulling out the stops when it will really benefit a joke. The thirteen episodes included on this disc went by in a flash, and at the end I wanted to watch through it all again.

As noted at the top of the review, this disc contains “part one” of each series - half of their original episode count. Hopefully part two is forthcoming at a later date, although to the best of my knowledge nothing has been announced (it's slated for a standalone release later in the year - Ed.). All-in-all, this pair of series make for very welcome extras, and a nice treat for any Haruhi fan.

7
A rapid-fire machine-gun of gags for the hardcore amongst Haruhi fans.
LATEST REVIEWS