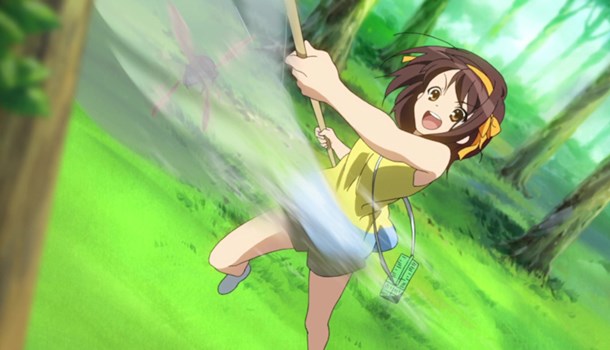 Melancholy of Haruhi Suzumiya, The - Season 2

I went into the second season of Haruhi full of hope - after all, I'm not going to deny that I have a lot of affection for the franchise, being a big fan of both season one of the anime and the light novels released so far. A quick run down for those returning to the franchise, or those new to the whole thing: The Melancholy of Haruhi Suzumiya is a series of tales about the titular Haruhi and a rag-tag band of weirdos that she forces into joining her own personal club at school. Why? She’s bored, that's why. The stories are told from the perspective of Kyon, a normal if sarcastic guy who tries to keep Haruhi in check through many bizarre and fantastical events. So how does this second series shape up?

First, to get the current hot button issue out of the way - the Japanese audio track is mono only, not stereo as purported on the box. To be honest, I did not notice any difference due to the mono audio. Frankly, the audio has much bigger problems, as the Japanese audio on my copy would frequently dip into silence for a second or two before returning to its original level. This was very disruptive every time it happened, and this was present on every disc of the set. There are other authoring issues on this set too - the colour balance always felt sub-optimal, with many scenes looking over-saturated or badly balanced. As a result, I spent a lot of time when watching this set futzing with my TV to see I had somehow buggered up the settings. Add to this frequent ghosting of the subtitles and all in all the release felt haphazardly thrown together.

"But what about the actual show, Elliot, what about the show?" I hear you cry. Well, frankly, its not that good either. This fourteen-episode series is split into three discrete plot lines, two of which are criminally mishandled and a chore to watch. The exception is Bamboo Leaf Rhapsody, the first episode at the start of the series, which is an intriguing little romp that ties together a lot of various events and backstory from the first series.

After this comes Endless Eight, which is probably the biggest elephant in the room in this series. I'm going to delve into some mild spoilers here, so please forgive me. Endless Eight is a plotline where the main cast of the show are, initially unbeknownst to them, stuck in a closed time loop where they repeat the last two weeks of August over and over. Each episode chronicles a full iteration of one of these loops as the cast enjoy their summer, eventually become aware of the closed loop, and attempt to break it so they can resume normal lives.

The biggest issue here is the pacing - the characters figure out the time loop in the second episode of the plotline, which feels like a colossal jump from the first episode where everyone is utterly oblivious. Some intermediate stages would have been nice here, in order to build tension and draw you into the mystery of why the show is replaying the same events each episode. Instead what you get are eight episodes with almost the exact same events occurring in each one, with near zero development from episode to episode. There simply is not enough variety on offer to keep the storyline interesting from episode to episode. Put simply, this arc left a bad taste in my mouth because it is clear that a lot of time and effort was lavished on creating each of these identical episodes, only for them to feel like wasted effort. A lot of this would be easier to swallow if the plotline wrapped up well, but the ending presented comes out of left field (Even though there was so much time available to foreshadow it!) and is so lamely presented that you feel more like groaning than cheering that the ordeal is over. Even more annoying is that Kyon then rams home an explanation of events in the epilogue, just in case you missed what happened. While this may have been an interesting tactic when the show was airing on a weekly basis, the presentation falls flat when presented in a collected set as it is obvious from the episode listing that there will be eight episodes of this storyline.

Following on from this is the third plotline of the set, the Sigh of Haruhi Suzumiya, where Haruhi ropes the main cast into producing an amateur movie for the School's open day. As the film itself has already been presented in Series 1, a lot of the big surprises of this plotline have already been spoiled and as such a lot of the wind goes out of the sails of this particular arc. Sigh exhibits massive pacing issues, which killed any interest I had in watching it stone dead in short order. Quite simply, there is zero tension built up and so when things finally start to escalate in the last half of the arc you feel no compulsion to care. Even more irritating and deadly to the pace is that whenever anything surprising happened, it would first be presented in a confusing manner and then shortly afterwards the main cast would have a long exposition sequence aimed at telling the viewer "Wait, see, this is why that last part was awesome!" The storyline simply feels limp, with no real snap to any of the events or the final resolution. The episodes themselves are poorly laid out, as if the entire storyline was first animated as one long episode and then cut up afterward into 5 episode-sized chunks. Hell, one of the episodes ends with the someone asking the innocent question "So you know where we can find a stray cat?" then BAM, credits sequence. What? Are you kidding me?

All of these plotlines are well animated, at least - the animation remains pleasant to look at even during the times when the odd colour palette and, god forbid, shaky-cam, had me stabbing buttons on my TV remote in fear that it was dying. The principal cast remain on model at all times and everything on screen gets its fair share of care and detail, although at times you can see the sceptre of cost cutting creeping in whenever the characters spend multiple minutes at a time spouting exposition and the only thing that moves are their mouths. The soundtrack is a nice mixture of recycled motifs and tracks from the first series and some new items, but this can fall flat at times when the background music and the action presented are mismatched. These moments quickly pull you out of the show and leave you wondering why they chose that music track. On the topic of music, I detested the new opening and ending tracks for this series, which felt like severe downgrades from the much more listenable themes present in season 1.

Also on the topic of audio, I gave the dub a whirl for the majority of this set. On the whole it’s a passable offering, although I have to admit that the majority of the female cast where initially grating and took some getting used to. The voice actor for Kyon was enjoyable, especially for the inner monologue sections which I felt were very well done.

As a stand-alone series, and especially as a continuation of the first series, Haruhi Season 2 feels like a limp afterthought without anything to really commend it. New entrants to the franchise, especially, should steer well clear of this series, as it does not have anything to offer to them. Returning fans may enjoy some of the prodigious bonus content packed onto each of the discs, but it feels like scant consolation when the series itself has so many issues. If you really, absolutely must spend your money on something Haruhi-related, I would like to suggest picking up the novels, or perhaps a PVC figure of Yuki Nagato to put on your mantelpiece.

Extras include: Textless Opening and Ending, Season 1 Ending Sequence (labelled "Special Ending"), TV commericals for the series, Retail promotional videos, Additional promotional video, a set of location scouting shorts with the Kyoto Animation staff, an audio Prologue to Endless Eight and a behind the scenes promo of an Aya Hirano Music Video.

4
Comprised mainly of filler and lacklustre plotlines, even die-hard fans of the franchise will struggle to enjoy this series.
LATEST REVIEWS