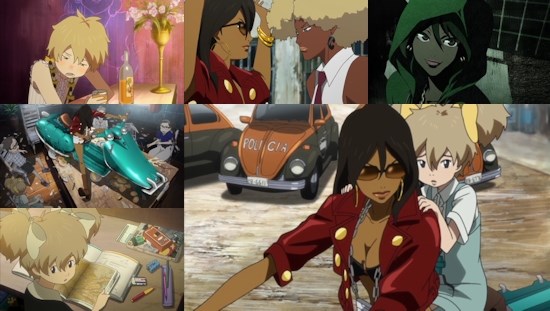 Michiko & Hatchin has always struck me as something of a hidden gem within the world of anime - it's a series that I've heard mentioned and recommended to me plenty of times, but in spite of the involvement of Shinichiro Watanabe (albeit as a producer rather than director) it's never enjoyed the same kind of popularity as other works to which his name is attached, and in spite of no shortage of critical plaudits it has neither become a "big deal" nor enjoyed a UK release. At least the latter travesty has now been resolved thanks to MVM Entertainment, who see in the New Year by bringing us the series across two half-season sets on DVD.

Set in a fictional approximation of South America, the series takes two wildly different characters and throws them together on what can only be described as an epic road trip. This titular pairing are united in a most unusual fashion - Michiko is a dangerous escaped prisoner with a penchant for violence on the run from her would-be captors, while Hana is an unloved and abused adopted child kept on by her "father" only on account of the benefit money her existence brings him.

"So what links the two of them?" I hear you ask. Well, the entire reason for Michiko's escape from prison is that she's had a picture of her long-lost daughter dangled in front of her, and Hana seems to fit the bill of this girl to a tee. Thus, Michiko makes a spectacular entrance into Hana's home, snatches her away and drags her off on a journey to search for her father in spite of no shortage of evidence suggesting that he's long dead.

I'll be the first to admit that this all feels like a clumsy initial setup for a series - the first episode's brutal depiction of Hana's situation and the abuse meted out to her crosses the line into being sickening to watch, almost feeling at odds with how things play out from that point forward. Yet once the rubber hits the road and Michiko and Hana's journey begins it somehow works, with that aforementioned abuse allowing the aggressive and reckless Michiko to play the heroine even though she's really nothing of the sort and giving Hana (or Hatchin as she comes to be known out of a loathing of her actual name) ample opportunity to develop as a character in her own right.

From here, it's easy to make comparisons to the likes of Cowboy Bebop or Samurai Champloo - while there's a storyline running throughout the series that is constantly shifting and progressing, it largely serves as a vehicle to keep its main characters on the move and running into a variety of situations which will either test or grow their characters individually, or shift Michiko and Hana's relationship as a pair, be it for good or bad. It's these standalone tales within that wider narrative that really stand out as the highlights of this first half of the series - from Michiko finding herself embroiled in a love affair to Hana's attempts to work and make an honest living, you simply can't help but warm to both of the show's main characters as well as a number of additional members of the cast who come to the fore as part of their particular stories.

These stories are helped ably by the wonderful sense of place that Michiko & Hatchin exhibits - its South American location is unusual as a setting for an anime series, but works beautifully in terms of both the show's eye-catching visuals and also is excellent soundtrack (Shinichiro Watanabe is, of course, the music producer for the series, so that probably goes without saying). In comparative terms, I'd probably equate the world of Michiko & Hatchin to that of Black Lagoon - it's a harsh world of poverty and an often violent struggle for survival that pushes all and sundry into a criminal existence on the fringes of society, yet there is an incredible undercurrent of human warmth beneath these tawdry lives that can be truly touching. The episodes on show here have a wonderful eye for drilling into the minutiae of characters that would be nothing more than window dressing in other series - be they strippers or street urchins - and bring them to life in a riot of colour and humanity.

The larger than life treatment of most of its cast also allows the series to play fast and loose with both characters and scenarios and get away with it - for all of her wonderfully-realised childish sulks and tantrums Hana is unbelievably verbose and intelligent for a nine year-old, but in a world where children are taken as slaves and transported in a hot air balloon or one can stumble into the midst of a bull fight without a second thought such concerns about realism can be waved away in the name of pure entertainment.

Ironically, all of the texture and vibrant stories available to the series and its world actually means that the main, over-arching storyline of Michiko & Hatchin is its weakest element from a narrative perspective, although some of the show's standalone stories do suffer from pacing issues, feeling rushed in places and disjointed in others when perhaps more time could have been afforded them to avoid such problems. Thankfully, that main story is still interesting enough to work in its own right, and none of those narrative issues break any of the stories entirely, so the overall experience is still very much an enjoyable one.

Compared to its strong Japanese language track, the show's English dub feels disappointingly lacking in passion - its audio mix as a whole is flat, but even beyond this the English voice cast feel like they're phoning it in despite having such entertaining characters to work with much of the time. Luckily, the subtitle track for this release is practically impeccable, so there's no barrier to watching the series in its original form for this DVD release. While we're on the subject of release format, this first half of Michiko & Hatchin looks passable on DVD and doesn't ruin the viewing experience by any measure, although we can only imagine that some of its fast-moving action scenes and more colourful locations would have looked more striking given a High Definition transfer. Still, overall this is a rock solid release that gives us no cause for complaint whatsoever.

Given that I knew little about Michiko & Hatchin aside from glowing praise from friends and the like before I started watching, I have to confess that I was worried that the first half of the show wouldn't live up to its hype - it certainly starts out awkwardly, and for the first few episodes it almost seemed like it was trying too hard to impress. However, given time I quickly realised that I'd fallen in love with both of the main characters and the show's setting without even knowing it, and a few episodes in I couldn't hit the skip button on the remote fast enough to start the next episode.

The fact that I'd recommend this first half of Michiko & Hatchin to anyone who has enjoyed Cowboy Bebop and Samurai Champloo really speaks volumes for this show's quality - there aren't many series that can claim to sit comfortably in such company, yet this show manages it in terms of both tone and content without ever really appearing to be out of its depth. If its second half can build further upon these strengths, then we may be looking at an early contender for one of the best UK releases of 2015.

8
A series packed with fantastic characters and exhibiting a wonderful sense of place, Michiko & Hatchin's varied character-driven stories at the heart of these episodes are a joy to behold.
LATEST REVIEWS