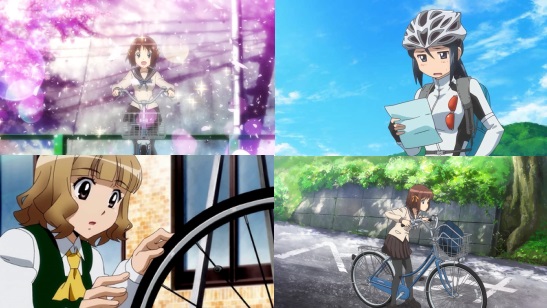 Boy, it sure feels like shows featuring girls cycling are a bit of a big fad all of a sudden doesn’t it? It almost makes you wonder if there’s some kind of public fitness campaign going on in Japan at the moment. At any rate, fresh from the excellent Long Riders (although we are admittedly still waiting on the last two delayed episodes), the genre is back again with Minami Kamakura High School Girls Cycling Club (which isn’t any less of a mouthful to say in the original Japanese) airing on Crunchyroll. Is it a victory lap of the genre or have the wheels fallen off already?

Hirome is about to start her new high school life at Minami Girls school in Kamakura and in order to commute to school she’s pulled her old bicycle out of storage. It’s a little problematic however as despite stating to her family that everyone remembers how to ride a bike, she has somehow forgotten. Fortunately another new student and a new teacher at the school are on hand, both with enough cycling knowledge to help her out. Shortly after the three set out on a whistle-stop biking tour of the area they meet up with two more new students and decide to form a cycling club within the school in order to revive the once popular club of which the school's principal was a former member.

To get the comparison out of the way – no this is not anywhere near as good as Long Riders, But it does have to be said that Minami Kamakura High School Girls Cycling Club is going for something a little different. Whereas Long Riders ditched pretty much the entirety of the standard "after-school club" format and took a much more focused look on the actual hobby of cycling, Minami is very much a club show and spends most of its first three episodes laying all the groundwork for its format. All four of the girls are set up with the pretty traditional composition of the pretty dumb one, the smart one, the rich one and the sporty one (that's not how I remember the Spice Girls line-up - Ed.). Their teacher is already making herself ‘one of the girls’ and they’ve been given an amazing club room where they’re going to be able to do whatever they want. At present though it does work and there’s certainly nothing that falls flat thus far. The gang are all likeable and the show is wise enough not to go too far into jokey territory, instead pivoting into more of a dramatic route which is nice.

Visually things are certainly accomplished enough and, having been to Kamakura where the series is set, I can confirm that the environments look appropriate for the area and it looks great. Again, not on a par with Long Riders' quality but it’s certainly in amongst the better shows of this season in that regard.

The main thing for this show is definitely going to be how things play out across the rest of the series. Thus far the girls have only just formed the club so depending on how much they focus on the girls having fun on their bikes as opposed to the inevitable school festival, pool and "everyone gets jobs to help one of them buy a bike" episodes. In any case, however things play out based on these first episodes Minami Kamakura High School Girls Cycling Club is definitely worth a watch for a fun, relaxing time.

7
This series is pacing itself well on the straight, ready for the long haul.
COMMENT AND DISCUSS
blog comments powered by Disqus