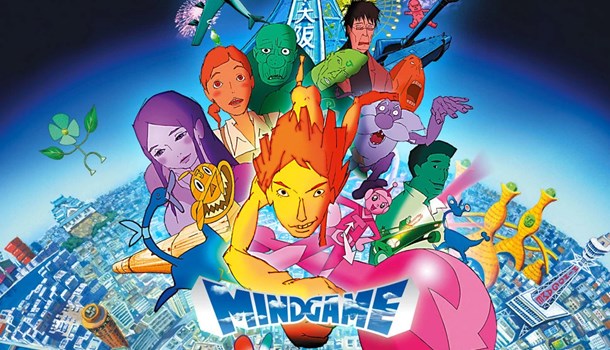 The film centres around three childhood friends, a 20 year old man named Nishi, his former classmate Myon and her older sister Yang. Later on in the third act a fourth major character joins the cast, an unnamed old recluse referred to simply as “Old Man”.

The story has three arcs. Myon is fleeing a pair of Yakuza who are chasing her father’s debts. Psychotic hitman Atsu is paired with a stoic senior gangster and they pursue Myon to the subway, where she runs into Nishi. The two were an item in school but broke up, though Nishi stills holds a torch for her. He contemplates confessing his feelings as he escorts her home, but wimps out filled with regret. They meet with Yang, her and Myon’s father and finally Myon’s fiance Ryo in their Yakitori shop. The gangsters appear. Atsu goes on a rampage, flooring Ryo, sexually assaulting Myon and finally murdering Nishi, before his senior finally puts a stop to his spree by killing him in return.

This first act has some of the most atmospheric setting in the film. The slow pace allows for the grizzly rain to run down the car windscreen as the gangsters keep watch for Myon and for the warmer family atmosphere to shine through in the shop. Atsu’s scene stealing performance is honestly hard to watch; not only are the acts extremely brutal, but Ken'ichi Chūjō delivers his lines with unpredictability and menace.

You might think the protagonist’s death in the first few minutes of the film might be a problem for the plot but for the fact that Nishi’s soul enters the lobby to the afterlife. The film takes a sublime turn for the weird here (come on, it’s Yuasa!) where Nishi is shown his humiliating and miserable death from every scale and angle. He manages to meet God, a capricious and cruel shapeshifter who basically trolls Nishi to come back to life out of frustration. He reappears in his own body, moments before his death and turns the tables on his attacker.

This begins the second act and a major tonal shift. Nishi escapes with the elder gangster’s car and after a brief chat with the kingpin, here begins one of the best car chases I’ve ever seen. It is an absolute banger, packed with frenetic action and funny, silly surprises. The music kicks in to the foreground as the three make their mad escape.

The three are swallowed at the end of the chase sequence by an enormous whale, where they basically remain for the rest of the film. This is the third act and again has a different emphasis. They are rescued by the old man, who’s managed to build a comfortable if lonely life inside the giant creature’s mouth, collecting the things it swallows and fishing up the seafood that lives there.

The three youngsters make an initial escape attempt and fail. The old man has been trying to escape for thirty years and never made it. The three fall into despair, realising that they’re trapped. After a bit of introspection they make peace with their predicament. The environment of the whale is dark, so almost devoid of background and claustrophobic. With no antagonists and no escape, the characters only have each other to interact with. They get a lot of time to explore their interests and talk.

Elder sister Yang has the biggest transformation here, being dragged along for the ride so far. She’s always wanted to be an avant garde artist and uses her time inside the whale to stage elaborate, sexually charged performances. Myon and Nishi reconcile and progress their relationship, culminating in an experimental, hyperactive blowout of a love scene. Nishi works on his manga, his career aspiration. Myon recalls her early success at swimming and returns to practice. A major emotional theme of the film is dealing with your regrets and the dreams you put aside. There’s humour here too; the characters share a daydream featuring sci-fi exaggerations of themselves.

It all ends with the four characters escaping the whale in a motorised rowboat, after a final brief moment of reflection where Myon realises all that her sister had to endure during their childhood. The escape itself is a stark change from the previous 30 minutes, an overwhelming action scene to end all action scenes, peppered with flashbacks and character vignettes as the protagonists row, swim and run back towards the world.

The film is bookended and peppered throughout with flashbacks and forwards showing important character moments. It’s difficult on the first viewing to make sense of them, but much easier on a second viewing.

In terms of character design and animation, the later work this most resembles is Yuasa’s original short Kick Heart. This is undoubtedly the film where the director does his biggest variety of experiments, not just in little vignettes but with the film as a whole aiming for different visuals, emotional tone and soundscapes in the different acts of the film. Strange innovations are peppered throughout, including the use of live action faces mixed with the animation and the mixing of cartoony CG with hand drawn characters in a sort of magical realism story that Nishi shares with Myon.

There are the seeds of all of Yuasa’s later works in this film, so it’s a must-see for his fans. I’d recommend it on the strength of the opening and the car chase alone to a general audience. There’s no getting around the huge tonal disjoint between the acts of the film, you might find the second half tedious if you’re less interested in the quieter character development. All the Yuasa hallmarks are present including the skilful rapid fire flashbacks to round out characters, the use of sports (football this time) as a plot device and character vehicle.

Actually, thinking about it, maybe Masaaki Yuasa is the greatest sports anime director of all time and nobody has noticed?