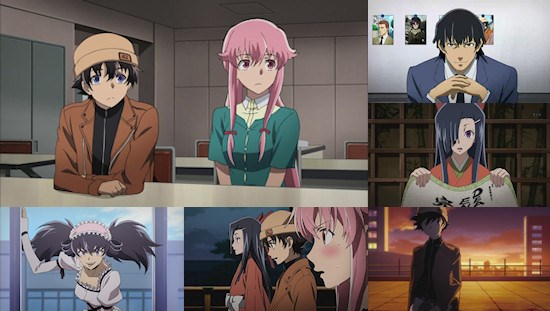 Mirai Nikki's protagonist, Yukiteru Amano, is a loner... but not just any old loner.  Rather, Yukiteru is a bit of a class A oddball of a loner, with a batch of strange imaginary friends with whom he spends his free time, and an obsessive compulsive habit of recording every minute detail of the world around him as he observes other people going about their business.

All of this sounds (and probably is) rather dull when viewed beyond the confines of Yukiteru's imagination, but what if his supposed imaginary friends were real?  Moreover, what if his primary make-believe buddy, a scheming mastermind named Deus ex Machina, brought one of his crazed games to the real world?

Welcome to the world of Mirai Nikki, where Yukiteru's idle dreams slowly turn into the stuff of nightmares.  Just like most of the best stories, the change which occurs in Yuukii's world initially proves to be a massive boon to our solitary hero, as he finds that the constantly updated diary in his mobile phone is now actually reporting future events before they occur - a scenario which suddenly makes school life a breeze whether it's acing tests or avoiding bullies.  However, as news of a serial killer begins to reverberate around the area, the darker side of Yukiteru's so-called "future diary" begins to come to light.  For starters, Yuukki soon discovers that he's on the killer's hit list, and what's more he isn't the only diary owner with a unique vision of the future, be it their own or that of others.

So begins Deus ex Machina's survival game, with twelve diary owners tasked with wiping out all of their opponents (either by killing them or destroying their diary) to become the new God of Time and Space - certainly a bigger prize than winning Strictly Come Dancing.

Once this basic premise of the series is laid out quickly, efficiently and occasionally chillingly in its first episode, there's only one word to describe the opening gambits of Mirai Nikki - insanity.  Everything about the series is unhinged and crazy, none more so than Yukiteru's unexpected partner in crime, stalker and full-on nutjob Yuno Gasai, who has no qualms about dishing out death and dismemberment upon anyone who threatens to get between her and her wishy-washy beloved.  Alongside these two characters we encounter other diary owners from a detective through to a pyromaniac criminal mastermind with an impressive ability to escape any given situation, a short-sighted cult leader and a self-righteous, Super Sentai hero obsessed individual.  The fact that these episodes probably only scratch the surface of the show's rival diary owners speaks volumes.

In keeping with these larger than life characters, everything about Mirai Nikki is big, bombastic and over-the-top - people die ten to the dozen, lots of things (and people) blow up, there are zombies, blood, severed limbs, rape, sex and a spare room filled with decomposing corpses.  If this all sounds a bit like the wet dream of a teenager whose been watching too many violent movies then you'd probably be right, but you shouldn't necessarily let that put you off.  The reason for this is that all of the ludicrous happenings on show here are backed up with some clever, well-thought out writing which makes each episode's twists and turns and the tactics of the various characters as they pertain to their own (and other's) Future Diaries as smart as they are compelling.  There's a delicious sense of malevolent enjoyment which runs throughout the series - nothing is off-limits and anything goes, ensuring that every episode is a rollercoaster viewing experience for the viewer.

This is backed up by the break-neck pace of these first four episodes - aside from a pause here and there there's little time to breathe, let alone think about what's happening on-screen, further serving to make the most of the constant salad of insanity Mirai Nikki serves up with such gusto.  Similarly, this series is hardly a visual tour de force, with simplistic yet mutedly colourful animation that is serviceable enough in depicting matters to not cause any issues.

From what we've seen so far, Mirai Nikki is far, far more entertaining than it probably should be - provided you can cope with Yukiteru's tearful whining about his lot (and even he mans up from time to time), here is a series that knows it's utter nonsense and revels in it by going all-out while ensuring that there's an intelligent underbelly to its madness.  If you've been yearning for a TV anime with that old-school ability to deliver blood, guts and (admittedly censored) boobs, but with a streak of genius that makes its plot that little bit more plausible, then you really should give Mirai Nikki a shot.  Just don't let it convince you that having a devoted, axe-wielding girlfriend is a good thing - it really isn't.

8
Everything about Mirai Nikki is over the top and ridiculous - but that's partly what makes it so incredibly fun to watch.
LATEST REVIEWS