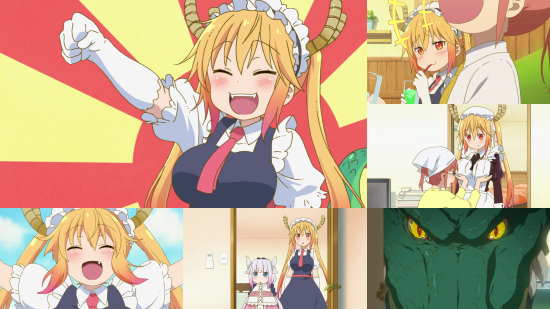 There was a time that I had thought that I was aware of all of the various monster girl manga series. Imagine my surprise when two series appear in a single season, neither of which I had read or had even heard of. I was aghast. I was inconsolable. I was determined that this should not continue. So, I am now on a manga purchasing rampage (when funds allow) to catch up on all the monstery-goodness and to actually enable me to find out if these series I am watching are anything like their paper counterparts.

The first series on this season’s roster is Miss Kobayashi’s Dragon Maid.

Yes, the main character’s last name is Kobayashi, and, thanks to an evening of copious drinking and scale groping (the exact details of this blessed night have yet to be revealed in the anime) she ends up with a smitten, centuries-old female dragon called Tohru as a companion at her home... who just happens to become her maid. I know this sounds preposterous, and I am hearing calls from my subconscious which says “How the hell can a dragon live in a typical (tiny) Japanese apartment?”. Ah ha. That is where the fun lies. As we discover in the opening scenes of the series dragons, beings of magic that they are, can transform and so Tohru, a huge green lumbering beast of a dragon probably weighing in excess of 40 tonned, turns into a cute and buxom fiery-red-headed (and red eyed) girl. You would normally never guess that she was a lumbering cave-dwelling beast bent on human destruction if not for the horns and the huge green tail, both of which she can materialise (and eat) at will. I hear dragon tail meat is quite tasty...

Tohru isn’t alone of course. She has other friends who come by to check up on her, most of them mythological beasts feared by the world. They are all powerful, dangerous, and quite amused by elements of human society, especially video games, school and of course, dodgeball. Four dragons playing dodgeball... you can imagine how that ends up.

“But how does no one notice dragons flying around, or all this strange stuff going on?” asks my bemused brain. It’s quite simple. Magic. Tohru and the other dragons can spin illusion magic which means that humans can’t see them when they are doing dragony things, like flying, being used as a vehicle to commute to work, eating cattle, destroying buildings, setting fire to things, having fights or just being dragons. Quexecotl has another unique trait, in that she can wipe memories and reset landscaping too, allowing her to basically get away with buxom murder.

Kobayashi herself is a character who, frankly, seems so oddly similar to my own personality it is rather scary. She is an overworked tom-boy computer programmer who is lazy, intelligent and occasionally social. She is also sarcastic with a nice caring but occasionally mean streak which I have fallen for a bit. Tohru on the other side is an overly excitable, slightly hyperactive and quite arrogant person - not exactly unexpected given her belief that dragons are a superior species. But her crush on Kobayashi and her caring nature towards Kanna is adorable and I am of the opinion that Tohru would make an excellent cat, if I wanted a 40 tonne fire breathing one.

Miss Kobayashi’s Dragon Maid, if you have not already established from the setting, is a situational slice of life comedy. It is essentially the story of this family coming together, getting through life, and how the dragons cope with their transition into human society. Thus far, it's up there with one of the most fun series I have seen in the last year. The writing has managed to turn almost every situation into a comedy, from the cooking of a roast dinner to the purchasing of food at the local shopping district. So far, every episode has brought a magnificent smile to my bearded face and given the current environment, I believe that a series that can make one guffaw so much deserves high praise indeed.

The character designs are as whimsical as you might expect given the subject matter, but I have found the series to be extremely well animated, with only a few flaws or shortcuts noted so far. The series uses an unusual mix of CG and traditional animation, with some of the establishing scenes being painted. It adds a nice feel to the series, however this hasn’t impacted on the character design. Tohru is, as you would expect, the most detailed character and I find myself quite drawn to the detail in her eyes and hair which are a wonderful contrast of oranges and reds.

That leads me to the acting which I have found to be similarly high quality and has greatly helped push along some of the quips. Kobayashi’s actress has by far won the contest for best in this series as her deadpan responses and subtle insults back at Tohru are sublime.

In a season where we have not one but two excellent series featuring monster girls (the other being Interviews with Monster Girls, which is similarly excellent and touching) it is hard to say which is best and I am sure that our Editor will happily fight me for it. Both series are very different, and while both are comedies in some ways and both are what I would describe as being uplifting series, in terms of pure laughter, Miss Kobayashi's Dragon Maid has won me over, but only just. I have found myself looking forward to each new episode, using Tohru’s and Kanna’s antics as a necessary anti-depressant for life. If you enjoy cute situational comedies with good acting and some fantastical quirks, then come take a ride!

You can watch Miss Kobayashi's Dragon Maid in streaming form on Crunchyroll.