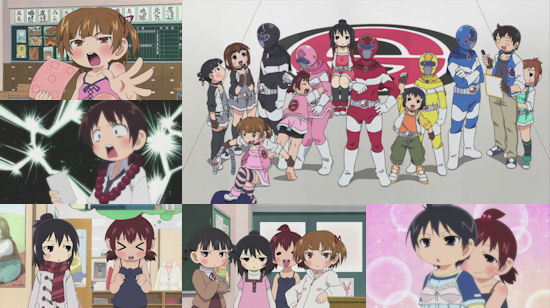 No matter what we think or say about a given series, the real proof in any anime's proverbial pudding is how many people watch it and how popular it proves to be.  Such is the case with Mitsudomoe, a series which didn't entirely convince us here at UK Anime during its first season, yet one which has nonetheless endured to produce a second series which is now simulcasting on Crunchyroll.

While the concept and focus of the show itself certainly hasn't changed in that relatively brief intermission between seasons, you'd be hard-pressed to believe this from this second season's opening episode, which ditches the Marui triplets almost entirely to instead have some fun at the expense of the apple of sister Hitoha's television-watching eye, the Gachi Rangers.  In essence, what this means is that episode one is a twenty minute long parody of Power Rangers and other "Super Sentai" shows of its ilk - and it's utterly, utterly hilarious.  With daft creatures that count as enemies, a nonsensical story and the brilliant incompetence of the Gachi Rangers themselves, this reviewer was crying with laughter by the half-way point of the episode and even a slightly less amusing second half to this opener did nothing to dampen my enthusiasm from one of the best parody episodes I've seen within anime in a long time.  Regardless of your thoughts of Mitsudomoe as a wider series, anyone who has ever watched Power Rangers would do well to check this single episode out.

After that brush with genius, Mitsudomoe returns to its more typical fare, following Hitoha, Mitsuba and Futaba in their daily lives that more often than not seem to involve panties and embarrassing misunderstandings amongst their middle school friends or their father.  Although this is very much a case of "as you were" for the show as far as subject matter is concerned, these first few episodes somehow show a slightly sharper vein of humour than their predecessor.  The one-liners are better, more frequent and more cutting while the setups which lead to all of these gags are now so ridiculous and implausible that it actually lessens the sometimes uncomfortable feeling that came from watching middle school kids talking about porn and panties.  Then again, I still probably shouldn't be laughing about jokes involving a teacher allegedly committing sex crimes in the middle of a school fire, but what can you do?

For many, Mitsudomoe will remain a series that is simply anathema to them - its sense of humour will isolate some, its middle school setting yet more.  However, if you enjoy the odd guilty laugh at things you probably shouldn't giggle at then Mitsudomoe is slowly but surely turning into a snappy comedy that has certainly learned the ropes when it comes to delivering its jokes compared to the far less impressive opening episodes of its first season.

Even if the general premise of this series isn't for you, do yourself a favour and watch episode one of this second season of Mitsudomoe - it's an impeccable slice of comic brilliance.  The rest of the series may not live up to those dizzy heights, but you can't fault it for trying.

7
Its first episode is excellent, the instalments that follow less so, but this is still Mitsudomoe at its funniest yet.
COMMENT AND DISCUSS
blog comments powered by Disqus