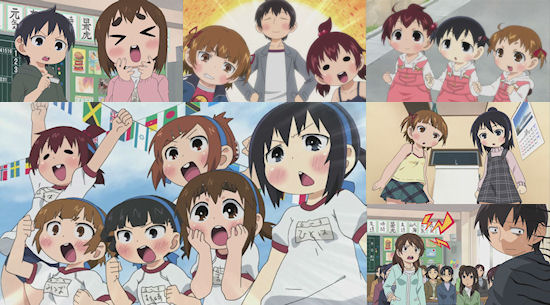 While remaining rather warily unimpressed by its first season, the opening few episodes of Mitsudomoe's second series felt somewhat like a coming of age for this manga adaptation, as though it had finally gotten to grips with its characters and allowed a vein of humour which grew from that understanding to take root.

With just eight episodes to play with this time around (not counting an additional bonus episode announced at the end of this run), it seemed as if Mitsudomoe was all set to make a deftly amusing dash to its finishing line based upon that new-found confidence - which is perhaps why these remaining episodes feel ever so slightly disappointing despite delivering some razor-sharp slices of humour.

The main issue here is one of repetition, giving entire sketches a "seen it all before" feeling as we re-enter territory that has already been traversed by the series such as a school sports day or having a character (or characters in this case) dress up as Santa in an attempt to fool a younger sibling.  This issue also rears its head in terms of individual characters - you can only hear so many "Mitsuba is a fat pig" jokes before it begins to feel old, even if this is offset by some carefully constructed sketches that make glorious use of that exact same joke at its core.

In essence, this is the duality of Mitsudomoe at work - sometimes its reliance on the well-worn tropes of its characters slipstreams perfectly into a sketch for maximum comic effect, yet at others it leaves you to roll your eyes and sigh at the predictability of it all.  To this end, Mitsudomoe's second season still feels like it has a higher hit ratio of good gags to bad ones than its earlier efforts, and it finds itself less reliant on gross-out humour to get its laughs (making those moments all the more effective into the bargain), but it still has the feel of a comedy anime that could have done so much more with its characters and their various situations.

Still, ignoring postulations as to its potential, Mitsudomoe ends up being very much a case of "mission accomplished" at the end of most of these final episodes - it makes you giggle a few times, laugh out loud a couple more, and then tops the whole thing off with the occasional spluttering guilty exclamation where you know you really shouldn't find the gag in question funny but simply can't help yourself.  That isn't really enough to add Mitsudomoe to the ranks of memorable anime comedy series, but it does make for a fun distraction that can become an oddly addictive part of your anime-watching diet, even if it does come at the risk of someone peering your shoulder and asking that dreaded question of "what on Earth are you watching?!".

7
It's as hit-and-miss as ever, but Mitsudomoe's final episodes bring enough comedy to the yard to be a worthwhile watch.
COMMENT AND DISCUSS
blog comments powered by Disqus