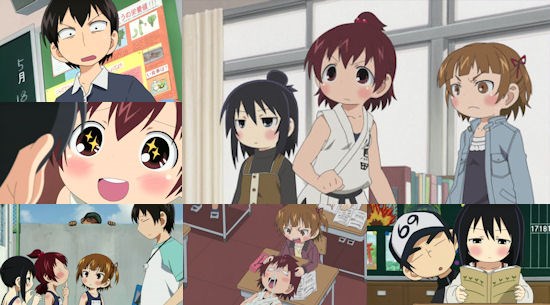 Good comedy is hard to find at times, be it in the realms of anime or otherwise, but this summer season sees Crunchyroll have a crack at tickling our funny bones via its latest streaming acquisition Mitsudomoe, a slice of life adaptation from an on-going manga series picked up by the Bridge animation studio and with a rather snappy title which plays on the similarly named Japanese symbol which represents man, earth and sky.

Similarly, Mitsudomoe is the story of its very own trio of unique elements in the form of the Marui triplets, three sisters with wildly varying personalities.  We meet this terrible triumvirate via new teacher Satoshi Yabe, whose first assignment quickly enters the realms of nightmares as he is tasked with the class containing all three of the Marui triplets, allowing us to learn about the personalities of all three girls.  Thus we have the bossy, confident and rather sadistic eldest sister Mitsuba, the ridiculously strong and decidedly perverted middle sister Futaba, and the quiet yet not to be under-estimated bookworm that is the youngest of the triplets Hitoha.  Throw in a beautiful yet ditzy school nurse as a love interest for Yabe, and you have a series that sounds on the surface remarkably like the recent Hanamaru Kindergarten, but a show that ultimate proves to be very, very different.

Rather than focusing on any kind of flowing storyline, Mitsudomoe instead effectively splits itself into three sketches per episode, with the sketches within an episode occasionally tied together with a central theme of some sort.  Thus, one episode sees us bear witness to a number of misunderstandings with comical consequences, while another spends much of its time focusing on bodily fluids.

Yes, that's right, Mitsudomoe is not one to shy away from toilet humour, underwear and body parts as a mainstay of its comic staple, bringing us around fifteen solid minutes in one episode of jokes based around snot followed by a gaggle of gags about urine samples.  Breasts, nipples, underwear and being kicked in the crotch also enjoy some time as the centrepiece of sketches, which should be more than enough information to allow you to extrapolate where the comic bar has been set for this particular series.

While the subject matter in itself is going to either leave you cold or rolling on the floor in hysterics, unfortunately Mitsudomoe has a more serious problem which tends to hole it beneath the water when it comes to getting laughs, and that's the way it handles its jokes.  Put simply, Mitsudomoe has a terrible habit of taking a joke, flogging it until its dead and buried, and then carrying on for another five minutes anyway just to be on the safe side.  This tendency to rely too heavily on what is effectively a single joke soon renders even what could have been genuinely funny moments so that they're met with a stony-faced look from the viewer as they're beaten around the head with that same gag over and over; even four episodes in, we've even seen occasions where effectively the same joke is used in later episodes, which proves tiring in the extreme.

If you're a fan of crude toilet humour and the like (and there's nothing wrong with that), then Mitsudomoe will probably offer up a few laughs for you, but make no mistake about it - This is no South Park or Team America, and it shows.  It's a shame really, as this series has the potential to be a genuine hit within its particular field, but its clumsy and laboured handling of its subject matter and sketches coupled with the fact that none of its characters are particularly interesting means that it misses the mark far more often than it hits the target.  For anyone looking to write comedy, there are plenty of basic lessons on show here about how not to do it.

5
Fans of toilet humour and the like will find some enjoyment from this series, but even they will tire of Mitsudomoe's overly repetitive nature.
LATEST REVIEWS