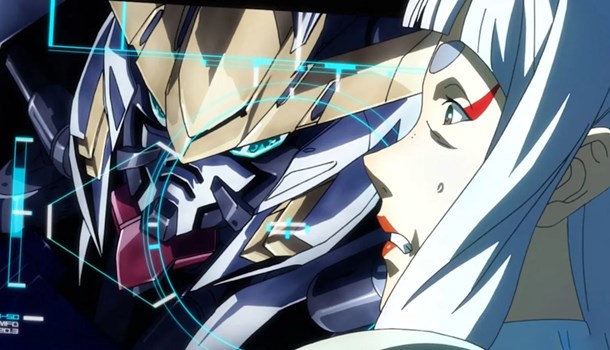 The 2015 Iron Blooded Orphans series shifted the action to a new stage - Mars is a sub-colony of the Earth following the Clamity War of 300 years prior. Held under the iron grip of the Earth government and it's ruling elite, Gjallahorn, the colony suffers abject poverty and rationing. Residing on Mars are a group of children inder the control of the CGS company, a military unit training children as fodder for paid mercenary work. Treated with brutality by adults that should be protecting them, it isn't long before the children revolt, take over the company and find their own work - escorting the idealistic Kudelia Aina Burnstein to Earth in a bid to improve the life of those on Mars by negotiating with the Earth government.

The two key players in the CGS, renamed Tekkadan by the children, are Orga Itsuka, leader and older-brother figure, and Mikazuki Augus, the emotionless young pilot of the one ace the company has up its sleeve: the Barbatos Gundam.

Once again, a Gundam series becomes a fight across the stars to reach Earth, so the series will need some serious character of its own to stand out from the crowd.

Certainly the effect of war on Children is a major factor here, though I have to say the average aga of your heroic Gundam pilot is only a few years older than Mikazuki. The real tragedy of these youths is the horrific implants they've been given to their spines to better interface with machinery. It's chilling if you think about it.

The ensemble cast is well thought out, with key members of Tekkadan given space to breathe and establish their own personalities beyond the main two characters. The most notable are the friendly and reliable Biscuit, and the muscular Akihiro, who has a striking resemblance to Berserk's Guts. The interplay between the child soldiers is a crucial to showcasing the brutality of war in impressionable young minds and establishing itself as something new.

Gjallahorn is also well considered, with powerful families working behind the scenes to control the Earth government. The three main characters are also nicely rounded - McGillis clearly has his own agenda, Gaeleo has noble intentions (and is the brother of McGillis' child-bride-to-be) and Carta is an officious and overly proud noblewoman who wears her heritage as a badge of honour. The interplay between these three childhood friends is as engaging as it is heartbreaking, giving us a sympathetic but ultimatley flawed trio of opposition.

Similarly the fighting is stripped back to basics, with the mobile suits using ballistic weaponry and blades/clubs to fight with leaden bangs and thuds throughout the show. Beam sabers and lasers aren't used in the show, and this gives it a far more grounded feel to the fighting.

Series one is very well paced, giving us belivable political manouvering on all sides, strategic and exciting battles and tragedy abounds as the ffects of war take their toll.

The animation is also excellent throughout, with striking direction courtesy of Tatsuyuki Nagai (Anohana). There are some beautiful touches to the animation, in particular one scene showing the light fading from a dying character's eyes was a subtle but distinctive little touch that I can't recall seeing elsewhere.

The one aspect that did strike me as a bit out of place was space pimp Naze Turbine and his harem of nubile space babes. While the idea of a harem doesn't give me an issue in and of itself - after all given the prevalance of family themes throughout the show, this is just another example of familial organisation - it did seem oddly comical in an otherwise grim show. Still, take your humour where you can get it with this show (and I have a feeling season 2 will pull a Gundam 00 and thin the crowd somewhat).

All in, I greatly enjoyed the show. From the brutal combat to the serious underlying themes, Iron Blooded Orphans is different enough from other Gundam fare to stand on its own merits. I'm both excited for, and dreading, the next season, as I hear the body count is pretty brutal, and I've never been a fan of depressing anime. Time to brace myself and head back into the conflict...

9
An often brutal tale with visceral combat and disturbing underlying themes, it stands on its own merits despite the lengthy Gundam lineage. For Tekkadan!