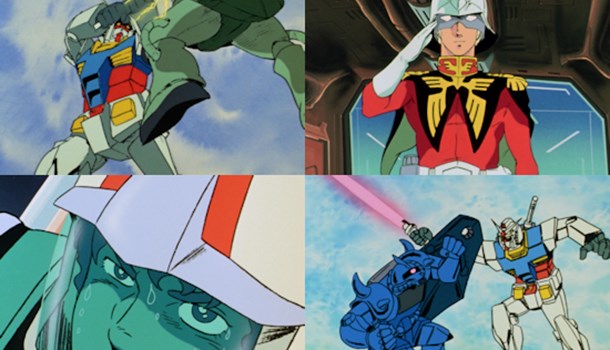 I'm sure you don't need me to tell you quite how important the Mobile Suit Gundam franchise is within the history of anime. Indeed, it's at least partially that very importance that has made dipping a toe into the world of Gundam so daunting for me - a toe that I finally chose to risk thanks to the western release of Mobile Suit Gundam: The Origin as it offered up a story prior to that of even the original TV series, before moving on to marvel at last year's Mobile Suit Gundam Thunderbolt: December Sky. Even after all of this, the prospect of diving headlong into over 40 episodes of a late 1970s TV show was simply too much for me - thank goodness then for Anime Limited and their release of the three-film Mobile Suit Gundam compilation trilogy on Blu-ray to offer me a gateway into the Universal Century that wouldn't eat up umpteen hours of my time.

Even if you've never seen a lick of Gundam before, chances are you'll know some of the basics from cultural osmosis alone - fifty years after man ventured to move into space, things have gone decidedly awry, and by year 0079 of the so-called Universal Century war has broken out, with the Principality of Zeon declaring independence from the Earth Federation. The resulting conflict has left the population decimated and humanity's prized space colonies in various states of ruin, with the war itself showing no signs of abating.

With that preamble out of the way, we find ourselves dropped into one of those colonies - known as Side 7 - as a warship arrives to pick up the Federation's new weapon, a humanoid Mobile Suit designed to negate and surpass Zeon's superior technology known as the titular Gundam. Unfortunately for those within the colony and aboard the warship - White Base - they've been tracked down by Zeon forces, who attack and indiscriminantly kill both soliders and civilians in the ensuing battle. In the midst of this chaos, a young man named Amuro Ray stumbles upon the Gundam - a creation of his own father - and becomes an unlikely hero as his actions help what remains of Side 7's poulace escape.

Thus the scene is set for a grandiose space opera unlike many of its ilk - rather than filling White Base with military heroes, it is instead scraping by through placing anyone who is the least bit capable within its ranks simply to fill required positions and stop the entire warship from grinding to a halt. This makes for a tense first film in particular, with every skirmish turning into a skin of your teeth affair as White Base's ragtag staff work as hard as they can to cope against the odds, bolstered only by the advanced weaponary at their disposal and the surprising talent of Amuro Ray, who himself is put through the wringer as a civilian boy unused to the pressures of armed conflict turned military pilot expected to despatch and kill anything which might be a threat.

Taken as a whole, Amuro's journey is a dizzying one - to the grand heights of a teenager enjoying the warm rush of success to one cowed by the horrors that he has witnessed and ultimately caused at his own hands. It's here where these compilation films occasionally struggle a little - there's no real time to dig into Amuro's psyche and show the slow, subtle changes which events have thrust upon him, and thus his actions can sometimes seem scizophrenic when divorced from their connective tissue, throwing him from the the thrill of victory to the depths of despair in thirty seconds flat. It never ruins the experience, but it does remind you that you're watching only selected slivers of a much broader story in this particular form.

Of course, Mobile Suit Gundam isn't just about Amuro's experiences, and one of the more impressive facets of the series is just how much work it does with its wider cast. The Federartion's nemesis, the so-called "Red Baron" Char Aznable, shows why he's become such an iconic character as he steals scene after scene with his enigmatic (and often pragmatic) charm, and watching him carry out his own agenda ruthlessly is fascinating in its own regard, while those operating around both Amuro and Char are given plenty of opportunities to grow and develop as individuals which they largely grab with both hands. This certainly isn't a series where life has been put on hold entirely in the advent of war, and interpersonal relations are handled as deftly as the grandiose battles which litter the series. Come the end of it all, you're left suitably invested in the entire cast to ensure that the impact of the third and final film is profound as various facets of the series reach crisis point and life or death decisions have to be made by many members of White Base's crew.

From this, it's easy to see why Mobile Suit Gundam's popularity has endured - its grandiose galaxy-wide politics are fascinating and well-realised, and they're also given more weight thanks to the equal focus on the trials and tribulations of the boots on the ground resulting from a war that has torn everything - and everyone - of value apart in some shape or form. This ability to juggle the macro and micro of its story really stands out across these three movies - compressing so much of what makes the series work effectively is an impressive feat, and the constant shifting between big, bombastic space battles and more introspective character-centric fare sits snugly within the framework of these films while only rarely faltering. Certainly, you aren't getting everything you might glean from the original TV series by watching these movies - that much is obvious - but taking these movies on their own merit it certainly doesn't feel like you're missing too much either.

Another advantage of these compilation films is that they allow the smoothing of some of the undoubtedly rough edges of the original work in terms of its animation quality. While the original Mobile Suit Gundam TV series has had more than a little fun poked at it over the years for its less visually coherent moments, these issues are never particularly apparent across these three films - certainly, you can say that its animation looks dated, but it never veers from that territory into looking outright bad, and this Blu-ray transfer brings across the colour, ambition and scope of the animation and design work with few of the negatives. Between this and the compelling nature of its story, it's likely you won't have much opporunity to sit and think about how its visuals have aged.

This is also true of the film's soundtrack - there's no English dub here, which is undoubtedly a shame, but the film does offer up both stereo and 5.1 Japanese presentations. We stuck with the 5.1 version here, audiophiles that we are, and it sounds tremendous and certainly adds an extra dimension to those all-important battles in the depths of space in particular. On that note, the subtitles themselves didn't give us any issues and did their job admirably across all three discs.

There's probably a whole lot more I could write about these films, but at some point it feels a bit like teaching your grandmother how to suck eggs (what does that even mean anyway?) - even if you've never seen it you probably instinctively know of Mobile Suit Gundam's positive qualities and why it's endured for so long in the mindset of fandom, so a few more compliments thrown its way by me will make little difference in that regard. What is more important then is to say that if, just like me, you're interested in finding a starting point into the Gundam universe but are unsure of where to begin, then this film trilogy could well be just the entry point that you need - it allows you to immerse yourself in the very start of this franchise, but in a way which is still readily accessible and easy to watch in 2017 without any of the caveats than might apply to its original TV iteration.

This trilogy also offers a fascinating insight into just how influential Mobile Suit Gundam has been in subsequent generations of anime - it doesn't take much to draw parallels between the series and another seminal show in the shape of Neon Genesis Evangelion, and I could sit and reel off plenty of other comparison points from Martian Successor Nadesico and far beyond with ease. Again, none of this is surprising and it's something most of you will be aware of on an academic level, but to actually see it play out before your own eyes is a valuable experience to my mind. Heck, even if you never watch another piece of Gundam material, I'd suggest you consider giving this one a go simply to allow you to fully appreciate it's place in the history of anime as a medium.

While hardcore Mobile Suit Gundam fans might insist that the full series is the only way to go, for my money this serves as a perfect entry point to the franchise that sidesteps many of the hurdles that might otherwise prevent you from giving it a shot. The only problem is, I have to find the time and money to follow-up on this trilogy and immerse myself deeper in the world of Gundam now these films have given me a taste for it...

Japanese stereo and 5.1 audio with English and French subtitles.

9
This film trilogy smoothes out the rough edges to provide the ideal way to immerse yourself in the seminal show that gave birth to the real robot genre.
LATEST REVIEWS