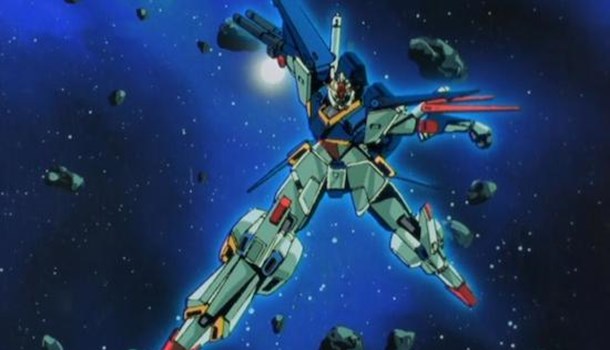 Do you remember the 80s? The neon riot of colour and passion, the music, the questionable style choices, the sense that everything was up for reinvention? It’s in this particular spirit that we find ourselves approaching Mobile Suit Gundam ZZ (or Double Zeta, as it’s more colloquially known) and its infamous opening theme ‘Anime Ja Nai’. If ever Gundam felt like it was trying to make a statement, it’s here - as the show wrestles with the arcane lore and military feel of its precursor series in an effort to reinvent itself for a younger, fresher audience.

From its early struggles to attract an audience, by the mid-to-late 80s, Gundam had become a household name, and the shift toward a more populist feel is plain from the start as we are introduced to a newer, younger cast of mostly original characters. Sure, old favourites like Captain Bright Noa are still bumbling around, but our viewpoint this time is through perky young lad Judau - who, refreshingly, couldn’t be further away from the usual Gundam protagonist mold of angsty teenager. Instead, we have a lackadaisical, generally optimistic fellow who just wants to get his kicks mucking about with super-powered machines in space, leading him to end up piloting the titular Double Zeta Gundam (which comes complete with spectacularly sleek, and often recycled, transformation animation sequence).

From the off, Double Zeta is infinitely more comical and lighter in feel than its predecessors. Characters rarely die, the violence is notably ‘soft’, and the first story arc revolves around a brilliantly goofy, lovestruck villain, who feels like a precursor to Pokemon’s Team Rocket. Indeed, much of Double Zeta’s rough-n-tumble feel comes on like a dry run for the kind of more elastic sense of playfulness that would run rife through anime in the 90s in series like Slayers, and while there are still space battles aplenty and enough mobile suits to have hardcore mecha fans grinning themselves silly, Double Zeta is careful to never let you forget this is a very *different* kind of Gundam.

Of course, the more cynical fan might decry Double Zeta as a ‘kids Gundam’, but - in many ways - seeing the show ease off its relentlessly pessimistic warlike bent to spend hours spinning its wheels through entertaining Saturday-morning cartoon style episodic adventures is in so many ways a breath of fresh air. Plots remain small-scale and locally confined, with character motivations clearly defined and the core cast kept relatable and even more crucially, likeable. Judau might be a joker, but he’s a joker we can get behind.

A note on the technical details - it is with Double Zeta that the Universal Century core Gundam series finally cast off Bandai’s efforts to dub the show into English (dating from a time when they seemed dead set on introducing the English-speaking world to Gundam in the ‘proper’ order), meaning we’re left with a sub-only presentation here. Thankfully, the Japanese cast matches the liveliness and candid humour of the show’s style, injecting endless energy into every episode.

We would advise viewers to be aware of the show’s first episode however, entitled “Prelude of ZZ” - largely a recap of the Gundam franchise so far. This episode was clearly reconstructed from sub-standard materials and as such can come as a shock to viewers expecting crystal clear Blu-Ray quality from the off. While the rest of the episodes present here are perfectly fine, this prelude is disastrously blurry, and rife with mid-80s efforts at CGI, which in their own quaint way, act as a kind of fascinating time capsule. Much like the show’s soundtrack, full of jazzy synth riffs and an Ending Theme that sounds like it could have come straight off a Culture Club album, Double Zeta remains the apotheosis of all things 80s to its very core, and for us at least, that lends it an almost irrepressible charm.

Japanese audio with either English or French subtitles. Extras include clean a Opening and Ending theme, plus two TV spots.

8
Gundam goes full-on 80s, and for the most part, it’s fantastic.
LATEST REVIEWS