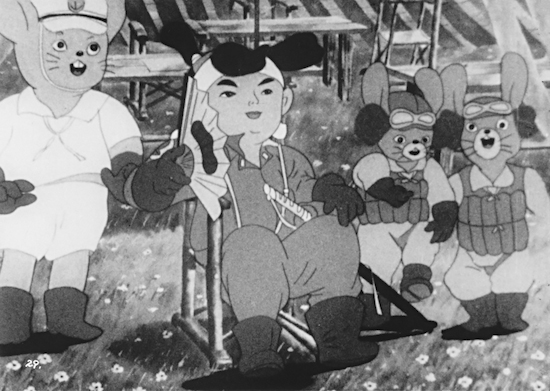 Ever since Anime Limited first announced their release of Momotaro, Sacred Sailors back in May 2016, it has achieved a kind of quasi-mythic quality - in many ways a kind of apotheosis of the company’s mission statement: to go where other distributors won’t, looking beyond out and out commercial smashes to release works of genuine artistic or historical value. Over the past year or so the film has been increasingly referenced online as part of a rapidly broadening critical awareness of anime’s history (for this, see also Jonathan Clements excellent Anime: A History). And now, finally, the release is hitting shelves, giving viewers everywhere the chance to see Japan’s earliest example of a feature-length anime.

Produced by Shochiku and director Mitsuyo Seo, at the bequest of the Japanese Naval Ministry, this 1945 effort sees a bunch of anthropomorphised critters go through military training, clear forests, and construct bases across Pacific islands. It’s all very much in the spirit of work hard, play hard, and is soundtracked by a succession of hummable children’s songs. While the opening scenes are more innocent in tone, the film gradually becomes more and more overt in its militarist messaging, as the animals eventually load up a squadron of planes with weaponry and launch a parachute attack on a British outpost.

Invariably boiling down to the simplistic description of ‘that WW2 propaganda film full of animals’, we’d argue that while the shock value of Momotaro’s politics is certainly eye-opening, it often takes a back-seat to the sheer richness of the immersive animation-work. While not quite as Disney-esque as other ‘early anime’ examples, such as Hakujaden (1958), there is a fluidity and elasticity to the animation quite apart from the still-centric limited animation that would develop in Japan from the 60s onward. At times, Momotaro dazzles in the outright degree of movement present in every frame, with a three-dimensional quality to certain scenes looking impressive even by today’s standards (something the attached 15-min short The Spider and the Tulip also boasts). That said, the movement - like a boat juddering through choppy seas - can also become weirdly queasy. Coupled with the character designs, watching Momotaro can at times feel like a bizarre, psychedelic fever dream, inhabited by a horrific panoply of elastic human/beast hybrids. Chief among these, long-nosed chimps - big lips splitting apart to reveal toothy rictus grins - and demented, googly-eyed elephants hauling lumber whilst they sing away in a deep baritone.

Whether it's the underlying darkness of the subject matter, the unfamiliarity of the rubbery animation style, or simply the film’s age, there’s something that jars whilst watching Momotaro - an easy watch, it is not. Fascinating, yes, but in a way that remains constantly unsettling. While its core appeal comes in its sheer ‘otherness’, a relic of a time almost completely lost to us, it is this otherness that also distances us - at times the film feels more like something made on another planet, something the soft black and white palette only serves to emphasise.

And thus, to the difficulty of recommending or rating this release. As a museum piece - which Momotaro surely is - its value is in many ways priceless. If - as Anime Ltd have remarked themselves in the past - even only a handful of libraries round the world purchase a copy for their shelves, allowing students and scholars of animation and Japanese history alike to study this fascinating cinematic record, then they have already succeeded. It is crucial that historically important works like this remain in print; in easy, legal access of those that need to study them - furthering the discourse of anime as a medium.

Yet, looking beyond Momotaro’s historic value, this is a film we are highly cautious in recommending to a more casual viewer. The animation work is stunning - even more so, given the film’s age - but when it comes to narrative and pacing, Momotaro feels every bit the antique, and very much requires you to be in the right headspace as a viewer to appreciate. Seen as one might approach a piece of fine art in a national gallery however, Anime Limited’s release is one that invites us to confront the past in new, intriguing ways. Callenging and surprising us in ways very few other pieces of anime can.

Japanese audio with English or French subtitles. Also includes the short film The Spider and the Tulip and a 128-page book "Sacred Sailors: The Life and Works of Seo Mitsuyo" written by Dr. Jonathan Clements.

8
An utterly vital work, albeit one whose appeal is chiefly limited to anime scholars.
COMMENT AND DISCUSS
blog comments powered by Disqus