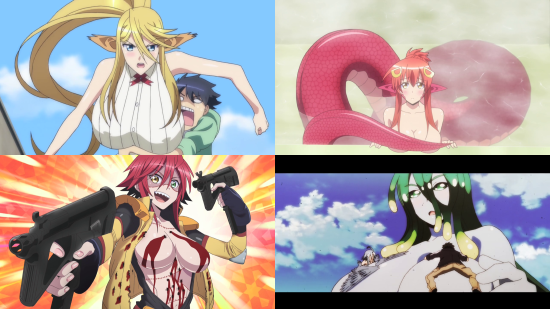 It is finally here!!! After waiting almost two years while it was translated, dubbed, etc. the complete collection is finally here, and boy am I happy! [We’d never have guessed… - Ed.] After such a long wait, it will be interesting to see how much my opinion has changed since the first time I laid witness to the scaly grandeur of Miia. If you want to remind yourself of my initial thoughts, please dive in, and then come back to hear more about why Monster Musume is the anime of the year! Though be aware, this review is going to be as long as it is entertaining…

I want to write about why Monster Musume is one of those series for which I class myself a “fan”. While I personally love many shows - I have collected merchandise and paraphernalia from over 20 series to date - Monster Musume is up there in my top five. So, if you’ll indulge me a while, I will deviate away from our usual review format [I don’t remember approving this… Should I be worried? - Ed.], and simply list the reasons why Monster Musume deserves such a lofty position on my list.

1. The universe is well thought out

Okayado, the manga’s author, has spent a great deal of time fleshing out the universe. Every monster species have their own histories, weaknesses, strengths and unique features. This comes across very strongly in the characters themselves. He has also created a world where the existence of monster species was kept secret for a long time, and only through a change in the Law are the species finally able to mix. This occurs on an exchange student like basis. It is all very diverse - if a little perverted - and quite nice. I rather like all of the different issues the girls face in their everyday life, this is especially obvious in the small snippets showing the everyday lives and activities of the main cast. Of particular interest to this reviewer are the specific cleansing rituals which are shown in the short OVAs.

2 - The character designs are superb

This is as a result of the original creator’s work, as Monster Musume was created from a series of his fan works, and with this came a huge variety of species. From kobolds to slimes, and from dryads to devils, Monster Musume is a veritable cornucopia of monster species. The fact that all of them are girls… is just a footnote. Though based on the source material there are males, they just tend to be a bit… different.

3 - The dialogue is hilarious

When you have such a diverse cast in romantic competition, there is bound to be some rather amusing banter. From Suu being referred to as a “sexy puddle”, to Doppel’s “itty bitty titty committee”, to terrible fish-related puns and quips poking fun at the harem genre in general. Monster Musume is definitely not something to be taken seriously. This is an out and out comedy, and the dialogue reinforces this the entire way through.

I am a fan of a good dub track. For me, if the actors have a great time, they are given freedom of expression, and if they can bring out the emotion of the characters, then that makes a good dub in my eyes. I personally think that the English dub of Monster Musume is cast perfectly, as the voices - especially Miia, Rachnera and Centorea - fit the characters perfectly, and the delivery is spot on throughout.

5 - The stories are ludicrous

The entire point of a slice of life series is to see the characters in their everyday lives. In normal series, that would be going to work, school, and dealing with issues that crop up. With monster girls, everyday tasks like going food shopping, or going for a walk in the forest, dealing with haters and having a cold all turn into life threatening situations.

6 - The series is pervy, but in the best possible way

Given that the show fits into the category of perverted harem (with some strange kinks), some lewdness is to be expected. In this instance, expect lots of naked nipples, swaying breasts, breast sucking, groping, rapid dehumidification through the use of slime, kissing, eyeball licking and of course, intimate views into the anatomy of various monster species. There are some scenes, especially those in the OVAs which are quite… illuminating.

7 - The series is full of obscure pop culture references

It would be hard to imagine how a series about monster girls might include a kaiju battle, with its own slimy Godzilla, but Monmusu manages it. Metal Gear Solid’s Snake works best when Snake is a lamia, and what better way to end the world than with a giant spirit bomb. I love the little references within the series as it’s a nice reminder, that those who make the series are just like us [speak for yourself! - Ed.], given the content.

8 - There isn’t an unlikeable character in the main cast

No, seriously. Each of the girls have their strengths and weaknesses, but they are all likeable and there isn’t actually a bad one among them. Miia has her moments of being obnoxious, and her jealousy can be irritating, but she is just really insecure and isn’t used to not being the centre of attention.

I have had long discussions about the male protagonists of harem series being - well - indecisive, and weak willed. Kimihito is one of the exceptions: While he doesn’t ‘choose’ one of the girls for his bride, he does turn out to love them equally and as the host family for the girls he cares for them exceptionally well. He is actually a decent bloke.

10 - The bluray is a significant upgrade from the streaming edition, and comes with many good extras

The words “complete” and “collector’s” get banded around a lot these days. In this sense however, complete means complete. Included on the DVD and Blu-ray sets are all twelve episodes, two OVA episodes and almost sixty small ‘webisodes’ showing scenes from their everyday life, and everything is fully dubbed. The main change from the streaming release is the addition of glorious nudity, there are nipples everywhere. What was once hidden by bright lights, is now jiggling for the entire world to see. This is true for both the DVD and the bluray, and it is a hell of an upgrade from the - still available stream on Crunchyroll - streaming version, plus you get the English dub as well.

I do have to stress this quite important point: Regardless of my highly biased opinions, Monster Musume is not for everyone. It is important to remember that I adore perverted series. I love series which don’t take themselves seriously and I absolutely love monster and animal girls. I also have the advantage of living alone… If you don’t fancy enjoying the series in a darkened room, by yourself, I recommend watching it with a lot of gin, friends, and… WITH DRINKING GAMES (see below).

What you will get with Monster Musume – Everyday life with Monster Girls, are laughs, smiles and over six hours of everyday antics, with beautiful girls who just happen to be monsters.

Now, it would be easy to drink every time a nip slip, or a breast appears. In fact, this happens so frequently, I’d imagine that if you were drinking each time this happens within the first three episodes, well, any normal human being (but probably not a monster) would be taking a trip to A&E! Instead, the target of our drinking is Suu. Now, Suu is a slime. She gets dehydrated easily. When she is dehydrated she seeks the nearest source of water, be it a tap, a pond, a bead of sweat or moisture on clothes...

When Suu takes a drink. So do you.

If you make it past episode 12, good luck!

9
Will you let these beautiful girls into your heart?