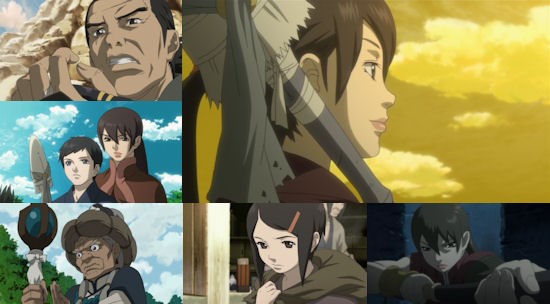 When a series is produced by Production I.G. and directed by Kenji Kamiyama of Ghost in the Shell: Stand Alone Complex fame, chances are its worth sitting up and paying attention given the track record of this pairing whenever they've worked together.  It's this dynamic duo which have united to bring us this new release from MVM, Moribito: Guardian Of The Spirit - A release which is in itself of interest to UK anime fans by marking the end of MVM's reliance on single disc releases, meaning that part one of this particular show consists of a whopping thirteen episodes spread across its two discs.

The series itself is based upon the first of a series of fantasy novels penned by Nahoko Uehashi, and this anime adaptation wastes little time introducing us to its protagonist in this ancient Japanese setting; A female warrior named Balsa who instantly feels (and indeed looks) a little like a decidedly more human version of Ghost in the Shell's Motoko Kusanagi, a comparison which it's hard to shake once we see her in action at her spear-wielding best.  In fact, it's the need for repairs to Balsa's spear which brings her to the town of Yogo as this series begins, but any such repairs are soon postponed as a moment of instinctive bravery and compassion lead to a chain of events beyond anything even this hardened warrior turned bodyguard could have expected.

The reason for this is the subject of her dramatic rescue - A boy named Chagum who is a prince of Yogo's royal family.  After saving him from drowning after an accident, Balsa is eventually tracked down and invited to an audience with Yogo's queen, where it is revealed that this so-called accident was in fact anything but.  With belief within the royal family that Chagum is possessed by some kind of demon (an accusation which isn't entirely without merit, as it turns out), Chagum is set to be killed at any time, leading to the queen imploring Balsa to become his bodyguard.  Reluctantly she agrees, and so the wheels of the show's main storyline is set in motion.

Despite attempting to cover their tracks, the truth about Chagum's escape soon becomes known by the Mikado and his subordinates, turning the first disc of this opening half of Moribito into a cat and mouse chase between his forces and Balsa as she tries to protect Chagum from his fate.  It's here that we get a taste of how Moribito handles its action, employing lightning fast sword and spear-play that can be spectacular on occasion despite lacking in realism on account of its ridiculous pace.  As the series progresses, we also find ourselves introduced to a few supernatural elements, namely the existence of "magic weavers" who can communicate with spirits on the one hand and "star gazers" on the other, both of which prove to be more than just crazy kooks to bring a rather more spiritual tone to the proceedings.  While the introduction of magic and spirits in particular feels a little bolted on at this juncture, it looks likely to play a major part in the latter half of the series.

As we reach the second disc of this release, so the series takes a leap of faith of sorts, moving away from the action and tension of those initial episodes (via a twist in the tale that is rather implausible on a couple of levels unfortunately) to rest its focus instead on the lives of Balsa and, more importantly, Chagum as they come to terms with their new circumstances while still remaining acutely aware of the threat of their discovery by those who are out to kill the prince.  These episodes do succeed at times to create an entirely different sort of tension while also affording the series some simple but effective story-telling devices, but there's no denying that the energy of those early episodes has largely dissipated by this point even though attempts are made to inject some more action into proceedings.

Just as we might expect from any Production I.G. series, the production values on show throughout are high - There are occasional moments where the show's CGI looks a little incongruous, but overall the animation used does a superb job of bringing the world of Balsa et al to life.  The same can be said of the show's original dub, which is supplemented by a passable English dub which lacks the rich texture of the original voices.

Overall, this first half of Moribito exhibits many of the hallmarks of a very good anime - Characters that are likeable but with sufficient depth to be interesting and a solid story which has a lot of room to grow and shift as the series progresses.  That said, it does suffer from a couple of occasions where its story-telling drops into the realms of the unfeasible, while the second batch of episodes offered by this release see a definite drop in the pace of the series which might bore those who were entranced by its earlier episodes.  Look beyond that change in tone however, and we have a mature series that is happy to take its time and play the long game to tell its tale - An approach that could well pay dividends if the second half of Moribito is as good as it potential suggests.

English 5.1 and Japanese 2.0 audio with English subtitles.  With thirteen episodes crammed into this release, there's no room for any extras aside from a couple of trailers for other MVM titles.

7
A change in pace at the half-way mark of this volume will be jarring for some, but this is otherwise a promising and maturely delivered series so far.
LATEST REVIEWS