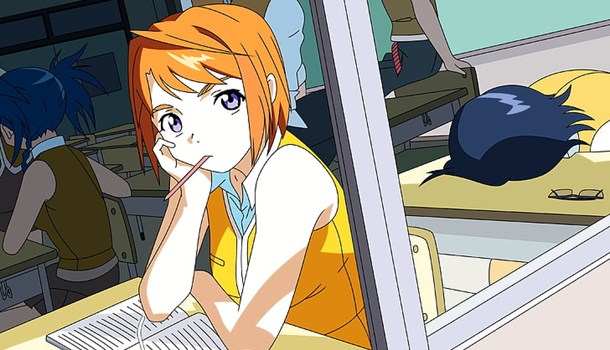 In the last review, I mentioned that My-HiME had yet to really hit it's stride, and so expectations were high for volume 2 (especially given how fellow Beez release Crest of the Stars had totally changed pace by volume 2). But whilst My-HiME's second volume does deliver shocks, we have to wait until the last episode of the disc to get them.

The opening episode is something of a slow burner, and deals with Mai getting to grips with her situation. Personally I found it a little hard going, but with the next episode, things get interesting as we learn that not all HiME use their powers for the benefit of mankind - a sultry redhead named Nao Yuuki is luring men to their doom, and she's taking Mai's dippy roommate Mikoto along for the ride. Nao is currently my favourite character, which probably means her chances of survival are probably slim to none ^^

The last two episodes are the real winners though, especially the episode entitled "Precious Thing". This episode finally finds Mai accepting her role as a HiME and her friend, Akane Higurashi, learning a very harsh lesson in responsibility.

I've grown to like My-HiME, despite my misgivings about some of the characters - I'm really not involved with them on an emotional level yet, but something about it makes me want to see more, especially given the shocking last episode, which proved that the series can punch as hard as Full Metal Alchemist when it really wants to.

The incidental music is used to great effect throughout this disc, and stands as one of the most haunting soundtracks I've heard in an anime to date, and whilst the animation is nothing special, the overall look and feel of the package is top-notch.

The usual opening and closing credits, some production sketches and a bevvy of trailers make up the Extras - nothing special, but nice to see them.

8
Certainly growing some teeth, but I don't think its peaked yet. More please.