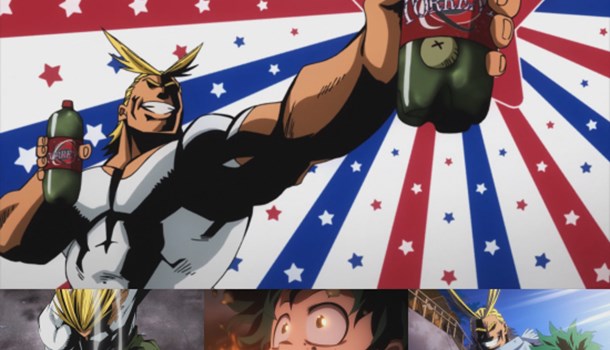 Above all else, Izuku Midoriya wasnts nothing else than to be a superhero. I mean, who wouldn't, especially when 80% of the population boast some kind of supernatural ability (or "quirk") that grants them unique powers? Unfortunately for Midoriya, he's one of that rare 20% of the populace in which no quirk has manifested - a living nightmare for a massive fanboy and admirer of the heroes that he sees protecting his own home city every day.

In fact, and in spite of all the evidence to the contrary, Midoriya still refuses to give up on his dream - scorned and scoffed at by his classmates and even his teacher, he still clings to the idea of attending U.A. Academy and becoming the kind of hero he looks up to. Even he knows that he's kidding himself, but that isn't enough to let the dream that burns deep within him die...

...and perhaps such potent dreams shouldn't be extinguished so easily? A chance meeting with his hero, the greatest living hero All Might no less, turns from excitement to disaster to opportunity as Midoriya of all people is left needing to remind both All Might and other heroes gathered of what it actually means to step in to save the day when nobody else is willing or able. Impressed by the important lesson that pans out before him, perhaps All Might is just the man to ensure that Midoriya can, in fact, achieve his dream and become a great hero in his own right.

Based on a popular Shonen Jump manga and with Studio BONES at the helm, My Hero Academia is the natural choice to become one of the spring's hit shows - so much so that Amazon and Funimation alledgely engaged in a bidding war to secure the simulcast rights to the title, the latter ultimately winning out on account of their ability to guarantee a home video release. It's easy to see why so much expectation is heaped upon the series as well - nobody reading this needs to be told that superhero stories remain big money-spinners in western popular culture right now, and anime is still looking for a big hit of its own to fit into a picture that My Hero Academia seems perfectly tailored for.

If you've read that source manga (available in English from Viz Media) the first thing you'll notice is that this anime adaptation of the series is certainly taking things slowly - the first episode concerns itself purely with setting up its world and protagonist, and by episode three's conclusion we're just about ready for the rubber to hit the road in terms of introducing the wider cast of the show and the inevitable high school setting properly.

The pacing of the show thus far is a bit of a double-edged sword, especially for someone with prior knowledge of the source material. Save for one slightly odd decision to reveal something about a major character earlier than is perhaps ideal, episode one's focus is arguably necessary but does feel somewhat glacial when there's so much promise just around the corner, while episode three is mostly just an elongated training montage. There are moments that justify this careful build-up though - the climax of episode two in particular offers a fantastic emotional pay-off that surpasses the manga thanks to how comprehensively Midoriya's desires had been constructed up to that point. Hopefully we'll see further similar pay-offs as we move forward, but I'd certainly like to see events zip forward a little more rapidly from this point forth.

Visually, My Hero Academia is everything you'd hope for from an A-grade Studio BONES production. The show knows when to leverage the kind of arresting and fluid animation at its disposal and when to reign things in, and the series so far has made full use of the great character designs and expressions of the source material as it implants the cast into a vibrant and colourful world that has been impeccably presented throughout. In short, this show looks great and does everything you'd expect of it, and its Japanese voice cast so far similarly slot into their roles perfectly.

If it sounds like I don't have as much to say about this series so far than you might have expected, then that probably tells you a little about this anime adaptation of My Hero Academia. There's nothing inherently wrong with its attention to detail and careful world and character building, but it doesn't leave much for us to get our teeth into from its first three episodes beyond some decent characters and an appealing presentation.

However, on the plus side the end of episode three takes us to the cusp of where things get interesting, and there's a lot to look forward to now that the setup is out of the way - expectations remain high, and the episodes to come will make or break the series. Our fingers remain crossed that this will be a hero of the spring season.

You can currently watch My Hero Academia in streaming form on FunimationNow.

7
A slow but steady start which shows glimpses of promise, and sets us up for what should be more exciting times ahead.
LATEST REVIEWS