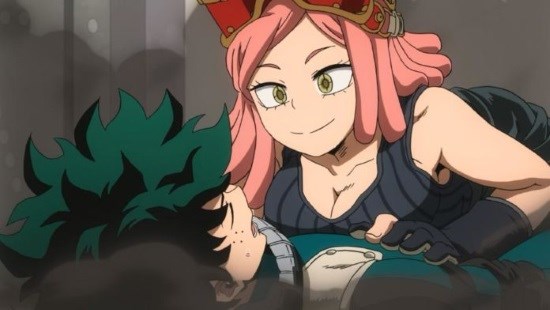 The newest arc of My Hero Academia begins in episode 52, in which our heroes -in-training are hard at work developing their own signature “Ultimate Moves” in preparation for their newest academic challenge: getting their provisional hero licenses. Its like getting your learner’s permit, except instead of letting them drive while their parents grip the dashboard in barely restrained terror, it allows them to use their quirks in public without getting arrested. Pretty important for becoming a hero, so the gang get hard to work studying and training their little hearts out to get ready.

Midoriya spends a good chunk of the time they have before the exam trying to figure out how to get around the fact that his quirk breaks his arms every time he uses it, making visits to the Support Class to reinforce his arms and prevent them from, like, exploding. It all culminates with the brilliant Deku, usually so creative and intelligent when it comes to using quirks, finally remembering that he has legs that can be used to kick. And thus his Shoot Style was born!

When Class 1A arrives at the testing grounds, they are greeted by students from across the country also taking the exam, which entails an elaborate game of tag involving balls (insert inuendo here - Ed). Only one percent of the 1500+ students will pass on the day, causing a moment of panic. All this is explained by a sleep deprived examiner who peppers his instructions with lamentations that the coffee just doesn’t give him the kick he needs it to, proving that his quirk is to embody how I feel at any given moment.

As the starting bell sounds, most of Class 1A sticks together to help each other get through the onslaught and watch each other’s back, other than Todoroki (who claims he can’t use his powers in a group), Bakugo, (whose refusal to work in a team is getting predictable) and Kirashima (who follows Bakugo because of course he does). Everyone else takes direction from an increasingly confident Midoriya, stepping into the role of field general with ease.

The exam starts with the UA heroes on the defensive. We see an array of powers from the other students on display, used to great effect to break up the main cast’s formation and isolate them. Deku is quickly attacked by a female student from UA’s cross-country rival school, Shiketsu High in an unsettling display of agility and stealth. He manages to wriggle free, rescue Uraraka, discover that it wasn’t Uraraka (the melting skin was a dead giveaway) and escape for reals as the imposter bounds away.

Across the three episodes, there are a few notable moments in there. Seeing All Might settling into being a real teacher is interesting. He goes to each student and gives them what guidance he can. There is a hint of regret to his voice as he must be saved by his protégé, lamenting that he is now the one who must be protected and rescued. This is also shown in the new opening animation with the hand of All Might pushing young Deku forward only to reveal Small Might standing behind him instead. I imagine this will become a theme later in the season, so I am glad that they are setting it up now.

Another standout is the introduction of Ms. Joke, whose power is to simply make people laugh. Like Robin Williams with less hair, she bursts in and immediately establishes a place in my heart with how quickly she transitions between serious conversations and outbursts of affection for the stoic Aizawa. What is most notable about this rather brief encounter, however, is the performance behind the character. As someone who dabbles in comedy, I recognise the skill on display here. The comedic timing from Amber Lee Connors (probably best known for shouting “Vacuum Butt Cannon” in Keijo!!!) is a textbook example of how dubs can be such a satisfying experience. The subbed scene loses a bit of that timing if you’re not fluent in Japanese and, as a result, is not quite the same level of hilarity.

As usual, the animation as the action picks up in the episode is a delight to watch. There is smooth motion and the fighting, though frantic and chaotic, is directed in a way that is easy to follow. The visual standout for me was Yoarashi, a new rival from Shiketsu High School, as he summoned a huge whirlwind vortex that helped him take out several dozen combatants in a few moments. The manic expression on his face coupled by the overwhelming power on display was both awe-inspiring and off-putting.

Looking forward, I’m enjoying speculating who is going to succeed in this latest test. Will Bakugo’s lone wolf act finally be his undoing? I think we’re going to see Kirashima sacrifice his chance at his license in order to help his friend succeed. I also expect Froppy, with her manoeuvrability and creative use of her tongue is going to get the drop on some poor fools who underestimate her. Iida also has a strong advantage in this speed-based challenge. Dude has jet engines on his legs, after all. And let’s not forget the mystery girl impersonating Uraraka during the exam. The cast may have no idea who she is, but with the way she spoke so obsessively about Deku and the way she moved as she left the scene, I have a rather powerful inkling.

Who else is going to pass? Its tough to tell. My Hero Academia has always been excellent at subverting tropes and going against expectations, so expect a number of surprises. All I do expect is a ramp up of speed and action. We’ve had long enough to come down from the All for One fight, so I’m looking forward to some more superpowered hijinks.

What was your highlight from these episodes? Who do you think will succeed and who will fail? Let us know in the forum!