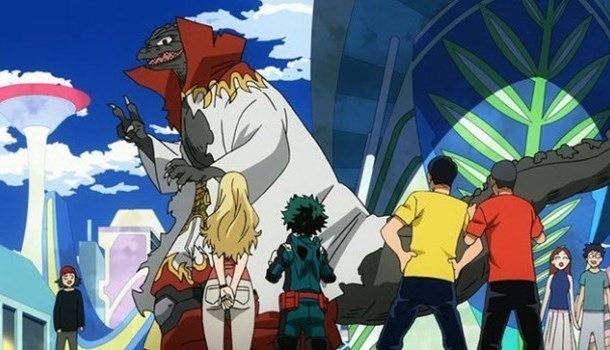 If there's one thing that Shounen Jump have mastered above all else it’s how to use formula in their productions. They are absolute masters of it and nowhere is that more evident than in their feature film productions. This year, the latest franchise to be run through the film formula is My Hero Academia with its feature film Two Heroes shown at Scotland Loves anime this year ahead of a wider theatrical run in December.

For those who aren’t familiar the formula is based on the fact that they won’t produce feature films that are part of the main plot of any given series; primarily because it would mean any anime already running would have to wait for the film and then have to assume everyone has seen it before it could carry on. The films are therefore almost exclusively original storylines set at a particular point within the anime but without ever actually influencing the ongoing story in any way. The formula basically goes thus: Big action scene to open, characters then find themselves in a new situation/environment they have to deal with, at least one person gets a new power/costume/macguffin that gets used a lot and then inevitably gets lost in the big climactic action sequence that wraps things up in a bow and sends our cast back off to the main story.

Here, our story finds the gang between the second and third seasons of the anime (though a prequel episode produced to set up the film confusingly sits right in the middle of season 3). All Might is heading off to I-island, a floating island home of the world’s brightest minds who spend their time cooking up amazing inventions, many of which become gadgets for the heroes. Because Midoriya has to get to the island somehow, All Might has taken him along as his plus one and once they arrive they quickly discover that the majority of the class have found various (not-at-all contrived) ways to end up there too.

Whilst All Might meets up with old friend David, Midoriya forms a friendship with his daughter, Melissa, whom whilst also being a bit of a prodigy herself, is also quirkless. Unfortunately the fun and games of the event is interrupted by a terrorist attack on the island which incapacitates all the adult heroes, leaving Midoriya and the gang to try and save the day.

Two Heroes is about as fluffy a fluff piece as you can get. That's not to say it’s bad: certainly it’s one of the better examples of these kind of films thanks largely to some neat little details occurring round the edges (watching invisible girl Hagakure having to use cards on sticks to play jan-ken is a particular favourite), but ultimately this very much follows the rote formula and you can pretty much sing along with the plot as it progresses. It’s a little bit of a shame as there are hints of a bigger story that could have been told within the confines of the film. Melissa in particular feels like a very under-used character whose path which lead her to overcoming her lack of a quirk through effort as opposed to the path that Midoriya took would have been a really strong character piece and it’s a shame she barely gets more screen time than the sex-crime waiting to happen that is Mineta…

Technically Bones have done just as good a job here as they did with the series so everything that was good there is good here and vice versa. Of the new content, I-island is a pretty neat environment with the nature of its existence as a place of technological marvels handily giving an excuse for the plot to have access to a whole range of otherwise unconnected ideas and environments to play around with. Melissa’s character design is great too, fitting in with the rest of the gang pretty seamlessly although nothing else in the series compares with the sight of Godzillo the kaiju hero stomping in for a brief cameo!

If you’re a big fan of the franchise then you’ll no doubt be on board for this as long as you don’t expect anything outside the box (and if you can’t find the time to see it then you haven’t missed anything). For anyone else, there's just about enough of an introduction to make sure you can follow along but the big action sequences will certainly keep you entertained for the film’s relatively brief run time.

6
A brief but solid fluff piece