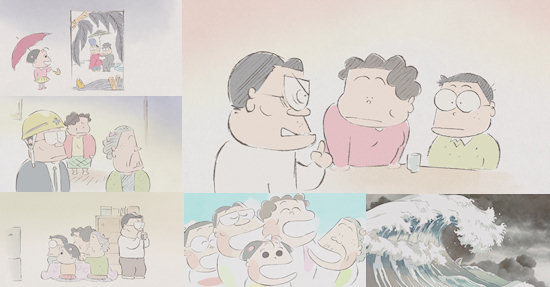 My Neighbours the Yamadas (Blu-Ray)

Ask most people to reel off a list of Studio Ghibli films, and chances are My Neighbours the Yamadas won't make that list nine times out of ten.  This isn't particularly surprising for a multitude of reasons - the film isn't directed by Miyazaki (with Isao Takahata of Grave of the Fireflies fame taking up the directorial reins), it doesn't sit within the studio's usual subject matter and its animation style is very, very different from any other Ghibli outing you're likely to come across.

Of course, "different" doesn't necessarily mean bad, and 1999's My Neighbours the Yamadas is notable if nothing else as the first Studio Ghibli movie to be created entirely digitally to make the most of the four-panel manga style and presentation used by the original source material upon which it is based.  The material in question is Nono-chan, Hisaichi Isgii's 1990s slice of life manga about a typical, slightly dysfunctional nuclear family, and as you might expect from its four-panel manga roots My Neighbours the Yamadas finds itself split into numerous sub-stories about the everyday "adventures" of the family in question.

Whereas the original manga filters everything through the view of the family's young daughter Nonoko, this theatrical outing takes a broader view of its surroundings as it follows various characters from the family across its numerous "sketches" - this more objective view gives us a far more entertaining outlook on family life as a whole, while also allowing the film to break out into flights of fancy from time to time as it uses particular monologues as an excuse to dive heavily into a sea of visual metaphors for whatever topic is being discussed.

It's during these metaphor-heavy sequences that My Neighbours the Yamadas gets a rare opportunity to stretch its legs - while much of the movie's animation is almost proud of its childlike simplicity, these moments prove that beneath those simple character designs and boxy surroundings is some accomplished, fluid and beautiful animation.  Outside of these scenes, the film's visuals are merely functional much of the time (albeit with a definite feeling of sheen and polish) and thus not as much of a feast on the eyes as previous Studio Ghibli Blu-Ray releases.  That said, this Blu-Ray transfer is as clean and crisp as you would expect of it, so we certainly have no complaints on that front.

This brings us to the actual entertainment value of the movie itself as it goes about its slightly whimsical but nonetheless rooted in reality turn of family-friendly comedy.  As we've come to expect from slice of life outings, the success of its comedy is both highly subjective and frequently scattershot, and My Neighbours the Yamadas is no different in this regard.  Its sedate pacing means that you're unlikely to be caught off-guard by something so hilarious it leaves you in hysterics, but nonetheless there are plenty of decent moments of observational comedy and commentary on family life which work regardless of your own cultural background - some of its sketches border on the daft and its characters are somewhat larger than life, but still remain sufficiently believable to work in their own right.

In contrast to all of the high school slice of life comedies you can find scattered around these days, it's actually something of a breath of fresh air to see a similarly framed comedy series tackle family life as a whole across various generations, and broadly speaking it works more often than it fails.  Its animation style is certainly an acquired taste, and it might well turn off those accustomed to Studio Ghibli's usual style before it even begins, but give it a chance and there's a warm-hearted and relatively entertaining movie underneath.  It's not one of the studio's classics, but as a departure from their norms it's a solid outing that offers more than curiosity value alone.

'Double Play Edition' includes the movie on both DVD and Blu-Ray - the Blu-Ray edition consists of English and Japanese 5.1 audio with English subtitles.  Extras for the release include:

7
It may have a very different style and content than most Studio Ghibli movies, but as sedate, family friendly comedies go this is a solid and amusing effort.
COMMENT AND DISCUSS
blog comments powered by Disqus