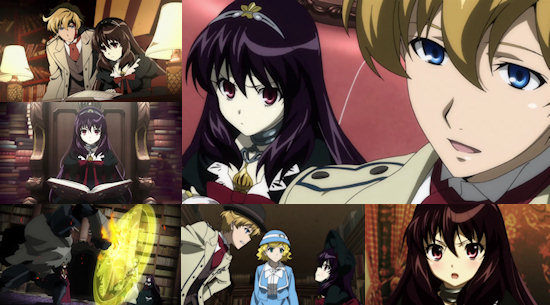 Mystic Archives of Dantalian, The - Eps. 1-3

The old adage about the only certainties in life being death and taxes is an unavoidable truth, and we all expect to have to say goodbye to our grandparents at some point in time - despite this however, most of us don't expect to hear of the murder of a grandparent, particularly when said individual seemed to lead an eccentric but otherwise sedentary lifestyle.

It's just this scenario that we're faced with as new streaming series The Mystic Archives of Dantalian begins, as we follow our protagonist - the well to-do Lord Hugh Anthony Disward - to the mansion of his deceased bibliophile grandfather as per a request within his will.  While Huey (as he likes to be known) is quite happy to take over the collection of books squirreled away by his grandfather at great expense, what he isn't expecting upon his first foray into the old house is to come across a young girl sat amongst the massed tomes in the basement.  Although he at first mistakes the girl in question as a doll, he soon learns that her name is Dalian, and that she too was listed in his grandfather's will as someone to be looked after by Huey.

Before he knows it, Huey is following in the footsteps of his relative - what dangerous footsteps they soon transpire to be too, as in no time at all he becomes drawn into the mystery of his grandfather's murder, and more importantly discovers the secrets of the library bestowed upon him.  In short, this is no ordinary library, but rather a collection of "Phantom Books" imbued with various supernatural powers.  It's these unique abilities (and the power held within one book in particular) which led to the burglary which in turn saw to the death of "Wes" (Huey's grandfather), and as Dalian and Huey set about trying to retrieve the book the only way to protect themselves from its lethal circus of contents is for the latter to become the "Keykeeper" of the former, in the process unlocking the powers of the library Dalian oversees that are held within.

After what proves to be a rather quick-fire opening instalment to set the tone and major components of the series out before the viewer, we very quickly settle into an episodic groove as Huey and Dalian come across numerous cases relating to Phantom Books, whether it's the mysterious chain of murders which follows an attractive young woman or a group of children with a new-found, terrifying intelligence.  The success of these stories are hit and miss, as episodic shows so often are - there are some suitably interesting twists and turns in episode two to keep things moving, but episode three tries to squeeze two stories into a single instalment and they both suffer hugely as a result on account of unsatisfying conclusions.

The most obvious starting point of any comparison with this series is to hold it up against Studio Bones' recent Gosick, to the point where The Mystic Archives of Dantalian look more than a little like "Gosick-lite" - it has a similar setting, tries the same trick of centring its story around the unlikely friendship of its two major characters, and then throws some more individuals into the mix to spice up this dynamic.  Unfortunately, in this light Dantalian really struggles to compete - Huey is a pretty blank slate of a character aside from some hints as to a longer-standing link to the show's mystical library, while Dalian is a dark-haired clone of Gosick's Victorique in many senses, only stripped of much of the latter's charm and pithy comments.  Although The Mystic Archives of Dantalian does differ from Gosick in that it focuses on the supernatural compared to the latter's reliance upon sleight of hand in the face of supposed miracles, it similarly can't boast the same level of intelligent writing as its forebear, frequently taking the most obvious route through any given story and occasionally (as with the aforementioned group of super-intelligent children) not really bothering to persevere with the story at all.

These problems are, by and large, almost certainly more of an issue with their source material than the treatment afforded it by GAINAX here, which shows a decent amount of visual polish and nice character designs offset by the slight feeling that some of its voice acting cast are phoning in their performances.  However, no matter where the blame lies we can't really escape the fact that The Mystic Archives of Dantalian is a pretty average and borderline sub-par effort that feels like it's riding on the coat-tails of successes elsewhere without any of the verve of the series it tries to ape.  To counter that negative viewpoint, there is room for improvement and growth from the series, but without much charm to be found from its characters or setting at this juncture I wouldn't want to bet the library upon it.

You can currently watch The Mystic Archives of Dantalian in streaming form via Anime on Demand.

5
Some nice ideas don't do much to disguise what is a rather lifeless and flat series so far, which misses the spark shown by other recent series which plough a similar furrow.
COMMENT AND DISCUSS
blog comments powered by Disqus