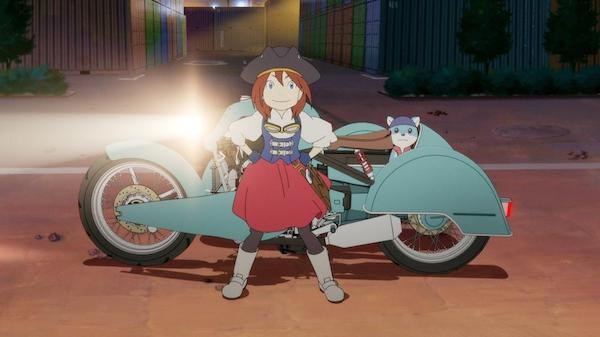 Perhaps best known (at least here at UK Anime Towers) for hard hitting and deep series like Ghost in the Shell: Stand Alone Complex and Eden of the East, Kenji Kamiyama is a name which conjures up certain expectations amongst fans of those series. Well, you can throw all those expectations out of the window because Napping Princess is nothing like either of them…

Napping Princess opens on a fantastical world of magic and machines, known as The Kingdom of Heartland. A kingdom ruled by a caring, but strict King, his young daughter Princess Ancien, and his overtly nefarious advisor - something blindingly obvious from the moment you first set eyes on him. Unless, of course, you are the King of Heartland. It soon transpires that the Princess is a sorceress and possesses the ability to bring the kingdom’s machines to life, by utilising her magical tablet computer. Yes, you read that correctly, it is essentially a magical iPad!

Alas, the Princess’ abilities cause something of a stir. The King disapproves and a giant monster known as the Colossus attacks the kingdom, seemingly prompted by Ancien’s use of magic. This results in Princess Ancien being locked in a tower, in true fairytale fashion, and her prized tablet being confiscated and locked in the palace vault. Meanwhile the King orders the construction of Engineheads, giant robots designed to fight the Colossus. That much of this tale is forced out in the form of narration by the Princess herself is the first of many structural issues with this film.

As Ancien is escaping with her tablet Kokone Morikawa wakes up in a small town in near-future Japan, as the preparations for the Tokyo 2020 Summer Olympics are in full swing. She lives there with her father, who looks remarkably like one of the workers in the Heartland factories… In-fact Heartland shares many characters and themes with the real world, and it turns out that Heartland is a bedtime story Kokone’s dad used to tell. He (Momotarō Morikawa) is somewhat standoffish towards his daughter, and is much happier communicating via text message than face to face and happier still playing Mahjong with his friends. Which appears to be something of a coping mechanism since the death of his wife, and Kokone’s mother, Ikumi.

Trouble surfaces in real life for the Morikawa family as Shijima Motors, and their moustache (well, beard) twirlingly evil executive Ichiro Watanabe (remind you of anyone?), accuse Momotarō of industrial espionage and attempt to have him arrested as well as take away his tablet (yes, it really isn't subtle is it...), which allegedly contains stolen code. With her dad arrested Kokone intervenes and finds herself on a road trip of sorts: on her dad’s motorbike and sidecar, with her childhood friend, the aforementioned tablet, and a stuffed animal named Joy.

Kokone is prone to falling asleep, anywhere and everywhere according to her friends, and she often dreams of the fantasy world. So, Heartland is all a dream, or is it? This is a question which will frustrate you more and more as the two worlds collide, and Kokone’s bedtime story merges with reality in ways which will often leave you scratching your head wondering what on Earth just happened. Really Napping Princess has two strongly linked stories to tell, but by combining the two in the way Kamiyama does he fumbles them both. Large chunks of each are left entirely unexplored leaving the viewer dazed and confused.

Animation wise the film has a nice aesthetic, especially the scenes in Heartland or where the two worlds collide. The character designs display some familiar quirks that viewers of Eden of the East will recognise, which certainly helps the character of the film. Speaking of characters, they’re a likeable bunch, with the obvious exception of the film’s villain. A character who - as our Catgirl Correspondent Seb pointed out in his review of the theatrical screening - seems to be an amalgamation of the 80s and 90s most overt bearded villains, a pinch of Hans Gruber, a dash of The Sheriff of Nottingham, a touch of Seb.

Napping Princess is a film which lives and dies by its story, and unfortunately it demands the viewer to not only suspend disbelief but to ignore logic, physics, and even sanity. The story hinges on the main character, Kokone, suffering from an almost narcoleptic napping problem, not only that but the bleeding of her dreamworld into reality isn’t in any way explained and leaves the viewer wondering if she isn’t just suffering some form of psychosis. It’s a shame as there are hints of a good story buried in there somewhere, a little more explanation would go a long way indeed. It’s as if the rest of the film either hadn’t been completed, or was left on a cutting room floor.

There’s still entertainment to be had here, but the full picture remains just out of reach and too much is left untold to be able to build a cohesive picture of the film's events. As it stands things happen in the real world, then poof magical things happen in Heartland and everything's resolved in reality without an ounce of explanation about what happened. This is especially frustrating for the run up to the film's finale which entirely glosses over Kokone meeting and confronting the heads of Shijima Motors, instead showing the viewer a giant robot battle in Heartland. While the events in Heartland are clearly supposed to be an allegory of the real world events, the result here is a confusing mess which ruins a potentially touching reunion.

All in all Napping Princess offers an interesting and imaginative premise, as well as likeable characters, fantastic vistas and nice character designs. Unfortunately it is marred by structural and pacing issues, from the opening monologue bogged down by forced exposition, to the messy and incomprehensible jumbling of the two worlds at the end - making it almost impossible to untangle the events which lead to the finale. Outside of those issues there is something good, perhaps even great, lurking in the shadows - there’s the definite promise of some of Kamiyama’s earlier work. However the film just doesn’t feel finished, it feels like there’s more to tell before the story can be considered complete.

Additionally the collector’s edition presented in a rigid case with a digipack to hold the Blu-ray and DVD discs. Also included is a 40 page booklet, an Art Card certifying the release number (limited to 1500 units).