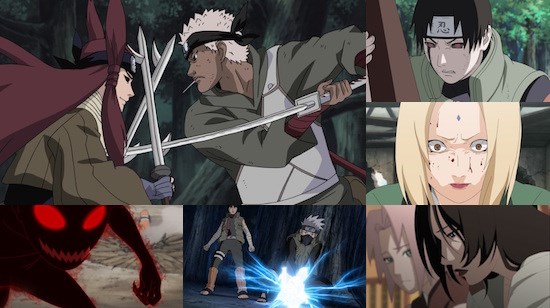 After a solid, if inconsistent, collection of episodes in Naruto Shippuden Box Set 22 we arrive hopefully at the shores of Box Set 23. Alas, the good ship Naruto has docked in filler bay and stays there right up until the very last episode of this set. So, filler is the order of the day, but don’t fret too much as some of it isn’t all that bad. That said, much of this collection can be politely described as pretty forgettable.

Naruto Shippuden Box Set 23 begins with Sai preparing his sealing jutsu and Kakashi’s teams tackling the various reincarnated members of the Seven Ninja Swordsmen of the Mist, though the set spends much of it’s first six epodes in the past. This includes an excursion into the Raikage’s past and his initial meetings with Tsunade; in fact flashbacks crop up with alarming regularity throughout the opening episodes of this set. Flashbacks are far from the only lazy narrative mechanism on display here, but they’re certainly the most prevalent.

It isn’t until the seventh episode that we’re treated to something a little different in the form of the “Power” arc: A special story arc to celebrate the series' 500th episode. While there must be a certain element of sadism in Studio Pierrot’s decision to celebrate a number artificially inflated with an obscene amount of terrible filler with more filler, in this case the filler itself is not actually that bad.

The “Power” arc covers a period after the Five Kage Summit but before the war begins, and sees a significant uptick in animation quality. Team Seven (Naruto, Sai, Sakura and Captain Yamato) are dispatched to “The Hole” to investigate a mysterious attack on the village which has left most of it’s inhabitants dead. The main threat here comes in the form of Kabuto, a character who I’ve often felt deserves more exploration, although there’s little in the way of fleshing out his character here. Eventually more familiar faces, good and bad, join the fray as well as a few new faces who surprisingly, for Naruto filler, aren’t entirely one-dimensional. We are introduced to former village guard Dokku, Shiseru who is a militia officer from a nearby village and the newly orphaned brother and sister Leo and Miina, to name but a few.

These episodes run into the same issues that most of the Naruto movies have, that being that they can’t effect the main story and are thus somewhat neutered, despite the fact that the writers have obviously tried to blend in the plot with current main story. Unfortunately I don’t think the writers were all that familiar with the story as they fail on a number of occasions, badly at times. They include some ninja resurrected by Kabuto, an ability of his which should not yet have been revealed to the Konoha ninja given where in the Naruto chronology these epodes sit. How can they be surprised by Kabuto’s resurrected ninja being used in the war when they have already come across his ability here? Thus far only Orochimaru is known by our heroes to have used the Summoning: Impure World Reincarnation technique, though they had already contradicted that one in earlier filler episodes. Then there are Naruto’s abilities - they have given him a sort of halfway house between his uncontrolled Nine-Tails Cloak and the Nine-Tails Chakra Mode he obtains after training with Killer B. That all means they take numerous liberties with the established Naruto canon, but despite this the “Power” arc is an entertaining enough, if somewhat forgettable, experience.

With the “Power” episodes out of the way all that remains is a solitary episode to progress the main story, which aside from Naruto finally meeting up with some of the Allied Shinobi Forces doesn’t really go anywhere.

When all is said and done you can look at this set a number of different ways: either it’s a set containing only a solitary episode of “proper” Naruto or it’s a collection of side stories of varying quality. I favour the latter interpretation as those side stories are some of the better Naruto filler and the “Power” arc at least manages to keep the viewer entertained enough to make Naruto Shippuden Box Set 23 worth watching.

6
Mostly filler, but the Power arc is at least some of the better Naruto filler to date.
LATEST REVIEWS