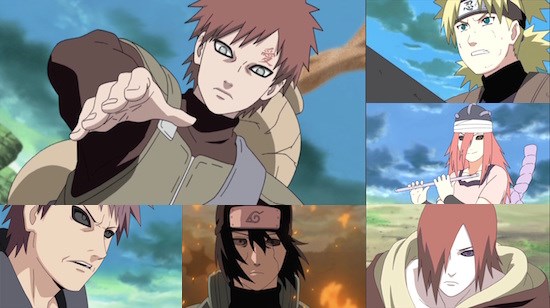 The last Naruto Shippuden set (Box Set 23) to grace these shores was made up almost entirely of anime only filler, with only the final episode reserved for story progression. Thankfully this set opens where the last one left off: the tension is high as Gaara faces off against his late father. Elsewhere Naruto and Bee find their progress blocked by Nagato (Pain) and Itachi Uchiha. This sets the tone for the opening half of the set, high level battles abound as old kage square-off against the new and Natuto faces some of his most dangerous and cerebral battles to date. These episodes showcase exactly where the series should be at this point in its lifecycle; they’re action packed and tense, managing to up the ante at just the right moments.

This setup enables some long overdue exploration of Gaara’s past, especially of his relationship with his parents. The viewer is finally given some insight into what turned the young Gaara into the heartless killer we first met back in the original Naruto series. It also helps explain why Naruto’s subsequent friendship has proven to be so important to his reformation. Similarly, we finally find out just what really happened in Naruto’s last, somewhat odd, encounter with Itachi.

Unfortunately this doesn’t last, as the last half of the set is entirely filler and repeats the sins of many of the recent box sets. The parts you're actually interested in are unceremoniously interrupted with largely vacuous side stories and flashbacks. One such story regurgitates the “Sound Four” in a somewhat misguided attempt to revive the tension of their prior appearance in Naruto Unleashed. To say the writers miss that mark would be somewhat of an understatement, and if anything the reappearance of the Sound Four here takes away from the characters as a whole. Another episode looks back on the relationship of Neji and Hinata - this is somewhat more interesting at least though perhaps overlong. There are a number of episodes covering the reanimation of Hayate Gekko, for those with long memories he is the ninja killed while spying on Kabuto during the Chunin exams. The set winds up with an utterly forgettable episode about an eating contest. Liberally scattered throughout these episodes are the usual flashbacks, as you might expect.

I have lost count of the amount of times I’ve described a Naruto Shippuden Box Set as a “mixed bag” but again the label feels appropriate here. This set then is akin to a Naruto half and half. It is half Naruto done right and half tedious filler. Half action and half inaction. Half progression and half sitting stationary. All in all the good just manages to outweigh the bad, and at least you can always skip the latter half safe in the knowledge you won’t miss anything important.

6
Naruto half and half. Half decent story progression, half mediocre filler.
LATEST REVIEWS