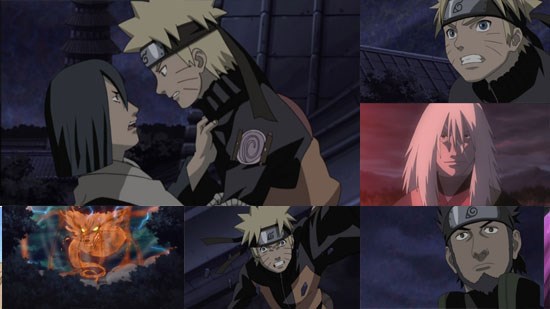 Following on from the last collection of Shippuden episodes, we see the continuation of season three with the Naruto team tackling the zombie hordes that have been unleashed upon Konoha. Not only that, but the four Guardian Ninjas are resurrected to perform a jutsu that will create a lightning blast powerful enough to destroy the village.

There isn’t a huge amount that can be said about Naruto any more. It’s been nearly five years since Manga started releasing the series in the UK (and yours truly started down the Naruto trail).

Naruto nowadays seems to follow a similar layout when major battles take place, with multiple fights going on at once, meaning that screen time ends up being divided between combatants. This usually gives quite a disjointed feel to the entire storyline, which I’m afraid is true in this case as well. Things bounce around for a while and can make the episodes seem quite off-putting. Things do calm down towards the climax of the arc thankfully and for an anime-only set of episodes, they are surprisingly entertaining.

Once one arc is done and dusted, a new one begins in this set with the Akatsuki storyline getting some more attention. This time we actually get to see more of the other Jinchüriki that are similar to our Naruto. Yes we do get more damn Naruto training, but this is quickly side-lined to help focus on the story for a change. We do get an interesting end to the disc as well, especially when some more interesting enemies start taking centre stage.

Technically the DVD is the usual quality we have come to expect from Manga’s Naruto releases. There is nothing exciting in the extras department and of course the English dub and Japanese subtitles are all there and ready to digest.

As I said before, there isn’t much to say about Naruto nowadays. If you liked the series before, then you will know what you are getting here. If you hate anime-only episodes, then you’ll still be buying this for the manga adapted storylines and to be fair, the anime-only arc is actually more entertaining than we have seen previously. If you are reading this and never touched Naruto before, going back through five years worth of DVDs might be quite a task though.

English and Japanese audio with English subtitles.  Trailers and production artwork are the sole extras as usual, so nothing much to speak of here really.