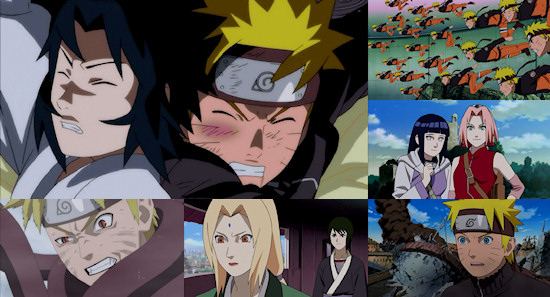 It's been a very long time since I last watched or read anything from the Naruto franchise - for better or worse, the series lost me before it even reached its leap forward in time marked by the move into the show's Shippuden moniker.  Still, with Naruto-based movies always promising a stand-alone offering with only loose ties into the major continuity of the series, the UK release of Shippuden's second movie, Bonds, seems like a perfect opportunity to dip back into this blockbuster anime show.

After popping in and playing the disc, the film certainly wastes no time in getting down to business - before we know it, Leaf Village is under aerial attack by an unknown group of ninja assailants who lay waste to the area and make an attempt on Tsunade's life before making good their escape.

Of course, such an assault isn't likely to go unchecked, although while Leaf Village sends out a crack team of just four ninja to wreak their revenge upon the force from the Land of Sky which attacked them, Naruto himself becomes preoccupied with other matters.  More specifically our titular character, together with Sakura and Hinata, is tasked with accompanying an accomplished doctor name Shinnou back to the home village of his assistant Amaru in light of an attack which has supposedly decimated the area.

If babysitting a kindly old man sounds like a task beneath our favourite jump-suited ninja, it soon proves to be a decidedly trickier mission than previously expected - not only is there more to Amaru than meets the eye, but Shinnou himself also has plenty of surprises up his sleeve.  No wonder then than an ailing Orochimaru also has his eye on the doctor, despatching Sasuke to capture and bring Shinnou back to him.  All of this sets the scene for what you might expect from a Naruto movie - some big battles with the fate of many hanging in the balance, while also giving Naruto and Sasuke the opportunity to fight side-by-side, albeit briefly.

Certainly, there's no faulting the pacing of Bonds - while Naruto's TV incarnation may tend towards overly elongating fights, this film gets it just about right to deliver the expected dose of shounen action without allowing things to grind to a halt with overly long monologues or pointless asides.  There's nothing particularly spectacular about much of that action beyond its opening aerial assault, admittedly, but it at least ticks the "there was fighting and stuff" check box required of it.

Which brings us to the biggest issue about Bonds - it's unspectacular.  One would expect a theatrical movie based on such a huge franchise to be an event in terms of both animation quality and story, but it proves to be neither - the film's animation is passable but little more in general, and its core story is a little wooden, hampered further by its reliance on a contrived attack on Leaf Village which makes little sense and is of little importance in the first place.  This ultimately gives off the impression that Bonds is merely going through the motions - there's little character development to speak of, and the necessity to keep the core of the series untouched limits what this self-contained movie can achieve in the first place.

All of this combines to create a movie that is "okay", but little more - it gets the film's pacing and balance of action spot on, but falters on account of a story that doesn't grab your interest and bland use of the characters available to it.  Naruto fans will get a kick out of seeing a little more of the franchise's world fleshed out no doubt (and in Blu-Ray no less for those looking for High Definition ninja shenanigans, although in this case there isn't a huge leap in visual quality besides a cleaner image and clearer subtitles), but if you're a casual fan or someone looking to return to the series then Bonds isn't likely to persuade you that you're missing something special.

English and Japanese 5.1 audio with English subtitles.  Extras on both DVD and Blu-Ray releases consist of a video montage featuring the film's opening theme, production art and trailers.

5
All of the usual draws of Naruto are present and correct here for the fans - it's just a shame that they're wrapped in a rather stale and uninteresting story.
COMMENT AND DISCUSS
blog comments powered by Disqus