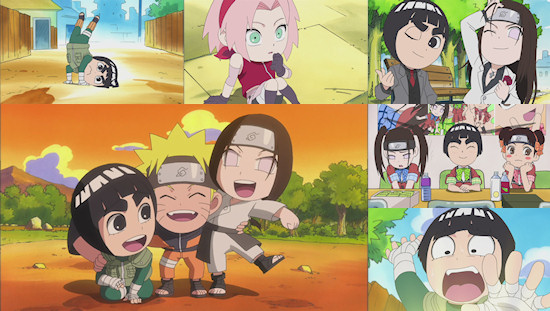 I would imagine that the announcement of a new Naruto spin-off series to take the place of Bleach in TV Tokyo's Japanese programming schedule will have split most anime fans into two distinct camps - those rolling their eyes and muttering under their breath, and those grinning with glee at the prospect of another excuse to visit the Hidden Leaf Village and the lives of the various ninjas residing within it.

There are, however, a couple of points to be noted about this new series - first, its lead character is actually the "ninja with no ninjutsu" Rock Lee rather than Naruto himself, and secondly that the series features super-deformed versions of all its favourite characters as it takes on an entirely comedic bent rather than the largely more serious fare of the series proper.  If you're still on-board with those points in mind, let's see how Rock Lee and His Ninja Pals shapes up.

Effectively, the series' focus is "what the world of Naruto would be like if Naruto was a slice of life comedy", with each episode splitting itself down the middle into two discrete but occasionally slightly linked stories penned entirely with a goal of making the most of Rock Lee, the team of ninja within which he resides and other characters such as Naruto himself, by leveraging their character archetypes to get a laugh or two out of the audience.  Interestingly, the series also seems quite willing to welcome newcomers into its fold, taking time to introduce major characters and their abilities or traits in these initial episodes to ensure that even non-Naruto fans have a change of giving it a bash.

From here, the show's comedy is really incredibly simple - lots of slapstick, a fair amount of childish toilet humour and the like, a smattering of wordplay and gags aplenty, with Rock Lee and Naruto leading the way while Tenten's role throughout is that of the "straight man".  Within this setup, Sakura's place as a love interest to our duo of ninja nincompoops is a frequent feeder for the show's comedy in this opening episode, and doubtless we'll be seeing appearances from plenty of other characters (all voiced by the show's original Japanese cast) as the series progresses.

As tends to be true of any quick-fire comedy anime, Rock Lee and His Ninja Pals is a decidedly hit and miss affair - at times its over-reliance on particular jokes can make some of its skits repetitive, and at others it tries too hard to squeeze a particular idea into Naruto's world and setting.  However, on the other hand these early episodes also manage to wring a fair number of belly laughs out of its setups - watching Rock Lee try to imitate his team-mate's Byakugan or Neji flashing a credit card around are, in the context of their scenarios, just some of the funny moments that elicited a full-on laugh from me.  The series certainly has no qualms about knocking against, if not quite breaking, the fourth wall or referring to things entirely outside of its universe in the name of comedy, and such moments are also great fun and a pleasure to watch.

As you might expect the series isn't exactly a visual tour de force, but for the most part its super-deformed characters are lovingly rendered and at times the production values almost feel higher than Naruto Shippuden itself of late, while the show also boasts frustratingly catchy opening and ending themes that will end up stuck in your head for days whether you like it or not.  The overall aesthetic of the series works perfectly in supplementing its on-screen comedy, especially where visual gags are concerned, so there are no complaints from us along those lines.

Even though the series is trying really hard to aid and assist newcomers who are unfamiliar to the franchise when it comes to watching the show, I would say that Rock Lee and His Ninja Pals is still only a must-watch for regular Naruto viewers - its comedy isn't hugely reliant on in-jokes from or knowledge of its universe, but simply seeing major characters playing against type or failing spectacularly because of those same archetypes is a big part of the pleasure watching the series brings.  For non-Naruto fans, this spin-off is effectively "just another hit and miss comedy series", which almost certainly isn't a big enough selling point to bring new viewers to the franchise as a whole in their droves.

Still, for the most part we can't deny that this is a fun series that has a reasonably good ratio of comedy hits to misses in general, and for Naruto fans with a thirst for a giggle then you can't go far wrong with watching the series.  Provided it doesn't go down the same route of the main series itself and run to hundreds of episodes while hammering its ideas into the ground, you might just want to spare some time to check this out if the concept of Naruto reborn as a comedy series interests you.

You can currently watch Naruto Spin-Off: Rock Lee and His Ninja Pals in streaming form via Crunchyroll.

7
Although it caters to non-Naruto fans, those with a decent knowledge of the series proper will gain the most enjoyment from what is otherwise a hit and miss comedy when shorn of that familiarity.
COMMENT AND DISCUSS
blog comments powered by Disqus