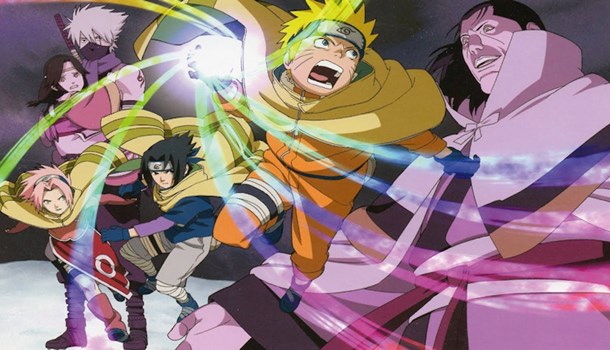 Naruto the Movie: Ninja Clash in the Land of Snow

As with any big series with episodes that number in the hundreds, a film version of Naruto was almost inevitable. So here we have the first in a series of Naruto films, but will Ninja Clash in the Land of Snow actually provide more than just fanservice for legions of Naruto fans?

Naruto the Movie sees Team 7 charged with the protection of the actress Yukie Fujikaze, who also happens to play Naruto’s favourite fictional character, Princess Gale. They escort Yukie as she is set to make her next movie in the Land of Snow - only problem is that the current ruler, Doto Kazahana, has other ideas and schemes to kidnap Yukie for his own ends.

The bigger budget is evident in the animation, detailed character designs and impressive battle sequences, making a welcome change from the repetitive TV animation.

The one major disappointment about Naruto the Movie is that the film focuses mainly on Naruto and Yukie, as he spends his time trying to persuade her to do the right thing and return to the Land of Snow. While Sakura, Sasuke and Kakashi are around for the length of the film, they fail to make any impression as the focus rarely moves from Naruto, so it’s fair to say the film is aimed at fans of the fox boy. If you're not in that particular fanclub then there's very little that will spark your interest here.

In the grand scheme of things, Naruto the Movie adds very little to the overall Naruto narative and should be seen as an elongated stand-alone episode. This in turn is the film's biggest weakness - it's really nothing more than that, so anyone expecting a visual spectacular with wide-reaching implications is likley to be left wanting - instead everything is nicely wrapped up, and nothing new is exposed about the characters.

At the end of the day, the film does what it sets out to do, which is throw more Naruto to the fans, who will no doubt be biting hands off for a copy. For these people, the film will deliver much of what they want on a superficial level. Those looking for more to the overall Naruto story arc by way of a deep look at some of the characters, or even a layered and meaningful storyline, then this may well feel like Naruto-lite.

5
Light, fluffy fun, but a wasted opportunity for anyone wanting more.
LATEST REVIEWS