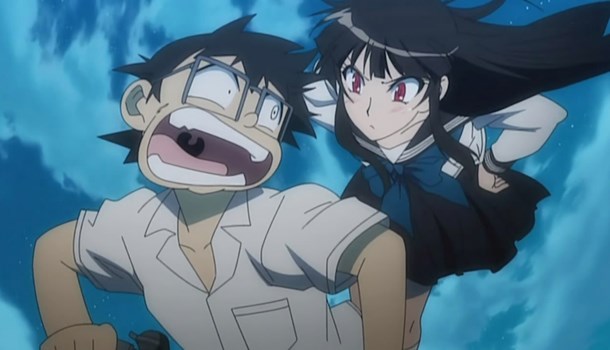 If ever there was a reason not to give up on an anime series after a single episode, then Natsu no Arashi is it - After what can only be described as a poor opening episode (which should probably serve as a lesson to any anime producer as to why you shouldn't start a new series with a filler instalment) the show eventually found its feet, and by the time we cast our eyes over the first three episodes we were a little more hopeful about what it could offer viewers than when we first started.

With the main characters introduced and the basic premise of the series laid out, the remainder of the series certainly finds itself in a far more favourable position to build upon its concept, which it does in the same quirky and often hard to define way that we noted last time around.  Is Natsu no Arashi trying to be a comedy, a slice of life series or something else entirely?  Even at the end of this series it's nigh-on impossible to pin down Jin Kobayashi's creation to any one particular genre.

Thankfully, however you might wish to pigeon-hole the series it actually holds up rather well - Although the comedy is occasionally a little childish (in particular, too much attention is paid to Jun's big secret, taking up large portions of some episodes to the point where it ceases to be of interest) it also frequently manages to be very clever; for example, the cafe owner Sayaka's constant requests to her time-travelling employees to take spoiled milk back to the past so that it's drinkable again, which frequently turns into an ever-more elaborate discussion of time paradoxes and the like.  In typical Shaft style, Natsu no Arashi also delights in referencing other anime and manga, gleefully throwing in catchphrases or animation styles from other shows, or planting the girls from Hidamari Sketch and K-ON! as customers within the cafe.

While comedy and fun is perhaps the core aim of the series, that doesn't stop it from occasionally delving into far deeper subject matter - As per episode three, characters jump back in time to World War II on occasion, and this presents us with some truly gripping moments which really bring home the atmosphere of living in wartime Japan, with the show's animation style forcing home the sheer psychological horror of being caught in a bombing raid in a way that you'd be hard pressed to see matched elsewhere.  Look a little deeper, and the horror of war really permeates the entire series in its own unique way, giving focus to the various friendships it displays while adding a genuine depth of character to both Arashi herself and the other ghosts introduced as the series progresses.

It's this blend of fun overlaying a harder centre that is perhaps what makes Natsu no Arashi the kind of series that will grow on you - A couple of episodes in I felt absolutely nothing for any of the major characters, yet by the half-way stage I found myself genuinely warming to them.  In a sense this mirrors Jin Kobayashi's last work, School Rumble, which managed to take a pretty generic high school comedy yet infused it with some moments of genuine emotion... when you find yourself touched by a character's situation, it never fails to make the comedy that much funnier and the drama that much more tense, a state of affairs which certain aids Natsu no Arashi.

That may not be enough to turn this show into a classic, but to my mind it certainly makes it worthy of consideration - Chances are you won't see a new anime series quite like this one in 2009, and that quirky nature we mentioned could leave you having something of a love/hate relationship with the series.  This series biggest problem is that there isn't enough funny material for fans of comedy, nor is there enough drama and excitement for lovers of those particular bullet points.  However, if you're intrigued by the thought of a series that constantly seeks to blend the two against a framework of friendship and time travel, then you could do a lot worse than heading over to Crunchyroll and checking out Natsu no Arashi.

7
It's a difficult series to define, but Natsu no Arashi's quirky blend of humour and human drama works surprisingly well at times.
LATEST REVIEWS