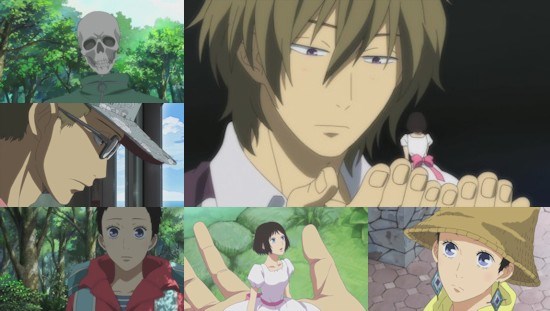 The first few episodes of J.C. Staff's adaptation of shoujo manga Natsuyuki Rendezvous may not have featured stellar, show-shopping instalments, but it's story - which I've playfully dubbed Rokka and Shimao (Deceased) - certainly struck some impressive notes during its first three episodes to suggest that it could do something notable with its story of death and romance.

The bad news is that the remainder of the series is very much in the same vein, in that it delivers occasional striking and impressive performances in drawing upon a tale so packed with emotion, but neither as frequently nor as relentlessly as you might hope from such a series.  Of course, its broad focus remains tightly on the love triangle between the widow Rokka, young co-worker and admirer Hazuki and deceased husband and resident ghost Shimao whom only Hazuki can see - it's a smart set-up that quickly moves on from the quirkiness of its concept to get to the real heart (or hearts) of the matter, with Hazuki confessing his feelings to Rokka and Shimao's feelings of jealousy and the like growing ever stronger.

What Natsuyuki Rendezvous does well is that it's far more subtle in its emotional range than that - Shimao hates the attention newcomer Hazuki is affording his wife, yet beneath that there's a real sense of guilt as he gets to clearly see how his memory is holding Rokka back in finding happiness, while Rokka herself is torn between her feelings swaying towards Hazuki despite her clear and absolute devotion to her husband.  Throughout the series, all three characters find themselves caught between a proverbial rock and a hard place in their own unique ways, and watching how they deal with this situation is fascinating and occasionally moving to the point of being hard to watch - dealing with loss and the death of a loved one is a difficult subject that is handled in an admirably frank way here.

However, for each of those moments scattered throughout the series that bring you close to tears or make you catch your breath as its emotional impact hits home, there are numerous other occasions where it misses the mark completely.  In essence, this is largely due to one of the major plot threads of Natsuyuki Rendezvous, which sees Hazuki and Shimao swap bodies.  This isn't a bad concept in itself, admittedly, but this state of affairs lasts for almost the entire remainder of the series - worse still, it leaves Hazuki stranded in a fairy tale world which does next to nothing to either advance Hazuki as a character or dig deeper into either Hazuki or Shimao's mental state.

What's more, the further the series and its body-swapping premise goes on, the harder it gets to like any of its main characters - in particular, Shimao turns from a character you can sympathise with even when he's doing the wrong thing into a cynical, manipulative and almost reprehensible character, while even the previously wonderful Rokka looks increasingly selfish as she makes a number of out of character decisions.  Perhaps this is one of the aims of the series - a suggestion that holding onto anything too tightly will only corrupt that person's intentions to the point where they're toxic - but it's tough to swallow in a show where you really need to have someone you can either root for or empathise with.

The result of all this is a show that wastes so much of the potential it allows us glimpses of - there's plenty of room in the world for a romance-led series that doesn't involve high school romance and getting flustered about kissing or holding hands, and if nothing else it's enjoyable to see some grown-ups getting involved in an equally grown-up entanglement.  It's the kind of series that I'd urge people to watch, but to only watch particular episodes of - its second instalment absolutely nails the emotional content of the series with one hit in a brilliant fashion, while episode seven zooms in succintly on the confusion felt in the wake of losing a loved one.

These high points, however, serve only to accentuate my frustration at Natsuyuki Rendezvous as a whole - it could have done so much, but frittered a lot of its potential away by heading in the wrong direction.

6
A couple of outstanding episodes get lost in the midst of a series which loses its direction, and a lot of its emotional impact as a result.
LATEST REVIEWS