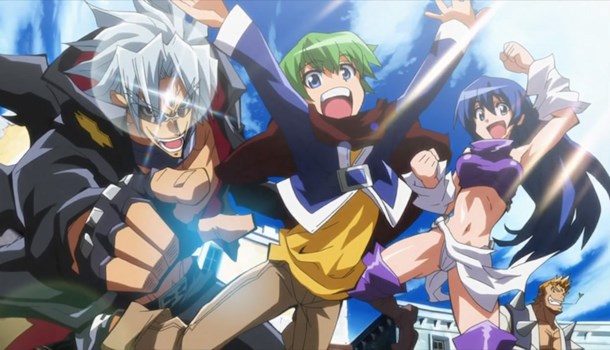 Sometimes, an anime series arrives with a title that effectively writes its own jokes - let's hope that I don't have to make any quips about this being a "needless" DVD release from MVM Entertainment, shall we?

In a not entirely innovative scenario, this manga adaptation produced by Madhouse is set half a century after World War III, in the year 2130 to be precise.  The "ground zero" of that war is a place known only as the Black Spot - a place where the so-called Needless of the show's title are hunted down ruthlessly in a dog-eat-dog world.  Luckily for these individuals, the reason for their persecution also offers them the ability to fight back against those who would see them done away with, as each needless has a special power of some kind known as a Fragment; these powers run the gamut from the predictable to the rather bizarre, while certain individuals known as "Missing Links" have more fully-fledged abilities that place them, in the show's parlance, "closer to God".

We enter into this world via a young boy named Cruz, a forgettable young lad who runs into trouble along with his sister only to find himself saved by a mysterious Needless "priest" named Blade.  With his sister lost, Cruz is taken in by Blade and his friends, leading him into a whole world of troublesome adventures, as the gang set themselves up as a resistance force against Simeon, a pharmaceutical company based within the Black Spot with a reputation for hunting down and exterminating Needless.

For a little while, Needless feels like it's going to be little more than a typical "monster of the week" (or rather, Fragment of the week) show, but thankfully once it's set up some of its basics and used this premise to build up its character roster we quickly shift our focus on to the show's back story and main plot threads, that being cloning and the so-called "Adam Project", a project which is very much at the heart of both Blade and his nemesis Arklight's motivations.  Once Blade's trusty (and busty) partner in battle Eve is kidnapped by Simeon, we're all set with a story arc that happily soaks up the rest of this first half of the series quite easily.

One think that quickly becomes clear as the first half of this series progresses is that Needless is also a vehicle for fan service - the number of reasons to get the female cast of the series out of their clothes, to have clothing torn off or to flash their underwear grows by the episode, to the point where it soon becomes gratuitous and decidedly unsubtle.  Then again, nothing that Needless does pretends to be subtle in the first place - from the soundtrack to the plot, everything is in your face and made clear from the outset, while the show also frequently smashes through the fourth wall in the name of comedy with varying results.

The biggest issue facing Needless despite its brash and colourful nature is that it all feels.... well, generic.  Both the action and the plot is very much a "by the numbers" affair, and even the various powers exhibited by the Needless all seem like the kind of thing we've seen before in umpteen other shows, with even the more unique abilities soon losing their lustre.  Add in a protagonist who is actually a waste of space until the end of the show's first half, and some decidedly iffy animation quality (when it isn't lovingly depicting crotches and heaving bosoms, at least) and there isn't all that much to mark out Needless from the crowd of similar action-cum-fan-service shows on the market with the exception of its gloriously addictive closing theme song.

On the flip side of that, this also means that there isn't anything particularly bad about Needless either - it moves forward at a relentlessly quick pace to ensure that there's always something going on, and there's no denying that the sheer energy the series carries can be infectious at times within a series which clearly doesn't take itself too seriously at all.  In terms of delivering entertainment that won't tax your brain, there's something to be said for Needless if its premise and the mixture of action and titillation tickle your fancy.

In terms of the specifics of MVM's release, the overall video quality of this first half is good, and subtitles are comprehensive and almost faultless.  The English dub is also more than passable - it won't win any awards, but it makes for a perfectly enjoyable viewing experience without setting your teeth on edge or anything of the sort.

Although its second half may branch out into some kind of magnum opus (okay, so maybe not), Needless at present feels like the kind of series that might deliver sufficient entertainment as an impulse buy to while away a rainy weekend, but for a more considered purchase there are plenty of other series that do what Needless sets out to better.  Thus, Needless doesn't live up to its name in terms of a potential purchase, but it wouldn't deserve the title of "Necessary" either.

English and Japanese audio with English subtitles.  The sole extras here are trailers and promo videos for the series.

6
It isn't a needless release, but whether you're looking for action or fan service there are other series that do it better.
LATEST REVIEWS