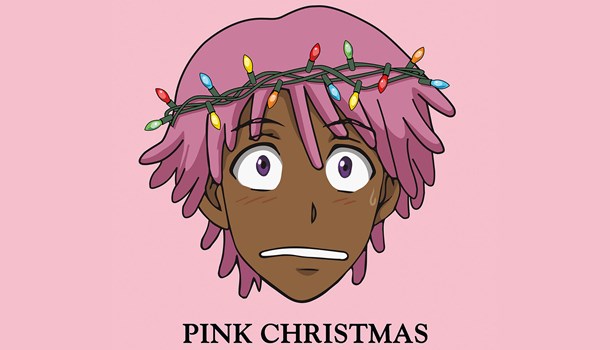 Returning for a special Christmas episode Neo Yokio: Pink Christmas sees Kaz Kaan, Neo Yokio's number 2 most eligible bachelor and magistocrat sick in bed on Christmas eve. In order to take his mind off his illness during the festive season, his mecha servant Charles tells him a Christmas story using Neo Yokio as the setting with Kaz and the rest of the cast of the show as its key characters. The story itself is also set at Christmas and begins with Kaz trying to find the perfect secret Santa gift for his arch nemesis and Rival Arcangelo. Along with this; Kaz's aunt Angelique, the twin sister of his Aunt Agatha is coming to pay a visit this Christmas which causes tension between the two aunts.

Neo Yokio's first season was known for a few things, mainly to do with Big Toblerones and other memes. In my review of the first season I listed a rather substantial amount of faults yet somehow enjoyed watching it. It was a rather odd viewing experience where I enjoyed seeing how it mishandled some of the themes, and aspects of it's storytelling, animation and even the voice acting. This time around things have improved, ever so slightly. However with the improvements made it takes away some of the charm and ironic enjoyment I had for the first season; instead making this a rather middling viewing experience. We'll begin with one of the major criticisms I had from the first season, that is Jaden Smith's voice acting of the main character Kaz. Funnily enough one of the few things that hasn't improved. I'm not sure how much time has passed since the recording sessions of season 1 and this special but it seems like he hasn't improved at all. His performance is still flat, stilted and emotionless. You can immediately tell how things are going to go from the start when Kaz, who is meant to be sick with a cold sounds no different from how he usually sounds. There is also a scene near the end where Kaz is forced to rap at a Christmas show. He starts off not wanting to do it with his rap sounding very improved and forced. Then as he gets into it he still feels really uncomfortable doing it. Here its hard to tell if the character of Kaz is still really uncomfortable rapping or if Jaden himself is bad at rapping.

In terms of voice acting, lets move onto a big positive. Which is pretty much everyone else in the special. For some reason the voice actors are hamming up their lines more and sound like they're having fun with their deliveries. The shining star of this special has to be the Sales clerk Herbert, voiced by Richard Ayoade. This character had some of the funniest random lines in the first season and to give him a lot more screen time and attention with more lines was a smart move on the creators part. His line delivery and overall energy just shows how much fun he was having. That being said the dialogue that he says as well as what the other characters say ranges from juvenile to outright bizarre. The dialogue seems more self aware this time around by throwing in random swears all over the place along with weird references to “original content” and “toblerone jokes”

Which leads into another aspect of the whole episode; this really odd self aware tone the whole thing takes. Its as if the show knows that people enjoyed season 1 ironically and is making jokes to cater to this audience. Also in terms of Christmas episodes this is a rather bizarre one that doesn't really seem to have a moral message or many feel good moments. In fact some of the aspects of it are quite malicious. The best example is in one scene Kaz gets a drug put in his drink at a party causing him to have a drug fueled hallucination/nightmare. When he awakes the next day and tells people about it he gets reactions that boil down to laughing about how funny he was acting at the party and that he actually had something interesting happen to him. Even Kaz's reaction is minor annoyance at having to buy a gift for the guy who drugged him. All of which completely ignore the legal issues and severity of what happened to him.

Also within the special the second half takes a rather weird stance on being anti-consumerism with one character launching a stand against the shopping and gift giving aspect of Christmas by declaring “FUCK MATERIALISM” the oddest thing about this is that one character tried to do the same within the first season and was mocked for it. Yet everyone here goes along with it. We see this stunt was mainly a ruse to get people to buy tickets for his Christmas show and give his podcasts more listens. We do see the downsides of people not buying things. The worst we see is a character lose their job and Kaz's friends get annoyed that this anti-capitalist attitude is interfering with their attempts to sell their cocktail brand in the form of canned drinks, clothing etc. These anti-Christmas sentiments all just seem thinly veiled. To expand on this the whole thing takes a dark turn revealing something major and finishing on a downer ending. That is until we cut back to a reminder that all of this was just a story made up by a robot to amuse a sick man in bed.

All of this puts Pink Christmas in a weird place for Christmas specials. It's not wholesome enough or delivers enough of a moral message to be considered a good Christmas special. It's not anti message enough or mean spirited to be a subversion. Instead it sits in this weird limbo where the whole thing is just a side story meant to deliver entertainment. Unfortunately without the usage of Richard Ayoade's character to inject more humour into things there's really not much here worth watching. It doesn't go as bizarre as the first series did. Instead just coasting through it's hour run-time to deliver a rather forgettable episode.

4
A rather forgettable Christmas Special