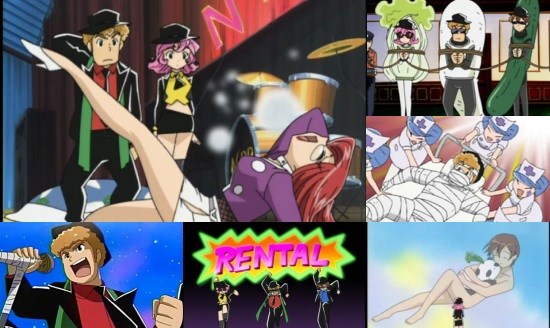 They say that good things come to those who wait. Well, that’s what Anime Limited is hoping anyway as this year sees the release of one of the most-delayed anime releases in memory as Nerima Daikon Brothers finally hits shelves a mere three years after it was announced for the UK. We’ve certainly gotten the waiting part down (those who hadn’t forgotten the title existed anyway) but will the show provide those good things? Wait, what? Shinichi Watanabe did this? No not him, the other one...Nabeshin?!? Oh boy this is gonna be good!

The Nerima Daikon Brothers are a wannabe singing trio based out of Nerima in Japan. More specifically they’re based out of a stage-cum-house in the middle of a daikon field as they haven’t exactly mastered singing for any kind of profit yet. Hideki owns the field and nominally leads the group, Ichiro is the taciturn straight-man who is inexplicably the number-one host at a local host club and Mako longs for riches and spends most of her time making sure that Hideki still believes that its illegal for him to marry her (they’re cousins). Joining them are a whole host of madcap foes and a few nominal allies too, like fan favourite director Nabeshin himself as a poorly disguised rental shop owner and the super-adorable Pandaikon (a panda who wears a hat, tie and sunglasses). With the whole gang in tow, Hideki will lead them into an utterly bonkers series of get rich quick schemes which inevitably see the gang achieve their dreams for the briefest of moments before being dragged back down to earth in a variety of musical comeuppances.

So, here’s the question you’ll ask yourself repeatedly whilst watching this show – why has no-one ever thought to make a Blues Brothers anime? Okay, there was that short-lived idea for an animated series in 1997, but Nerima Daikon Brothers is the proof of concept that it would work really well (and I’m sure Dan Ackroyd would be up for it). The series is so heavily influenced by the Blues Brothers that I’m surprised that there are so few direct call-backs to them, but then Nabeshin was clearly having so much fun sending up everyone from Michael Jackson to John Goodman that he simply didn’t have room for everything. The series is frankly one of, if not the, best musical comedy series you’ll ever see blasting you with a near-constant stream of music, visual gags and off-the-wall comedy ranging from simple gags to the filthiest toilet humour all in the name of fun. Whilst the show's format is both episodic and very formulaic, that by no means counts against it. Indeed the show does like to capitalise on this at times, often pushing right up against (though rarely breaking) the fourth wall.

The show was clearly operating on a very tight budget however and you can very much see the strain of it throughout the show's run. Even for a show made ten years ago Nerima Daikon Brothers doesn’t look all that good sadly, with animation and visuals that today would never really pass muster. Meanwhile, whilst the music is catchy money has had to be saved here too with the same three or four songs being used over and over again with different lyrics (something which the characters themselves tend to refer too). As good as the show is you can help but wonder just how much more bananas things would have gotten with a healthier budget to let Nabeshin go all-out.

One area where the show does excel is in the vocal performances though. The Japanese dub is great, with Shigeru Matsuzaki doing a fabulous job as Hideki and pulling out a great singing voice.  As do, somewhat shockingly, the English dub cast! It’s been a long time since I’ve heard dubbed songs in an anime but they really go for it here with almost every song dubbed over by the English cast, who seem to be relishing the opportunity and manage to really make things work. They aren’t quite as skilled as their Japanese counterparts but they make up for it in pure gusto and the result is arguably the best dub I’ve heard in a decade!

We’ve been sat waiting for three years for Anime Limited to bring this show out - yes its DVD only, and yes the menu design (which I’m assured was not Anime Limited’s choice) is the ugliest and most primitive one I think I’ve ever seen, but Nerima Daikon Brothers is absolutely worth it. It’s a brilliant, insane and manic show from the director of Excel Saga and Puny Puny Poemy, and if that doesn’t make you want to instantly watch this show then you are in for a rare treat when you pop this into your DVD player!

English and Japanese stereo audio with English subtitles. Extras consist of clean opening and closing animations, plus commentary tracks on all episodes with the Japanese cast and director.

8
Nabeshin's singing his heart out!