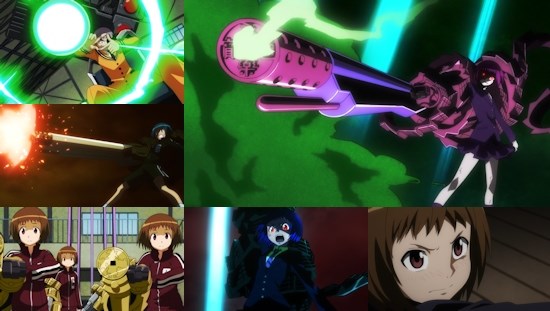 Poor Oda Nobunaga... after much adoration as a pivotal figure in Japanese history, he now frequently finds himself imagined by animators as a schoolgirl or, in this instance (and perhaps more fittingly) a kick-ass gun. Nobunagun, to be precise - a name chosen simply, as the show's protagonist puts it, "because it sounds cool".

That protagonist is Shio Ogura, a girl who knows all about cool stuff - at least, she does when it comes to military hardware and the like. Yes, Ogura is very much a dyed in the wool military otaku, whose overbearing fascination with stuff that can blow things up leaves her ostracised from the rest of her class, particularly the other girls who have little interest in discussing the finer points of tanks with her. Not that Ogura really seems to mind for the most part - she's perfectly used to a life of isolation and getting by on her own, so even a school trip to Taiwan in which she finds herself with nobody else to hang out with isn't enough to get her down for long.

Perhaps this is simply a case of ignorance being bliss however, as during this trip Ogura finds herself approached by the school's most popular girl Kaoru Asao, who seems to have taken an interest in this unusual girl. Just as the first shoots of friendship begin to blossom, so this happy moment is interrupted rather rudely by no less than the first phase of an alien invasion. Not only is this distressing but also dangerous, and with both Kaoru and Shio in the midst of this assault and the military counterattack there's little time to marvel at the military hardware on display, mostly because it's being decimated by these alien creatures, known as Evolutionary Invasion Objects.

Thankfully, help is at hand via a group of super-powered humans known as E-Gene Holders, each of whom has powers passed down through generations and derived from the DNA of a historical figure, be it the defensive abilities of Gandhi or the more frightening offensive presence of Jack the Ripper. What nobody has realised as this scene plays out is that Ogura is herself an unwitting E-Gene holder, and the embodiment of Oda Nobunaga, who emerges as a gun in the heat of battle to help turn the tide against the EIO. Having revealed her true powers, it's left to Ogura to decide whether to join other E-Gene holders in the fight to protect the Earth - but let's be honest, it wouldn't exactly be a spoiler to reveal what her ultimate decision proves to be.

If we had to sum up the first couple of episodes of Nobunagun in particular in a few words, those words would be "in your face" - from its shouty English opening theme by Japanese metal group Pay Money to My Pain, Nobunagun knows what you want from a series like this, that being things blowing up, bullets being fired and crazy allies and enemies with similarly crazy powers alike. If that is indeed what you're after, then boy does Nobunagun deliver early on - although it naturally has to slow things down at the end of the first major EIO assault, it's hard not to be caught up in the sheer, energetic enthusiasm the series offers, and it's immensely entertaining. Whether this energy and entertainment value can last is another question of course, and even come its third episode it feels a little out of breath, but that's something that we can ponder another day.

For now though, Nobunagun has managed to exceed our expectations, even if those expectations were "this will probably be terrible". Certainly, the show isn't exactly a visual tour de force, and it only manages to scrape by with a little panache in its delivery and the fact that it's simple, limited aesthetic somehow fits the outlook of the series at this point. Even its characterisation of Shio Ogura herself has been enjoyable, walking the line between otaku loner and relatively normal girl without falling into any of the typical pitfalls of such characters - a fact offset by some slightly uncomfortable moments in episode three, but still more than can be said for a lot of similar series.

Nobunagun may be no classic in any sense of the word, but its opening episode has been one of the most directly exciting and thrilling of the winter season - a rip-roaring action packed affair that continued into an equally enjoyable second episode. There are no shortage of things that can go wrong with the series in the fullness of time, and we wouldn't be surprised if some of those elements rear their head and ruin everything, but for now Nobunagun is more fun than it really has any right to be.

Maybe leveraging Oda Nobunaga's name isn't always such a bad thing in the sphere of anime after all... wait, who are we kidding here?!

You can currently watch Nobunagun in streaming form via Crunchyroll.

7
Its straightforward in both looks and aims, but Nobunagun is nonetheless a lot of fun to watch thus far.
LATEST REVIEWS