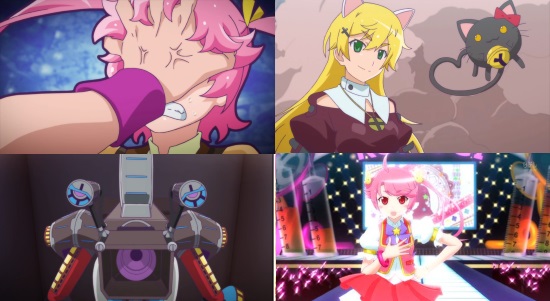 Perhaps I should say up front that Nurse Witch Komugi R a bad show. I watched it so that you don’t have to, because I’m nice like that!

Komugi is a young girl who aims to become a local idol, with talent agency LovePro. Currently she can’t quite reach her dream and spends most of her working hours singing at supermarkets, and other such trivial tasks, whilst her fellow idols Kokona and Tsukasa effortlessly breeze into much more prestigious jobs. She has however been noted for potential greatness, as she encounters a strange creature named Usa-P from the Fanta-C World. Usa-P grants her the power to transform into a Cam-P Girl, in order to fight off monsters as Magical Nurse! Alongside her mysterious new colleagues, Magical Maid and Magical Sister, she must work to turn monsters back into cards and save people, all whilst trying to further her dreams of stardom.

There's something about this show that just makes me so... angry. It’s probably linked to the fact that the whole thing is just lazy, it lacks any kind of ambition. This isn’t a series that wants to put a new spin on the genre, or explore an interesting angle. Nurse Witch Komugi R feels much more like a show designed to simply exist to fill up a gap somewhere. It seems as if the show, which is actually a remake of a 2002 OVA series, is suggesting that it’s supposed to be spoofing the rote, stereotypical magical girl shows. However, it fails utterly and, in-fact, becomes one of those self-same stereotypical shows. Albeit without an ounce of the charm or humour that they tend to bring with them.

There’s next to nothing that’s laudable about the show. The characters are cardboard cut-outs, both in design and personality, the story is all but nonexistent to the extent where - after a few episodes - there doesn’t actually seem to be any point to any of the goings on (certainly the series conclusion doesn’t really suggest that anything has been achieved). And the scripts are bland and flaccid. Heck, even the series’ big fan service episode can’t manage to present anything that would titillate even a sex addict who’s been locked away without any form of stimulation for a decade.

It’s not as if the people working on the show were without the necessary talent either. Director Keiichiro Kawaguchi went on to direct the utterly fantastic Please Tell Me! Galko-chan, character designer Aiko Watanabe worked on the Monogatari franchise, and Tatsunoko Production has excellent form too - producing everything from Genesis Climber MOSPEADA and Super Dimension Cavalry Southern Cross (both better known in the West as the second and third arcs of Robotech) to the original Gatchaman and Casshern franchises! Given this level of talent it seems impossible that Nurse Witch Komugi R could have turned out this way!

But turn out this way it did. Whilst we’re on the subject of the production we do have to note that it’s...acceptable. Barely. If nothing else the series has managed to be made in a distinctly average manner, which means that the animation is watchable, the CG is OK in a low-res Love Live Concert kinda way and the music is listenable yet instantly forgettable.

There is very little else to say on Nurse Witch Komugi R, other than why would you bother with it given the slew of amazing shows and films already available? The best Nurse Witch Komugi R will do is replace those sleeping pills you keep in the bathroom cupboard.

2
Hope she can nurse you back to health from the coma this show'll put you into!
COMMENT AND DISCUSS
blog comments powered by Disqus