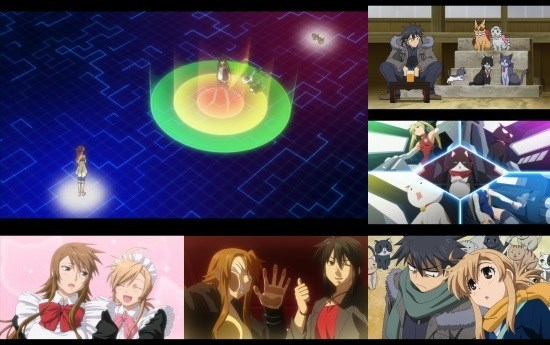 After an accidental incident of vandalism, Jyunpei Kosaka finds himself cursed by a cat god. In order to appease its anger he must grant one hundred wishes to cats, and failure to do so will result in him turning into a cat himself. Fortunately, with the curse comes the side effect of being able to understand and communicate with cats. The problem however is that Jyunpei has a very strong cat allergy - thus if, he fails to grant their wishes and turn into a cat, his allergic reaction will kill him. Jyunpei not only has allergic reactions to take into consideration when granting cats requests, but also his complex love life between himself, his crush Kaede Mizuno and his childhood friend Kanako Sumiyoshi. On top of this, various other girls appear to grab Jyunpei's attention and divert or aid him in his goal of granting cats requests. Thus Jyunpei has to balance his social life whilst helping cats to remove his curse.

Nyan Koi establishes its rather light-hearted and easy-going attitude fairly quickly with its rather quirky take on the harem comedy genre. With its supernatural element and curse being mostly played for laughs it really gives paws for thought (Groan - Ed) about what kind of show this is. The series does a decent job of balancing Jyunpei's attempts to resolve requests and his love life problems, although Jyunpei gives more precedence to his love life given that he sees helping cats as a hassle. This provides some rather comedic exchanges happen between Jyunpei, his family's cat Nyamsus and local neighbourhood cats, most of which complain about Jyunpei's lack of motivation as they point out that removing the curse would be simple and quick if he dedicated actual time to doing it. Each episode usually revolves around an issue Jyunpei has to deal with in regards to helping a cat while simultaneously trying to deal with an aspect of his social life.

Much of the comedy within Nyan Koi comes from how simple the cat's requests are; they range from mundane things like helping lost kittens find their way home to feeding hungry strays and thanking humans who have helped them. Adding to the comedy is Jyunpei's reluctance to help due to his allergies and how secretive he needs to be whilst helping cats in fear that his curse will worsen if other people find out. Given that we see a lot of cats asking for favours it goes without saying that if you like cute anime cats then you will get some level of enjoyment from Nyan Koi.

Of course, alongside all of this is the show's harem aspect. As far as these things go the focus here is a love triangle, with other girls appearing to either help or hinder one of the main girls of the show, all of which is played up rather comedically and doesn't really feel dramatic at all. If you haven't seen a harem series before, then Nyan Koi acts as a good entry level to test the waters since this aspect is played for laughs and feels like a natural part of the story rather than adding in forced drama and conflict, and at least if the harem aspect isn't working there's also cute cats to look at. Inevitably, with these harem elements comes some fan service, although in comparison to other shows Nyan Koi is rather tame in comparison. The most extreme things get is an episode where all the characters go to a swimming pool and the hijinks that ensue there, and a few fan service shots used as transitions in the same episode.

For all of Jyunpei's granting wishes and some level of development in relationships between the characters, Nyan Koi doesn't really go anywhere and leaves all of these things ultimately unresolved. The biggest frustration about this is the series ends with them a very clear hook for a second season (which never arrived) coming soon. Although this was done in the next episode preview section which the series uses for jokes and should be taken with a pinch of salt, it still adds to the irritation for anyone wanting a neat and tidy ending to the story.

The dub for the series is provided by Sentai Filmworks, whose output is extremely hit and miss. For Nyan Koi this effort could be considered a - all of the voice actors who provide voices for the cats sounding like they're having fun with their roles, with one character in particular Nagi Ichinose all-but chewing the scenery whenever they appear. Their voice gives a rather over-the-top performance and provides a really fun high energy impact that is impossible not to laugh or smile at. Beyond this standout, everyone else is okay in the dub - you'll fine a few lines of dialogue that have stiff performances here and there but for the most part, this is an extremely likeable dub.

While Nyan Koi may not do anything spectacular, it does provide a purr-ity good entry into the harem genre. With the right mix of cat comedy and harem, the series provides a rather pleasant viewing experience. While it does leave things unresolved, for what it is you get a nice little tail of cats and love.

7
A rather a-meow-sing show with a lot of charm.