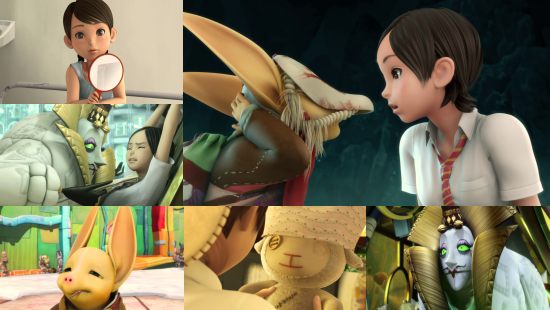 Ever since I was little I have had a knack of losing things that I need. When I was eleven I lost a very fancy propelling pencil in my bedroom somewhere. It wasn’t neglected or anything - I just lost it, and I knew for sure that it was in my room. Thirteen years later, I found the pencil as I was taking down my shelving units from the wall and moving out from my parent’s home. It fell into the crack between the shelf and the wall. I was lucky I think. No one took it.

But what if someone had? What if those items that you simply forgot existed vanished one day never to be seen again? According to the stories told to impressionable young children, there are fox spirits who seek out those items are forgotten and neglected. These spirits rescue the items, taking them to a place where they will live again able to realise the preciousness of their memories.

“Get them all, get them all… what you neglect, we collect.”

Haruka, having been told this story by her sickly mother as a child, believed every word of this legend and when her mother finally passed away, she made an offering to the spirits to find her mother and bring her back. Unfortunately for Haruka, her wish never came true. Haruka’s mother left behind a hand mirror; a rather dashing and ornate example of enamel and glass. Within the mirror contained all of her hopes, feelings, and memories for Haruka and her future and, while growing up, the mirror never left the side of either mother or daughter, capturing all within its all-seeing reflective surfaces. As time passed, the mirror became forgotten, a lost relic caught between house moves, a lack of storage space, and the growing maturity of Haruka as she grew from a toddler to a final year high school student. The mirror became neglected and it, along with several other formerly beloved items of Haruka, disappeared into the hands of the foxes… never to be seen again.

Haruka, as a full-fledged member of the teenage species, is as self-centred as they come, blind to the sacrifices of her family and moody. During a tantrum she decides to go on an expedition to her grandparents’ in the hills, and onwards to a nearby shrine. She prays for her mother again, leaves an offering and wanders around aimlessly, bored, until she eventually dozes off in the sun. While dozing, she finds herself face to face with one of the foxes, or at least a creature which resembles a small fox. The creature relieves Haruka of her house keys, and makes a bee-line for the woods. In a momentary lapse of good judgement, she follows the creature all the way to a peculiar spring. This spring, as it turns out, isn’t what it seems and is in fact a portal to an underworld that contains all of the lost possessions of mankind. This underworld is Oblivion Island.

After a Wonderland-style landing minus the frilly dress, Haruka finds herself face to nose with Teo, the diminutive collector of the neglected, and upon realising that she is in the place of legend where neglected items go, she manages to convince (read: cajole) Teo into helping her find her lost mirror. Haruka follows Teo into his world constructed of discarded spoons, playing cards, Lego, road signs, bottle tops and all manners of collected items which to any human eye would be junk - to the people of Oblivion Island, this junk is simply building material. They collect the neglected items from the human world in order to survive and to further their civilisation. It’s not a malicious act at all!  Well, that is a partial truth. Ruling Oblivion Island is the Baron. He rules the land with a metrosexual fist forcing those beneath him (literally beneath him, he lives in a helium blimp) to continue collecting items, specifically mirrors, in order to further his regime. It turns out that mirrors are a major source of magical energy, and Haruka’s missing mirror just happens to be one of the most powerful and sought after magical artefacts which the Baron can’t wait to get his claws on!

Therefore, it is indirectly up to Haruka, whose quest for her beloved mirror forces her into the path of the idiot Baron and his robotic armies, to either help save the citizens of Oblivion Island from their tyrant or find herself separated from her memories and forced to live the rest of her life in slavery.  Cue armies of sword wielding plushies and dolls…

Oblivion Island: Haruka and the Magic Mirror is fabulously good fun from start to finish. From the moment that Haruka slides into the reflective pond in the human world, you are propelled into a world of immersive, vivid colour and ceaseless action that mercilessly captivates your attention. Okay, so the story and the plot won’t win any awards for writing but it is readily accessible to both younger audiences, towards which it is aimed, while keeping adults entertained through its quite clever slapstick moments.

The animation style is unique and is perhaps one of the film’s selling points. CG animated series are becoming more common these days, with most animation now CG animated to some degree in order to reduce production costs. What is not so common within the sphere of anime is a fully CG animated film with all of the characters being modelled in computers and animated. This is where Production IG, have worked their wonders - Oblivion Island feels like a combination of the fanciful and colourful animation style reminiscent of Pixar films, and the highly detailed and hyper-detailed worlds expressed in the Final Fantasy movies or Sky Blue. Having learnt from their competition, Production IG have stayed away from the uncanny-valley and instead presented us with a film which can stand its own ground in terms of animation style. It is both beautiful, colourful and nay, a joy to watch. And, thanks to a rather good Blu-Ray transfer, it is also an extremely good source to capture pretty desktop wallpapers from!

Having sat through both the original Japanese dialogue and the English dub, it’s my opinion that in this case the English offering is the superior product, purely because of the efforts of Mr Seitz who plays the Baron. I am not sure which raving politician the actor is channelling, but he does this quite beautiful thing with the Baron character, turning him from a weirdly eccentric chap with delusions of grandeur into a deranged psychopath in a split second. With Haruka and Teo the performances are quite comparable between the Japanese and English, but I do wish that the lady playing Teo would stop channelling Kyubey when Teo gets angry, it gets rather creepy at times…

Other than the entirety of the Ghibli back catalogue and Welcome to the Space Show, there is precious little out there which I would show to my niece to introduce her to the world of quality Asian animation. However, Oblivion Island is now the next title which she will find on her doorstep from an unknown Internet individual. Oblivion Island is a quirky but thoroughly enjoyable film aimed at a family audience and accessible to all ages that will keep both young and old alike fixated on the TV screen of a Sunday afternoon.

English and Japanese 5.1 audio with English subtitles.  Extras consist of:

8
An enjoyable and inoffensive film that will keep even the most stubborn of family members glued to the screen.
COMMENT AND DISCUSS
blog comments powered by Disqus