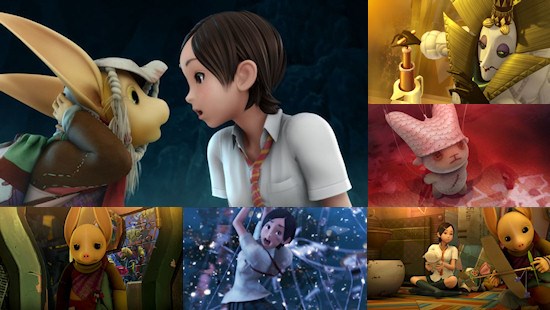 Everyone loves surprises, don't they?  If you're preparing to argue that point, then you clearly weren't at the Filmhouse cinema for the "mystery film" screening of Scotland Loves Anime's Edinburgh event.  Despite being asked to pay their hard-earned cash to see a film with no knowledge as to what that movie might be (well, we knew what it was, but we don't count), the theatre was nonetheless absolutely packed as whispers reverberated around the auditorium as to what the audience could be about to see.  Thankfully, I think it's safe to say that the vast, vast majority of attendees weren't disappointed by the time the final credits rolled, having sat through and enjoyed the UK premiere of Oblivion Island: Haruka and the Magic Mirror.

In a sense, Oblivion Island is rather an oddity of a movie - an almost entirely CG-produced film by Production I.G. (who aren't normally known for such things), with direction provided by Shinsuke Sato, whose other recent endeavours include the two live-action Gantz movies.  Needless to say, Oblivion Island really couldn't be any different from the blood-letting gore-fest that is Gantz, instead providing us with a rather Pixar-esque film and concept.

At the centre of the story is, of course, a girl named Haruka - after being introduced to her as a young child with her mother in hospital as she recounts a tail of fox gods with a propensity to take away and return forgotten items.  This story clearly strikes a note in the heart of our protagonist, and upon her mother's untimely death from illness a young Haruka leaves an offering at the shrine of these gods in the hope that they return her mother.  Of course, this never transpires, but many years later a teenage Haruka still finds herself missing her mother, and more pivotally to this story pining over a long-lost and precious mirror than belonged to her mum as one of her most treasured possessions.

With life at home with her hard-working, single parent father proving to be tough, Haruka finds herself once again visiting the shrine in a plea for the gods to at least return the missing mirror, before dozing off in the autumn sun.  Upon awakening, Haruka spies a strange creature which seems not entirely unlike the characters in the story from her youth, and after the being in question takes her key chain from right under her nose she decides to surreptitiously follow the little fellow.  Before she knows it, Haruka is transported to a world beyond her wildest imagination; a potentially troublesome world for both Haruka and the creature she was following, a cute if odd-looking little fellow who goes by the name of Teo.

In that typical manner redolent of teenagers (or teenagers in anime, at least), Haruka is less terrified and more fascinated by the world into which she has fallen, and more to the point she soon spies an opportunity to search for the lost mirror which she would love to have returned to her possession once again.  Thus, much to the chagrin of Teo, Haruka sets out into this strange new world in the hunt for her mirror - but little does she realise just how important that exact same mirror is to the most powerful person within Oblivion Island.

Once we move beyond the required scene-setting  which sets all of the wheels of this film in motion and enter Oblivion Island itself, it soon becomes clear just how inventive Haruka and the Magic Mirror can be.  Its denizens walk the tightrope between cute and strange perfectly, but more importantly the world these beings have built around them is a never-ending source of visual wonder - as a world of creatures who can create nothing for themselves, their world is one where the Borrowers meets the Wombles; a land where the junk and forgotten items of humanity are put to imaginative use in the everyday lives of its new owners.  The settings provided by these constructions is endlessly gloriously to look at, and occasionally brushes against the realms of the spectacular as the tail-end of the film delves into some break-neck action and bit set pieces where this scenery takes on a pivotal role.

While all of the characters and much of Oblivion Island itself are rendered via 3D CG animation, some backdrops are still provided in a tradition hand-drawn style, particularly back in the human world - this doesn't prove as jarring as you might expect, and actually looks rather good on occasion.  The characters themselves aren't anything near Pixar quality in terms of their movement and facial expressions, which is a little discomfiting early in the film in particular, but overall the quality is good enough so as not to trouble the "uncanny valley" and (perhaps more importantly) the entertainment on offer soon extinguishes any negative thoughts about the animation on show.

Haruka and the Magic Mirror's plot and story won't shock and amaze you by any stretch of the imagination - in many ways it's about as obvious and generic as they come - but it's carried with such gusto that it's still great fun to watch.  Haruka is a great foil for the story as an energetic and confident girl but with enough deep-seated troubles to pull off the emotional side of the story, while Teo plays perfectly against her as the film progresses.  The movie as a whole knows when to be funny, when to be poignant (and genuinely quite tear-jerking at one point) and when to deliver some edge of your seat action, leaving us with a near-perfectly paced movie which does everything that it intends to with enthusiastic endeavour.

Given its placement as a children's movie and family film, there isn't really a lot we can say to fault Oblivion Island - it has an enjoyable concept which it delivers on admirably, and although it might not have quite the flair, panache or ability to knowingly nod towards the grown-ups in the audience (unless a couple of panty shots count!) offered by Pixar or Dreamworks' more impressive CG output, it's a charming movie in its own right that will surely appeal even to those with no interest in Japanese culture.  Here is a film that deserves a wider viewing above and beyond that of anime fandom - here's hoping that it gains that recognition in the UK at some point via a proper release.

Oblivion Island: Haruka and the Magic Mirror was screened at the Scotland Loves Anime 2011 event in Edinburgh

8
A charming, energetic and fun family film - it might not quite meet Pixar's high standards, but this is nonetheless a great showing from Production I.G.
LATEST REVIEWS