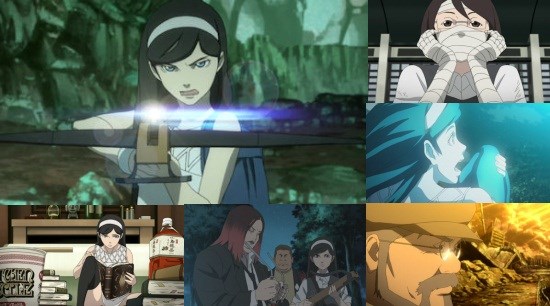 Of all the series to make their entrance during the often quiet summer anime season, Occult Academy was arguably one of the most striking - not in terms of pandering to fans with violence or sexual content, but instead with a sharp and irreverent brand of wit coupled to a wider story that clearly wasn't taking itself too seriously; a heady mixture which led to us comparing the show to the original Ghostbusters movie when we reviewed the first few episodes of the show.

Thankfully, Occult Academy doesn't lose that sense of fun as the series continues - if anything, it sharpens its comic knives even further, happily using its clumsier characters as fall guys (and girls) for whatever ridiculous goings-on the series wishes to lavish upon them.  Indeed, this sometimes develops into running gags, best exemplified by Maya's class mate Kozue who constantly complains about having not experienced anything occult in her life precisely because she frequently ends up slap-bang in the middle of those odd happenings, leaving her unable to recall them.

The further you progress through the series, so you begin to wonder whether its writers have actually remembered that the show has a central premise - isn't there a forthcoming alien invasion to worry about and prevent or something?  It's almost with a feeling of reluctance that Occult Academy finally turns its attention towards the big picture, firstly via a terribly mediocre two-episode story arc designed to put everything on a steadier, less zany footing that instead threatens to have you reaching for the "stop" button on account of how tepid and out of place it feels.

Luckily once this unnecessary distraction is out of the way, the series delivers a rip-roaring finale to the series, first by turning everything on its head in spectacular and vicious fashion, before topping that with an ending that is so ridiculous in many respects that it somehow fits in perfectly with the show's care-free nature.  Although these instalments lose a lot of the humour and slapstick tomfoolery that punctuated the first half of the series, they do serve as a perfect example of what Occult Academy is all about - entertaining the viewer, intricacy and "common sense" be damned.

It's this free and easy attitude towards its subject matter that makes Occult Academy such a surprising success - while some anime can destroy itself in a mire of nonsensical or contradictory plot developments, this series creates an environment where there's never any pressure of internal consistency and where you don't mind seemingly stupid concepts or occurrences being explained away.  This leaves us with a pure, unadulterated sense of fun that allows you to get wrapped up in the world of Waldstein Academy and its various characters without losing the ability to laugh long and hard at what you're watching.

If you can ignore the pair of episodes where the series suddenly loses its way and joie de vivre, Occult Academy is outright, simple entertainment from beginning to end.  Want to see supernatural creatures despatched a keytar?  How about scrapping with demonic grannies using a giant spanner and some dowsing rods?  If concepts like that bring even the faintest smile to your face, this is a series you simply have to watch.  What a shame then that this original concept looks likely to be the final outing for TV Tokyo's "Anime no Chikara" (the Power of Anime) project - when it's on-form it's truly an unpolished gem amidst the rough of all those manga and novel adaptations.

7
A couple of dud episodes take a little of the sheen off what is otherwise amongst the most entertaining anime Japan has brought us this year.
LATEST REVIEWS