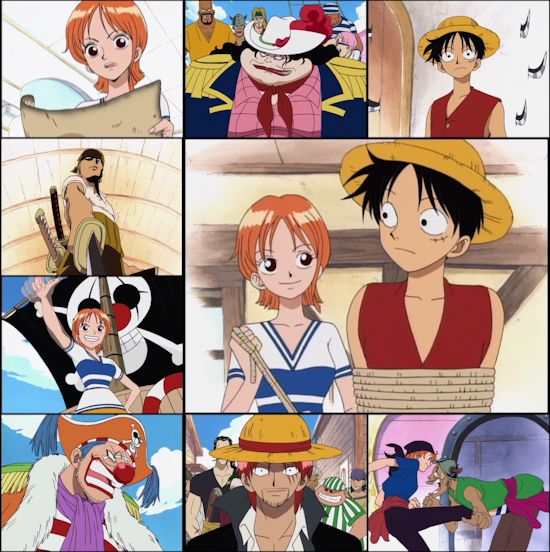 You've been asking for it for what seems like forever (yes, you, reading this - we know all about you, so don't deny it) and finally it's arrived - One Piece is here in animated form in the UK! After all of the hype and constant perstering to see it licensed, it's finally time to see what all the fuss is about regarding this sensation of a Japanese franchise which dominates all others. So, let's shiver our plank and walk the timbers to put it through its paces! We're nothing if not bona fide pirate experts here at UK Anime, I'll have you know.

One Piece quickly introduces us to what it calls the "Great Pirate era", a time brought about by the final words of the so-called King of Pirates before his death, claiming that all of the treasures he amassed are out there somewhere and up for grabs - exactly the kind of proclamation that was only ever going to bring about a mass exodus to the seas in the search for such treasure.

Having been introduced to one rather nefarious female pirate in short order, the introduction of our protagonist does little to mark him out as anything remotely resembling your typical sea-farer, not least because he's dredged up inside a barrel in the middle of the ocean. However, the chipper fellow who goes by the name of Monkey D. Luffy has a dream - to become the next King of Pirates. This seems preposterous until we also discover that he's also packing a rather impressive talent - a rubber body that he can stretch in all kinds of insane ways, on account of having eaten a "Devil's Fruit" which granted him that power.

From the humbling beginnings at the bottom of a barrel, this first collection of twenty-six episodes focuses almost entirely on watching Luffy building up his crew from nothing, acquiring a ship and some suitably impressive colleagues to help him work towards his goal. Of course, this isn't as simple as simply putting a "staff wanted" advertisment up in the local Job Centre, and thus even these early steps in Luffy's career take him on a number of adventures packed with larger than life friends and foes that he and his slowly but surely growing crew have to face to proceed.

In fact, "larger than life" is a phrase that could be used very frequently when it comes to discussing One Piece - in many ways, the series is very much a cartoon in the purest sense of the world with its cast of bizarre looking (and acting, more often than not) characters. From pirate clowns onwards, the world of One Piece is a decidedly unreal one, which in turn allows it to play fast and loose with whatever takes its fancy without so much as scratching the viewer's suspension of disbelief. The downside of this is that there isn't much depth to most of the characters outside of the main cast - the baddies are utterly, irredeemably corrupt and the good guys are innocence personified and horribly down-trodden thanks to those mean, bad people.

That isn't to say that these episodes are nothing but overblown silliness however - every story arc has an emotional punch which the series packs with some force when it comes down to it, and the most memorable moments of this volume tends to be those that leave a slight lump in your throat when they hit home. It's these occurrences which are the saving grace of this episode, as for the most part the stories related in this first collection are slooooow. We've become used to series such as this flying out of the gates and then slowing down over time, but in comparison One Piece's pace is leisurely from the get go - this isn't a show that's keen to hurry through its early material. This can be rather frustrating while Luffy is still collecting up the cast, as for all of the stories that spring from his search for crew-mates we can't help wishing that he'd just get on with it and move on to what must surely be some juicier material.

Aesthetically, and thanks to that aforementioned cartoon styling, One Piece is a show you'll either love or hate - personally, I don't have a problem with its character designs or the colourful world they inhabit, and they fit in with the tone of the series perfectly. Both the Japanese and English audio tracks are great, with a thoroughly enjoyable English dub in particular bolstered by some occasionally strong use of a 5.1 surround sound track, offset slightly by the rather cheesy English language versions of the show's opening and closing themes. One or two miniscule errors aside, the subtitle track is also strong, so overall there are no complaints to be had with this release.

Taken as a whole, this first One Piece collection is a difficult one to sum up - the things it does well it really does do excellently, and for a series with so many episodes I can't begrudge the amount of time it spends scene-setting and building up its cast before things really get underway. On the other hand, it's difficult not to compare these episodes to another more recent series which operates with a similar goal, Fairy Tail, which ultimately offers far more entertainment and humour per episode that this first One Piece collection musters. Given a choice between the two, I'd pick Fairy Tail every time but given its popularity and acclaim, and on account of its length, there's plenty of time for One Piece to make me eat my words.

English 5.1 and Japanese stereo audio with English subtitles.  Extras consist of text-free opening and ending credits, and US voice cast commentaries for episodes one and seventeen.

6
Its emotional impact and sense of world-building can't be doubted, but the glacially slow pace of this first collection of episodes make this a challenging introduction to the series.
COMMENT AND DISCUSS
blog comments powered by Disqus