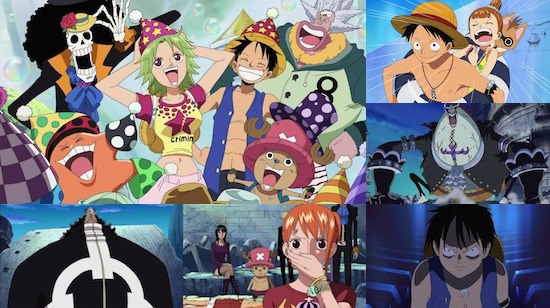 One Piece - Collection 16 begins where the last collection left off, in the middle of the Straw Hat’s battle with Gekko Moria and his giant zombie Oars. I ended my review of One Piece - Collection 15 with the words: “I just hope the next collection doesn’t prove to be anti-climactic because of the decision of where to cut off this one.” - Well, I’m afraid I have bad news on that front. Cutting the battle where they have has really spoilt the flow of the fight. Worse still, it was completely unnecessary because there were only a few episodes of it left to run, which now make up the opening few episodes of this collection. Severed from the context and flow of the previous collection the conclusion of the battle falls flat, losing any tension and excitement that had been built up.

Once that battle is over, and everyone is finally reunited with their shadows, the Straw Hats find themselves faced with a new and altogether tougher challenge: Bartholomew Kuma, another of the Seven Warlords of the Sea. Kuma arrived on Thriller Bark ostensibly to deliver a message to Moria, but now it seems he has been ordered to kill everyone. This means that things are not looking good for the Straw Hats. The crew is already exhausted to the point of breaking from their battle with Moria, and another of the Seven Warlords of the Sea may be far more then they can handle...

Once the events on Thriller Bark are wrapped up Brook officially joins the crew and after a little party the Straw Hats set sail for The New World. It’s around this point in the Collection that things take a turn for the worse. There are a whole host of episodes consisting of little more than flashbacks to Brook’s past, which add little (if anything) to the story, and if I have to hear Binks' Brew/Sake one more time I may scream. These are followed up by the filler arc “Spa Island”. If I tell you that it reintroduces Foxy that is probably all you need to know about the quality of the arc.

It soon transpires that in order to reach The New World, the Straw Hats have two choices: Pass by Marine Headquarters and through the seat of the World Government or take the tradesman’s entrance, via an underwater tunnel. Clearly, being outlaws with huge bounties on their heads, the Straw Hat pirates have only one choice. However, before they can traverse the underwater tunnel they need to visit the Sabaody Archipelago to have their ship ‘treated’ with a special coating which makes the underwater journey possible.

Luckily for us things start to improve once the Straw Hats rescue a mermaid named Camie, who offers to aid them in their quest to reach The New World, by taking them to Fishman Island. Though not before the pirates have dealt with a band of kidnappers, called they Flying Fish Riders, whose boss has an eerily familiar face.  The episodes surrounding the Flying Fish Riders offer some genuinely hilarious, even laugh out loud, moments. They represent One Piece at it’s playful, humorous best. Though as ever some of the gags are stretched a little too far. One gag in particular, riffing off an already long running gag, offers perhaps the funniest moment of the entire series, but is eventually taken beyond the point of absurdity.

It is around this point that the animation quality takes a massive nosedive. One Piece isn’t exactly known for it’s animation quality, but it really dives off a cliff in this collection. This is a real shame, as the drop coincides with the introduction of a lot of new characters and some exciting developments. It also coincides with the series' pace really starting to pick-up. Perhaps poor animation is the price we have to pay to avoid the glacial pacing One Piece has become infamous for.

The Sabaody Archipelago is currently playing host to eleven “Supernovas”, the strongest of the new wave of pirates, as well as being frequented by the Celestial Dragons (also known as the World Nobles) and their Marine protectors. It is said that should anyone threaten a Celestial Dragon they have the power to call down a Marine Admiral to deal with their foe. The Celestial Dragons are the wealthy ruling class of the One Piece universe, and they are a nasty bunch - trading in slaves and treating everyone else as inferior. Naturally Luffy and co. are bound to cross paths with them sooner or later.

The final third or so of the collection really picks up the pace, things start happening thick and fast. For the first time in a long time while watching One Piece I found myself on the edge of my seat, craving the next episode, and the next. Right up until the inevitable happens and, just as everything starts coming to a head, the collection ends. Unlike the last collection this one ends in the perfect place, right on a cliff hanger - it leaves you dangling and craving more.

This collection houses some of the best One Piece episodes to date, and really leaves you longing for the next set, but taken as a whole it’s a mixed bag. The beginning is mostly good, the middle is tedious, and the end is excellent. I would go so far as to say that the end of this collection represents one of the high points of the series so far, bring on the next one…

English 5.1 surround and Japanese stereo audio with English subtitles. Extras consist of commentary, textless openings and closing credits, On The Boat – Behind The Scenes feature.

7
Some of the best episodes One Piece has to offer, but somewhat diluted by filler and a drop in animation quality.
LATEST REVIEWS