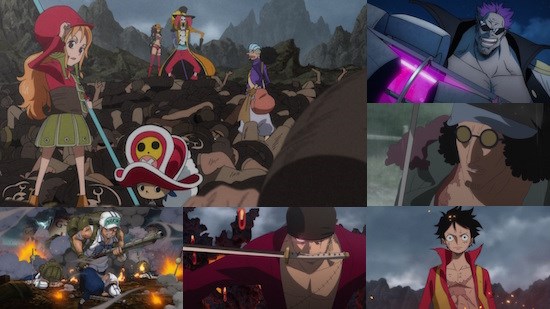 One Piece Film: Z starts as it means to go on, with a frantic battle between the Marines and the Neo Marines as the latter attempt to steal the former’s Dyna stones. Dyna stones, it seems, are a weapon of mass destruction held by the Marines under maximum security as they are considered almost equal in destructive power to the legendary ancient weapons of the One Piece universe. The Neo Marines meanwhile are a rival group set up by a disgruntled former Marine now known simply as Z, who has made it his mission to wipeout all pirates at any cost.

It’s shortly after this opening battle that the Straw Hats make their first appearance: Rescuing and patching up Z, who they find unconscious and adrift on the sea. Unsurprisingly rescuing a pirate-hating former Marine turns out to be a bad move for the gang, who end up beaten and barely escape with their lives and a severely battered ship after Z’s crew arrive to retrieve him. The encounter also leaves a few members of the Straw Hat crew twelve years younger thanks to one of Z’s officers’ devil fruit powers. Naturally, Luffy being Luffy he immediately swears vengeance, but he couldn’t care less about Z’s deadly mission.

Despite Luffy’s indifference, the Neo Marines’ mission poses a major problem for everyone. Z’s plan won’t just kill all the pirates but would also wipe out everyone else in the New World. That constitutes unacceptable collateral damage even for the Marines, so they throw everything they have at Z and the Neo Marines. Therein lies the main joy of watching Film Z - The Straw Hats, the Marines and the Neo Marines go all out against each other, and that makes for some fantastic action set-pieces.

Once all that introduction is out of the way the film rarely pauses for breath, providing almost wall-to-wall action. This could be argued to be one of the films flaws, as there really isn’t much space given to plot in the film's 108 minute running time. However, this is One Piece and if you’re still watching it by this eleventh film you will appreciate that the action, as always, is where One Piece really shines. However, being the eleventh One Piece film does pose a problem for those of us following the Manga Entertainment release of the series here in the UK. This is because the film is set at a time in the series canon far in advance of what has been released on DVD here so far. There are new characters, new powers, even new scars which will be a complete mystery to you if you have been following the UK release of the series. Unsurprisingly given that fact there are quite a few series spoilers thrown into One Piece Film: Z, so consider yourself warned if you are spoiler averse.

The animation quality of One Piece Film: Z is of a high standard throughout, the battle scenes in particular really shine, as you might expect from a One Piece film. The inclusion of DTS-HD Master Audio is also a very welcome addition. Sadly however, there are no extras to be found here, not even a solitary trailer. This could be excused somewhat if this were part of a compilation or a discounted release, but as a standalone full price release in 2015 it really is unforgivable. That said, the film stands alone quite nicely and it’s balls to the wall action provides oodles of entertainment, along with some of the best fight scenes in the entire cinematic side of the One Piece franchise.

English and Japanese DTS-HD Master Audio with English subtitles. There are no extras on the disc.

7
Full bore One Piece action throughout with just enough story to tie it all together... but a severe lack of on-disc content sullies this release somewhat.
LATEST REVIEWS